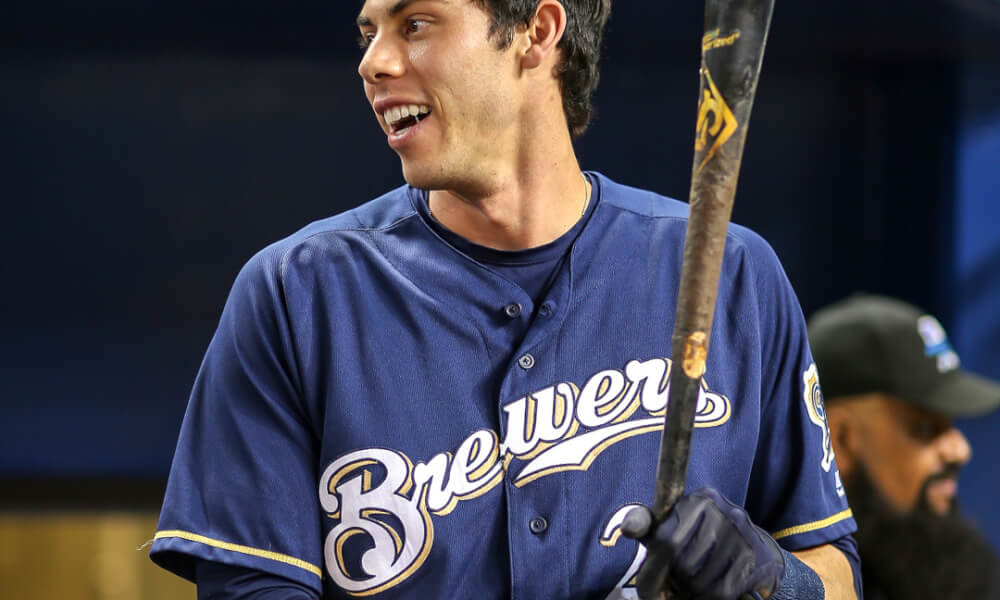 After tearing up the National League in the second half, Yelich has made himself the clear MVP frontrunner. Known in the past for his Gold Glove days with the Marlins and his striking resemblance to SNL’s Pete Davidson, he’s been the biggest reason why the Brewers blew past the Cubs in 2018. The Brewers outfielder has had put up monster numbers since his 8th inning home run in his first All-Star Game back in July.  In this post, we’ll take a look at the tools that Yelich brings out to the field.

The Crew’s skipper may have a point. 👀➡️

Yelich keeps it pretty simple and consistent with his gear, just like his hitting approach.  “If it ain’t broke, don’t fix it.” Yelich is an Under Armour athlete, and rocks an old model of the Under Armour Yard Mid ST from a few years back. You can find these Yard ST Mids still available for a huge discount here. Like his cleats, his batting gloves are also UA Yards. These are the new version of the batting gloves and have helped Yelich swing his way to his first batting title.  Yelich’s all-navy colorway is unavailable but there are four colorways available here. The bat that’s been causing all the damage is his Louisville Slugger Maple S318 Bat. It’s a 34 inch, 31 ounce end-loaded model. Yelich’s S318 bat is cupped on the end which creates a more balanced feel, while also allowing for a more dense piece of wood.  How?  At the beginning of the bat production process, Louisville Slugger selects a billet (piece of wood) that will fulfill Yelich’s requirement of a 31 ounce weight.  Since they know they’ll be cupping the bat, it allows them to select a more dense billet than they would if he did not request a cupped end.  A healthy dose of pine tar below the label and on the handle provide a sure grip. You can purchase the model as a custom bat on LS’s website here. He wears an Evoshield Evocharge Leg Guard with custom straps just in case he barrels a ball into his shin.  That’s a smart play when the ball is leaving your bat at 93.3 mph, on average.  Shop the leg guard here. Yelich joined the C-Flap (facial protection) movement like so many others this year.  At WPW, we are huge fans of the look of the C-Flap, and the protection it offers the batter makes it an easy choice. Shop the C-Flap here. His PRO303-6KB Heart of the Hide glove with gold labels has served him well.  The H-web is the standard web for most MLB outfielders. This colorway is simple, while the gold patches set it apart and compliment the Brewers gold beautifully. You can shop this glove here.