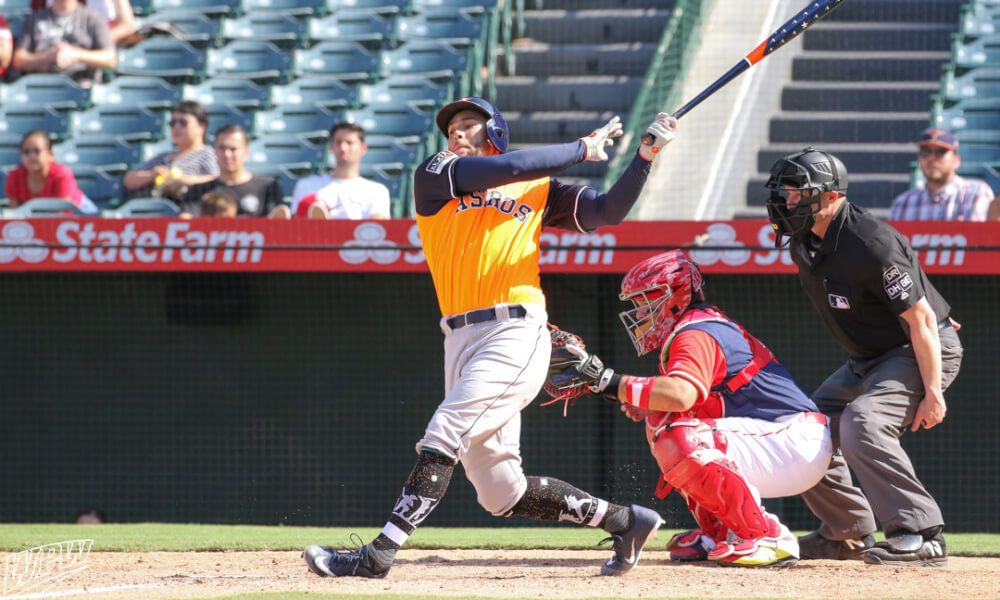 As he’s done in the past, it looks like George Springer is leading a new cleat for Nike, what looks to be the Vapor Ultrafly 2. We caught George wearing them in a no-nonsense navy and white colorway during Player’s Weekend, the same one he’s been rocking since the All-Star Game.  Let’s take a good look at these cleats and see what we might expect when they drop on October 1. The model features a fused mesh upper with a synthetic toe cover for extra durability, and what looks like new anatomical lacing system that runs down the ridge of the foot. Nike has nixed Flywire, which might not be such a bad thing, as my experience has been that it’s more of a design aesthetic than a functional performance component. There is no wasted material here, providing comfort and breathability with a lockdown fit. Looks almost like a soccer cleat and probably feels like one, too. It looks like Nike is employing an updated hybrid set-up, utilizing an 8-spike configuration with two molded studs in the front and a full TPU plate. According to Nike’s product catalog, the new Ultrafly will again feature a full Lunar midsole for enhanced comfort. I’ve been a big fan of the Lunar midsole in past models. It’s responsive and brings you closer to the ground without sacrificing comfort. These two combined elements should ensure you make plays and feel good after the game. These look even more low-profile and form fitting than the original Ultrafly, and Nike seems to be moving towards something like the Adidas adizero Afterburners, trying to sell to speedy guys. Springer has been rocking Vapor models since at least the 2015 Lunar Vapor Pros, and it’s easy to see why. The low-profile setup helps make Springer a pitcher’s best friend in the outfield, turning hits into outs. Definitely looking forward to these bad boys coming out. They’ll probably be great for outfielders and middle infielders looking to get a quick reaction in the field, or anyone looking to shed a couple milliseconds off of their time from home to first. Look for them to release October 1. Here’s a link to original Ultrafly model, which can be found on sale for as low as $55 in some colorways if you’re a bargain hunter.