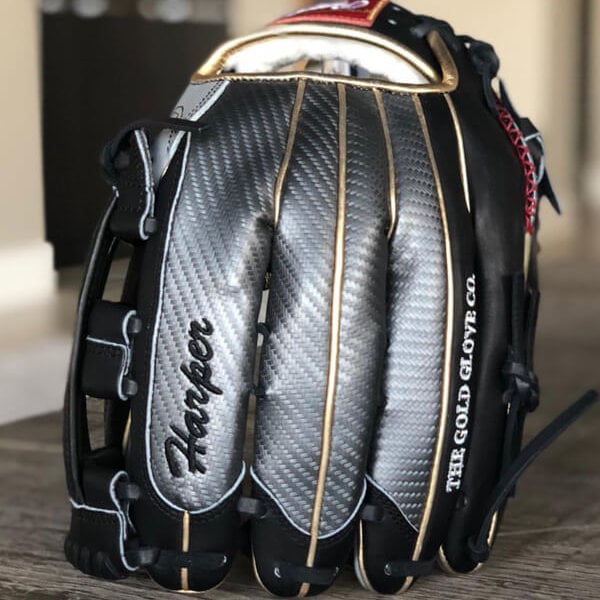 Get a Rawlings “Hyper Shell” Glove like Bryce Harper

It was mid-January when Bryce Harper tagged WPW on a post featuring his gloves for the 2018 season, and ever since seeing the picture, I’ve been fascinated by the idea of the Carbon Fiber material used on one of the remarkably ornate gloves that he featured that day.

Eight months later, you can now get a glove with this same “Hyper Shell” back that Harper received before the 2018 MLB season.

What is “Hyper Shell?” We’ve seen many different synthetic materials used on baseball gloves, like Wilson’s use of Superskin and Rawlings’ use of Mesh. And the reasoning for using these non-leather materials was simple: to make the glove lighter and easier to play with. The same is true for the Hyper Shell material, which, in essence, is a carbon fiber-like material that has both a shiny texture and slick surface. When it’s used on the back of the glove, it gives a neck-snapping look and an overall lighter feel (it’s estimated to be about 15% lighter) to the mitt.  The only question we have about the Hyper Shell material relates to its durability. Because it’s a rather new material to be used on baseball gloves, we’re unsure about how well it will stand up to daily use. We expect it to be similar in this regard to mesh, which, in our opinion, is slightly less durable than leather. There are three models available RIGHT NOW with a Hyper Shell back: an infield glove, an outfield glove (like Harper’s Glove), and a catcher’s glove, all of which employ Heart of the Hide leather on the remainder of the glove. Here’s a breakdown of each:

Rawlings Heart of the Hide PRO204-2BCF The PRO204-2BCF is an 11.5″ infield model in Rawlings’ famous 204 pattern, meaning it comes with a thumb-to-pinky close and shallow pocket. This is a great choice for shortstop or second base if you’re looking for a slightly lighter glove for the middle infield.

Rawlings Heart of the Hide PRO3039-6BCF The outfield model with a Hyper Shell back is the Rawlings Heart of the Hide PRO3039-6BCF, a 12.75″ mitt with an H-web and deep pocket. It’s an awesome option for outfield, as the 3039 pattern is one of the best on the market and the lighter weight makes it easier to handle.

Rawlings Heart of the Hide PROCM41BCF The PROCM41BCF is a 34″ catcher’s mitt with the Hyper Shell back, making it an excellent option behind the dish for those that want a lighter catcher’s mitt. But while it may weigh less (a plus for catchers), I’m still unsure about the material’s durability.

What do you think about the Hyper Shell look?

Anyone out there have one and can speak to its durability?