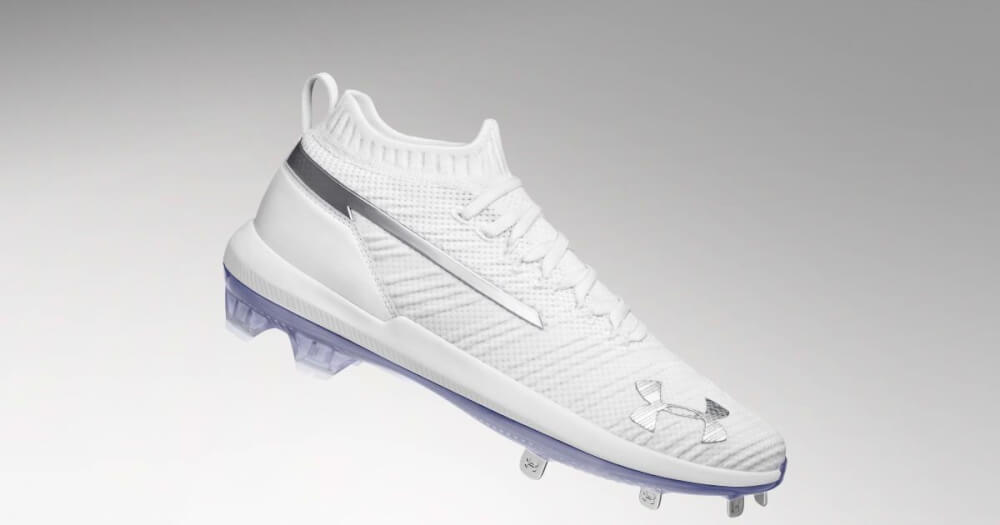 On 11/1, Under Armour officially released the newest iteration of Bryce Harper’s signature line, the Harper 3.  Already one of the most electrifying hitters in the game, Harper’s cleat line, with which he’s heavily involved, continues to raise the bar for style and function every year.  After debuting the Harper 3 as a military-appreciation custom cleat for Memorial Day 2018, Bryce has alternated between mid and low-top versions of the Harper 3.  Since its debut, it has been one of the cleanest cleats in baseball.    Let’s take a look at what went into the model, starting with a video courtesy of Under Armour.

Inspiration Behind the Harper 3

BRING. US. YOUR. GOAT. EMOJIS.

The challenge for Under Armour with the Harper 3 was to capture the excitement of Bryce’s play while acknowledging his off the field style and interests; to create a timeless look with modern flair and innovation. At first glance, the two most prominent elements are the ripped knit stitching and the chrome accent running along the upper. The no-frills approach is rounded out by a leather heel counter that wraps around to the medial side and a hybrid cleat plate, along with a strap on the mid-top version. The accent is inspired by Harper’s love of classic American muscle cars. It creates a nice division along the upper that adds to the design’s versatility while projecting speed and flashiness. The Harper 3 is also UA’s first baseball cleat to feature a woven upper.  Its ribbed texture is inspired by one of Harper’s favorite wardrobe staples: Daytona leather jackets. The new knit fuses performance versatility with a minimalistic and elegant design aesthetic.  The Harper 3 is more subdued than Bryce’s on-field playing style, but fits his razor sharp off-field style perfectly. The insoles feature the most personal details of the cleat, listing many of Harper’s personal achievements and what is dear to him most.  In green, shoutouts to his family, his hometown (Las Vegas area code 702), his favorite bible verse (Luke 1:37; “For nothing will be impossible with God”), and KMH, his wife’s initials.

Bryce’s Involvement in the Harper 3

Harper doesn’t see himself as just a baseball player, and he remains deeply engaged in the process of creating his shoe.  Bryce tells WPW that he and two UA employees work on his cleat line, and Bryce credits his two counterparts as “young guys that understand the fashion side and the playing side.  (They) understand my style and the trends of my style.”

“I love every minute and step of (the design process)…  We are a great team.” With the 2015 NL MVP’s input, the Harper 3 continues the trend of bringing a sneaker-feel to the diamond. The main design addition to the Harper 3 is the woven upper. Along with its aesthetic benefits, the design is targeted to provide support and breathability while being extremely light. A TPU coating wraps around high-wear areas for increased durability. One of our favorite features in the Harper 2, and a feature that Bryce pioneered early in his career, is the hybrid cleat plate. Harper is the first baseball player, as far as we know (please comment if you can prove us wrong), to adopt the hybrid set-up which is steadily gaining popularity among serious ballplayers.  Metal spikes provide optimal front-foot traction for a quick first step while a more forgiving molded heel reduces standing fatigue.  Any ballplayer who plays 4+ nights a week in the summer knows what standing fatigue is.  While Nike continues to opt for integration of the molded spikes with metal, and New Balance now offers a composite plate (COMPV1), Harper and Under Armour remain committed to the segmented approach in the Harper 3. Another new element is an asymmetrical midsole coupled with Charged Cushioning. Tailored to provide support during Harper’s swing, Under Armour claims the design “produces a support zone in the lateral forefoot” with “a durability zone in the heel,” while remaining low-profile and close to the ground.

What Type of Player Should Wear this Cleat? We asked Harper 3 designer Spencer Hawkins, “what type of player should wear this cleat?”  Here’s what he had to say:

“Anyone who wants to perform as well as they look. This cleat was designed to mix the dichotomy of performance and fashion, of modern and traditional, to make a statement on the field.”

The Harper 3s are sexy (in our opinion), and with the glowing feedback for the new Yards, Under Armour is officially on a hot streak. With the Harper 3 cleat, UA becomes the first company to embrace full-knit construction on the baseball field. This cleat brings sneaker-comfort and a simply fresh look that will stand out on the diamond. Starting at $110, the Harper 3 is a premium cleat that any serious baseball player or Bryce Harper fan needs to consider.

Do you love the Harper 3? Bryce’s repertoire of Players’ Weekend customs (last two photos above) were some of the most imaginative and downright sexy cleats that anyone has worn, and even his everyday game models are fire.  Hopefully UA can hit us with turfs in the future. I would snap those up in a heartbeat.

Shop the Harper 3 lows here and the Mids here. And, if your coach is a WPW guy and cool enough to let you rock them, you can still purchase Harper’s Home Run Derby and All-Star Game models.