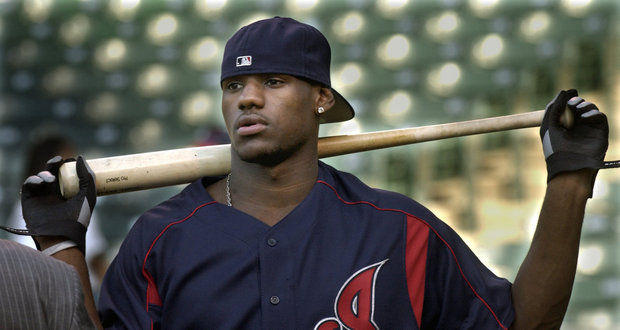 Since every other sports outlet is discussing the news of Lebron James heading back to Cleveland, why not add a bit about him here? Seems fair…if only he played baseball.

But, alas, in 2003 he took some BP before a Cleveland Indians game and, let’s just say, he should be grateful he can play basketball. I am, personally, a fan of LBJ. I know he gets a lot of hate but the guy is an athletic freak and, love him or hate him, he is as exciting a player to watch in basketball than there may ever have been. In baseball, however, rumor is his BP pitches got progressively slower until he shanked an opposite field blooper which ended his exploits at the plate. This data point as well as some others let a few writers tell the world that LBJ stinks at baseball. LBJ may have made a great Wide Receiver (or back up to Tim Howard) but if you want a two sport athlete in both basketball and baseball then the guy you dream of grooving and moving like is Mike.

Either this pitch is coming in like a slow pitch softball or LBJ is about to find another ball on the ground behind him.

Despite his lack of success at the plate, Lebron James Baseball ‘career’ does at least allow us to get a feel for what gear he uses in the box.

As far as we can tell, Lebron James uses Basketball Sneakers when taking batting practice. Our best guess is these: Nike Lebron James white low-top. Sweet looking shoe off the field. At the plate? Well, you did see all those baseballs behind him in the picture, right?

As well, his Cleveland Indian hat is worn backwards. We suggest, rather timidly to a 6 foot 8 inch specimen who could jump over our egos without much thought, until you have stats like these, you put your hat on the right way when trying to hit a baseball.

Black Easton batting gloves with a gray trim are a fine choice as well. We suggest, again rather timidly, that if the idea here is to have batting gloves on for the actual purpose of batting gloves then maybe use that Velcro strap on the wrist to snug them on a bit.

If the goal is to look pretty smooth while getting ready for BP then the basketball low top shoes, a backwards hat and the undone batting gloves may be the right route. Further, when you make 20 Million a year playing basketball, you probably shouldn’t care much about hitting a baseball.

Yet if the idea is to look the part of a two sport athlete, then even  Bo Jackson would appreciate the shot at the top of this article.

This Jacksonesque picture does give us a better view of the bat he uses. The best we can tell from this picture is that he swings an Easton Pro Stix. Maybe. Not that he hits any baseballs with it, but it does look pretty sweet. If he’s interested in a couple tips to put the ball in play, maybe he can start here.

Have fun back in Cleveland LBJ. That city needs you.