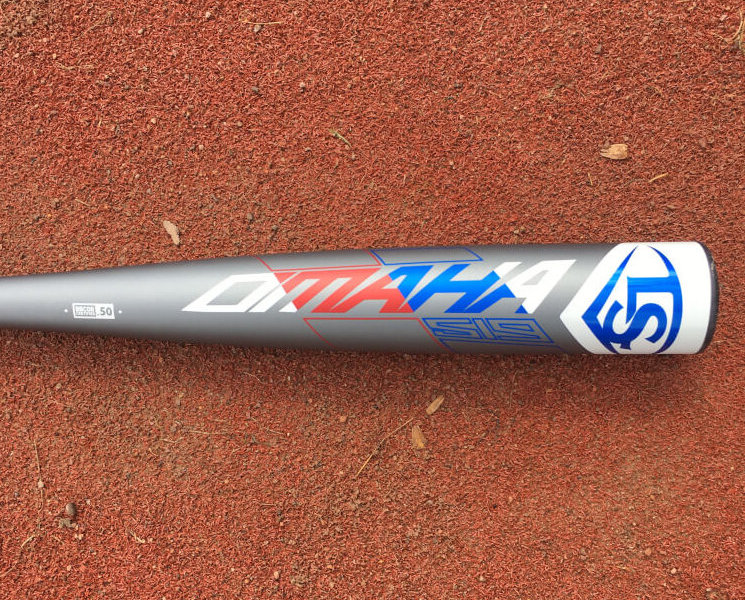 Louisville Slugger’s Omaha 519 is a balanced one-piece that outperformed its price point. This year’s model returns with a new anti-vibration system called VIBEX. The Slugger lineup has a clean look to it this year, and the Omaha is no exception. The base color of the bat is dark gray. The barrel graphics are colored with red, white, and blue. The grip and knob are also dark gray, with a white geometric pattern covering the grip and part of the handle. The handle includes ‘Omaha 519’ and ‘Louisville’. The 6-Star endcap is red and blue.

Unlike the other three bats in Slugger’s lineup, there’s no custom option for the 519. No word yet on if this is something they’ll add in the future. Louisville Slugger reintroduced their own grips to the 2019 line. Since 2016, Slugger bats were fitted with Lizard Skin grips. The new Louisville Slugger grip feels very similar to a Lizard Skin. I wouldn’t be able to tell the difference just by feel. Obviously, that means its a quality stock grip. Slugger uses a slightly different grip and smaller knob configuration on their one-piece bats. This is all a part of the Vibex Vibration Dampening Handle. This technology incorporates a thinner, ergonomic knob with a grip that is longer than those found on the multi-piece bats. The Omaha grip is about an inch longer than the Prime 919 and Select 719 grips.

I preferred this configuration because of the smaller knob. While knob style is ultimately based on each hitter’s preference, a lot of hitters will find the low profile knob on the 519 to be very comfortable.

The Omaha is a balanced bat that is essentially a slightly heavier version of the Solo 619. They have the same profile, with the only noticeable difference being the endcap. The Omaha is fitted with Slugger’s 6-Star endcap, which adds a little weight to the barrel. This weight makes the Omaha feel more like a wood bat. Personally, I felt that the Omaha fit my swing better than the Solo. I’m a stronger hitter (humble brag) and don’t need the extreme lightness that the Solo offers. The Omaha allowed me to put a little more mass behind the ball while still being very easy to control. Even though I loved it, I’m going to assume that most hitters will like the lightening quick Solo 619 better. However, if you’re one of the few outliers like me who would rather swing wood 24/7, I think you’ll like the feel of the Omaha 519. As you can see, even though it’s heavier than the Solo 619, the Omaha 519 is by no means an excessively heavy bat.

The Omaha 519’s performance was very similar to the Solo 619’s. Its one-piece construction gives it a very stiff feel throughout your swing and at contact. While it is heavier than the Solo, it’s still a balanced bat that is easy to control. I was very satisfied with how comfortable my hands were while hitting and I believe that the grip/knob combination was a big part of this. Slugger’s new VIBEX vibration dampening system did a solid job of knocking out some vibration. The vibrations are definitely still there on mishits, but it didn’t sting as much as some bats I’ve swung in the past. The Omaha has a medium sized barrel that actually has some room for error on either side of the sweet spot. When you make contact with the Omaha, you’ll get more of a subdued ping that won’t burst your eardrums.

The Omaha feels like a more traditional metal bat. It seems to be a tried and true design that simply works. It performs above its price point of $200, making it a very intriguing option for players trying to save some money. Pick one up from Slugger here.