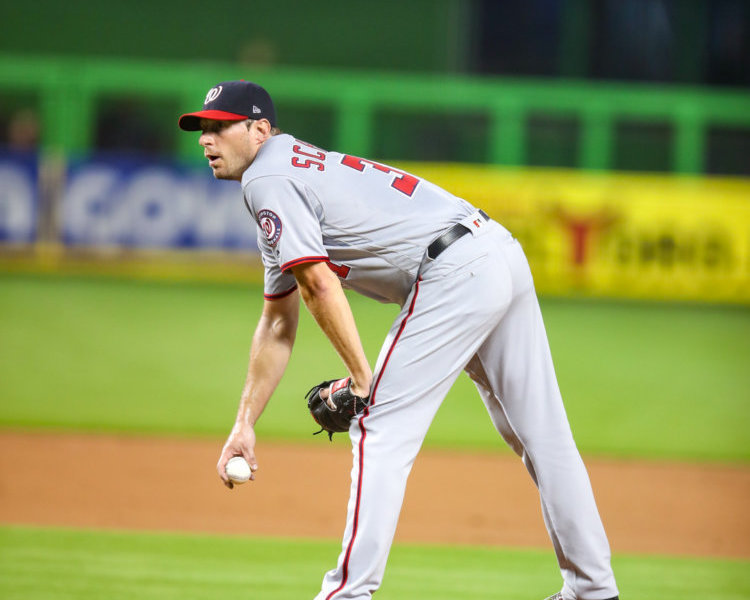 Tonight, Max Scherzer joined Randy Johnson, Curt Schilling, Chris Sale, and Clayton Kershaw as the only pitchers to strike out 300 batters in a season since 2000.  He is the 17th pitcher since 1900 to accomplish this incredible feat of dominance. 300 K’s is rarified air for a starting pitcher.  Mad Max joins one of the most exclusive milestone clubs in the game’s history, with pitching gods like Sandy Koufax, Walter Johnson, and Bob Feller at his side.  Only 17 have ever climbed that mountain.  To put that in perspective, there are 10 more men in the 500 HR Club than there are in the 300 Strikeout Club. His 300th strikeout (Austin Dean for the trivia players) is the exclamation point on a six-year stretch of dominance in which Scherzer has thrown 1,306 innings of 2.82 ball, striking out 11 batters per nine innings in that time.  He got his 300th in a player exclusive pair of Nike Alpha Huarache Elite low cleats.  To Scherzer and his wolf eye, the current Marlins lineup must look like nine bunny rabbits. Have a look at our interview with Scherzer from 2017 and you might notice he doesn’t give two shits about swag.  What he doesn’t realize is that not caring about swag is also a type of swag.  You can see that the plate on Scherzer’s Alpha Huarache Elite cleats is actually an old one borrowed from previous versions of the shoe that Max already liked. We also saw the lower parts of this shoe on a previous version, his player exclusive Nike Air Max MVP Elite 2 3/4 (say that 10 times fast). The plate on his cleat goes back even further than that.  Nike to Scherzer: “Hey Max how’s it g-…”  Scherzer to Nike: “Same as last year. Gotta go shove. Bye.” (Click)  That’s how we envision the cleat convo going for the last six years. If you want to K 300 guys, this is the effort you need to give on every pitch.  Try to punch the guy in the face from 60 feet away for 8 innings. And you need to put it on a dime. Scherzer takes a glove out to the mound mostly because it conceals his grip, less so because he needs it to field.  Contact is unlikely. The dual hinge web on Scherzer’s Rawlings Pro Preferred PROS206-12B glove was also the web choice of the legendary puppet master, 355 game winner Greg Maddux.  You never had a clue what that guy was gonna throw, all you knew was that he was gonna throw it exactly where he wanted it. The finger hood on his Rawlings glove is another feature intended for concealment, as pitchers tend to wiggle their finger for certain grips, which isn’t an option in an iPad world.  Guys like JD Martinez would know before their next AB. The Pro Preferred leather is stiff, another advantage for a player who really wants the stiffest glove possible.  Why stiff?  Why else?  Concealment.  The stiffer the leather, the less the glove will “flare” on a changeup.  In other words, if your glove is too floppy, Big League hitters can look at the back of the glove and tell if you’ve got just two fingers in it, or all five at the same time (fastball vs. changeup grip).  That’s frightening to a mortal like me, but Scherzer is not a fearful man.  He is the fear.