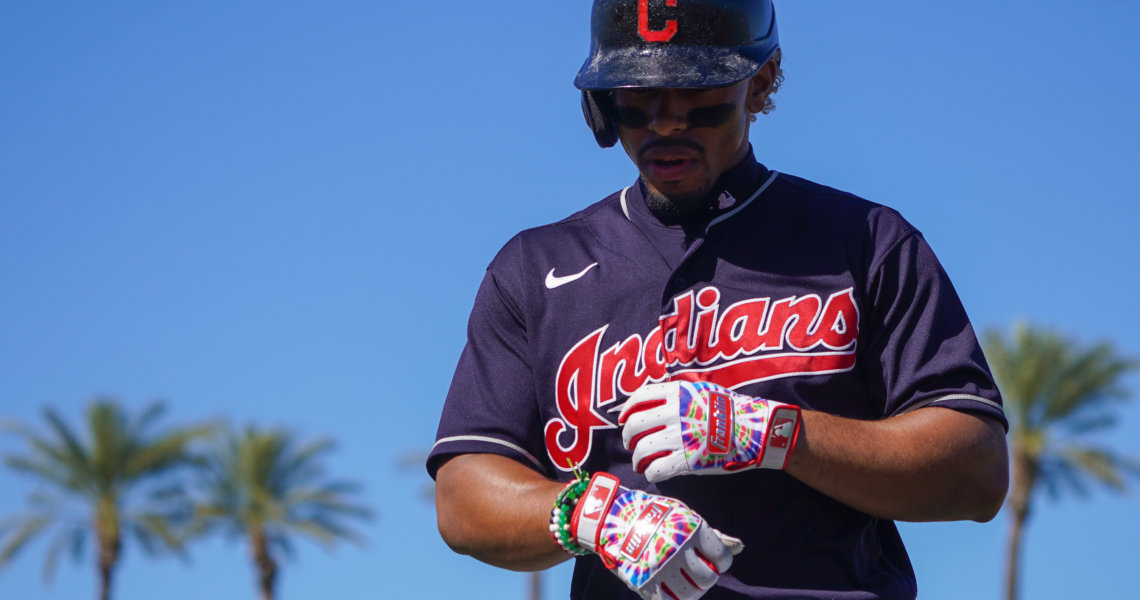 Since Will Ferrell took his BP hacks at Hohokam Stadium in 2015, I’ve been grinding for content at Spring Training. We all owe gratitude to the constantly ahead-of-the-curve Oakland Athletics front office, the first to credential WPW. The A’s opened the door for ballplayers to have an eye on the field.

Despite the pandemic, I got some quality work in over the past month.

Some WPW Spring Tour Facts for you:

We got brick-walled by coronavirus literally the moment I landed in Florida, so the majority of the content is from Arizona. What follows is my favorite 26 moments of the trip with some insights sprinkled in.

Be sure to comment your favorite thing you saw at Spring Training. Why? Because a comment with a valid e-mail automatically enters you into our best giveaway yet.

One lucky commenter will win the custom cleats of his or her choice by Mookie Betts’ custom artist, @ikb20_customs.

The laying down of the bat for the dig-in is so cocky that you’ve got to respect it. In that regard I had to add a 26th item. More Soto here.

Our last video before the quarantine hit, Dom Smith took us through his glove collection. It was spectacular. Coming soon.

Cleats were sneaky customs with some electric effects to match his pitch repertoire.

These have been worn a lot by Dodgers players in-game. Its one of the best on the field without a doubt. Unfortunately, they’re only available in youth sizes.

Guards don’t necessarily get me going like the standard gear, but its notable that Mike Trout is no longer wearing Evoshield guards.

Nike created player exclusive (?) elbow and leg guards that mimic the function of the Evoshields that Trout had worn for years.

Would love to get a closer look at these. Yusei Kikuchi had some sick cleats last year too. Asics is a brand I’d like to see available in the US.

Now that Yadi’s with Jordan, Sean Murphy of the A’s is carrying the CSYM torch for Rawlings. This patent leather chest protector is simply a classic, and looks sick in green. We actually found a set available at Rawlings.com for $200, and its not hard to tell that this is actually a Francisco Cervelli set from his Pirates days. Probably a 1 of 1 that you can get here.

Francisco Lindor is a superstar who’s contract is coming up with a Cleveland team that has never been a big spender. To the public eye, negotiations on a new contract have gone nowhere, and Lindor is squarely on the trading block. Its the perfect cocktail for a guy to start to loaf, sulk, lose interest.

Not Frankie. When I was at Goodyear covering the Angels vs. Indians, it wasn’t that I SAW Lindor’s hustle… I HEARD it. He was driving his legs so hard on a popout that I could hear him coming.

Showing October hustle in March, Lindor seemed to communicate two things to his team; one, that his contract has nothing to do with his effort, and two, that he takes nothing for granted. That’s a leader.

Working with one of the best colorways in baseball, DBack Ketel Marte’s adidas adiZero PEs were some of the sharpest cleats on any field.

Trevor Story has been wearing a new black and camel PRONP2 11.25″ piece that we put together on the custom builder for $360. Here’s Trevor a couple of years back in a Locker Tour with WPW:

Seeing Nolan Arenado play is always a privilege. The PRO12-6TI is a classic and buyable at Rawlings.com for $360.

Its got that same weird tape situation that Turner’s Wilson had under the index finger. Hopefully we’ll have a chance to ask JT about this in a future Locker Tour.

Yadi is a Hall of Famer in every sense of the word. When his career is over, he’ll stand shoulder-to-shoulder with the greats at his position.

As the first ever Jordan catcher, though, his swag might actually be the greatest of all time at the position.

Hard to beat this one. Mets colors are just amazing.

You can’t get this one, but you can shop Cano’s 2019 showstopper at SSK.

There aren’t many brown uniforms in sports. Its a risk that few have ever taken. The Padres are committing to it in 2020. I wasn’t sure what I’d think about them until I saw them in person.

I think they look really good, and I think the brown Padres are going to be much better than the navy ones, so that’s going to make ’em look even better. The socks, worn by Eric Hosmer, are unavailable — if you see them, please comment.

#10 | Alyssa Nakken Suiting Up for the Giants

I felt proud to be an American when I saw Alyssa Nakken, the MLB’s first ever female coach, in a San Francisco Giants uniform.

It wasn’t long ago, in 2006, when Keith Hernandez made headlines saying “I won’t say that women belong in the kitchen, but they don’t belong in the dugout.” Keith did not approve of a female trainer on Bruce Bochy’s Padres staff being in the dugout. Hernandez’ opinion was a popular one at the time, and still exists.

Nakken has broken the mold and, by doing so, shouldered a burden for the females who will come after her. Nakken’s breakthrough is in the spirit of Jackie Robinson. It will not be readily accepted by the close-minded of the baseball community, yet she’s made history despite them.

You know you’re pretty good at pitching when you can pick up 6 W’s for the club while battling Leukemia. That’s how good Carlos Carrasco is. Glove matches the game.

This red snakeskin A2000 B2 with blue/white trim stands out to me as arguably the swaggiest glove of 2020. Possible all-time top 25 favorite for me and I don’t take that lightly.

I’d love to hear your favorite glove(s) ever in the comments.

Just a guilty pleasure, I guess.

They say never meet your heroes because they’re bound to disappoint you. Dee Gordon did the opposite.

Besides being a stolen base champ, batting champ, Gold Glover, and an inspiration to “undersized” athletes all over the world, he was chill AF, humble, and as genuine a person as I’ve met in baseball.

We discussed his friend and teammate, #16 Jose Fernandez, Marlins’ superstar pitcher who died tragically in a boating accident in 2016, and how much we both miss watching him play. This is one of the conversations I’m most excited to bring you guys on our YouTube.

Also this glove model, nicknamed “Charlie Brown” by a WPW commenter, is exclusive to Manny due to the Gold Tan color that we couldn’t find on the custom builder. You can get a similar option at Rawlings.com for $460 (without gold labels). Its a 12.25″ PRO-NP7.

…can be had here. Same length and model. Same price.

You can shop Tatis’ glove at Dick’s Sporting Goods (tan) or (black), Baseball Express, and JustBallgloves.com for $350.

Mauricio Dubon’s AJ1s were my #1 throughout the tour. I’m a fan of solids and simplicity. These have an equal effect whether you’re on the field or in the third deck.

A couple of customizers reminded me that a painted midsole makes them a “one-and-done” since the paint will scuff on dirt.

Dubon seemed to think it was worth it. When he saw that he got a WPW feature, he re-posted and said, “Mom I made it!!!”

His tie-dyed Franklin Pro Classics are a great example of just how far Lindor stays ahead of the game.

The most exclusive glove at Spring Training, Matt Chapman’s new MC26. This is the first time Wilson has added a visual celebration of their Defensive Player of the Year award (around the thumb “W”). This glove is supposed to release with Wilson’s game model lineup later this year.

We first saw this on Rougned Odor (thanks to a WPW follower) and then it popped up on Gold Glover Yolmer Sanchez’ story.

There was already a buzz about it, and finally I met this interesting glove face-to-face when Frankie Lindor brought it out to play. Find more images and info at that link.

Lets hope baseball gets back soon! I’m dying over here!

Be sure to comment your favorite thing you saw at Spring Training… a comment with a valid e-mail automatically enters you into our best giveaway yet.

One lucky commenter will win the custom cleats of his or her choice by Mookie Betts’ custom artist, @ikb20_customs. Official details to follow.