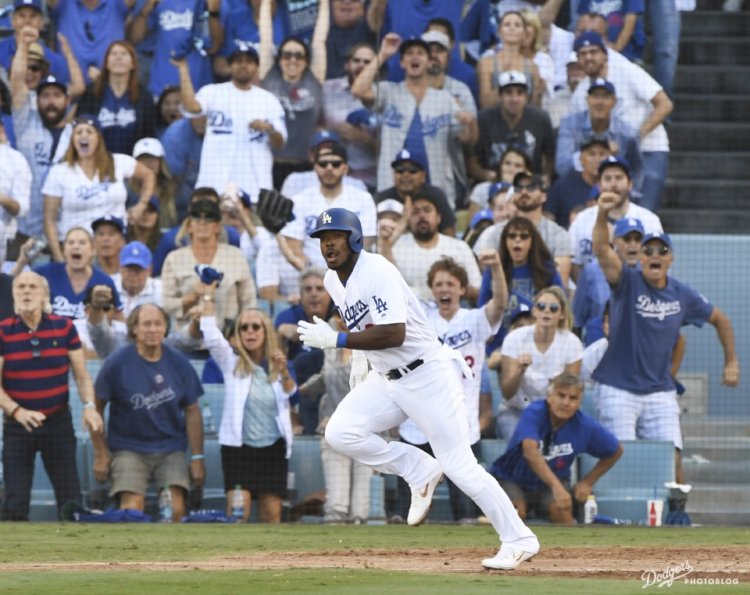 A wild series, this 2018 NLCS.  So many moving parts. Kike Hernandez playing every position on the field.  Relievers warming up before the first pitch.  Hader making Big Leaguers look like beer leaguers.  Machado kicking people.  Puig being Puig.  This series was an epic, and the Dodgers finally dealt the deathblow, Yasiel Puig’s 3-run heat-seeking missile. The Dodgers maintain a spectacular Dodgers photo blog to keep us in the loop with what’s happening on the field.  Above, David Freese goes oppo in a perfect Dodger colorway of the Nike Alpha Huarache Elite 2. The simplicity of this look is near-impossible to beat—like Mr. Freese in October. Manny Machado wore Jordan 9 low turfs and cleats that actually have his own logo as a pattern.  He’s got it so good with Jordan right now that Matt Kemp is hitting him up for some hand-me-downs. Kemp is not above hand-me-downs… neither am I. Jordan 9 Mannywoods. Yelich showed off the gold labels after taking a 2-1 lead on his PRO303-6KB. Check out his other gear here. As as baseball junkie, watching baseball’s best third basemen play the position in the playoffs is a real joy. I don’t give a damn what the metrics say, the eye-test will tell you that Moustakas is a cat at third base. A cat with a hose for an arm. He’s wearing a Rawlings H-Web lately, no longer the drop dead gorgeous single post he’s worn in championship seasons past. Dave Roberts hittin’ switches in the Nike PG 2, and who says coaches can’t have swag. Orlando Arcia had a rough offensive regular season but the relatively undersized shortstop showed big power with 3 bombs in the postseason. He’s barreling balls up with a Marucci Los15, which he’s swung since the minor leagues like his older brother Oswaldo. 33.5″ inch, 31 ounce. Slightly thinner handled than the retail CB15, for a more end-loaded feel. Arcia whips it with Franklin full color chrome CFX Pro batting gloves, available just like Arcia’s here. Puig made his mark as a hitter and did some X-rated hand/mouth gestures in the white-and-gold Alpha Huarache Elite 2, which is available for purchase. Here 23 year old Cody Bellinger stands on 2nd base in the NLCS with the paint still drying on his Nike Alpha Huarache Elite 2 PEs. Cody is LIVING HIS BEST LIFE. Kenley Jansen holds a sub-2 ERA in 42+ playoff innings.  When you’re third on the all-time postseason saves list, you get a stable of Jordan player exclusive cleats, including these 9s (non-PEs available on eBay). Julio Urias threw a few key innings in the new UA Yard cleats. You can get this colorway (and hook up some laces for it) at this link.

Great series from a gear perspective.  Please let us know in the comments what we missed.