A sneaker that Devin Booker sparingly wore in his rookie season was the Nike Kyrie 2.

Not to be confused with the Nike Kyrie Low 2, the mainline Nike Kyrie 2 originally dropped in 2015 and took many elements from the original Kyrie 1. This includes the thick traction that rises to the midsole, a feature that remains a staple on the Kyrie line to this day. A Zoom Air unit is in the heel for a bit of bounce, while the Hyperfuse upper provides durability and added support.

D Book wore a white and orange PE that never released, as seen in the cover image.

You can find the Nike Kyrie 2 at StockX, Flight Club, and Stadium Goods. 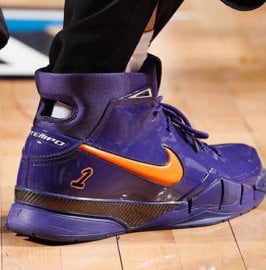