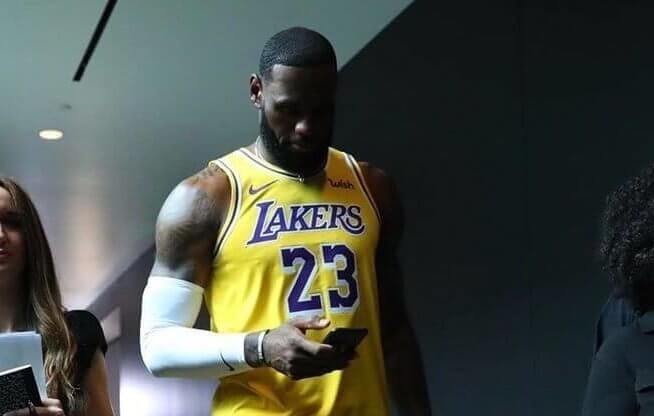 It was day 1 of the 2019 NBA Media Day and the stars were out from the Los Angeles Lakers and Brooklyn Nets. There was no Kawhi Leonard laughing this time around, but other familiar faces were seen in unfamiliar jerseys. Kevin Durant and Kyrie Irving were dressed in black and white. Meanwhile, Anthony Davis finally put on the purple and gold jersey. LeBron James was the main attraction in Los Angeles, after he showed up in a Lakers themed Nike LeBron 7 PE.

Despite LeBron being on the Lakers, the most worn sneakers was still Kobes. Namely the Nike Kobe 4 Protro, as worn by Alex Caruso, Dwight Howard, and Anthony Davis.

Another signature sneaker preview you can expect for the LakeShow is Kostas Antetokounmpo rocking his brother’s Nike Zoom Freak 1.

It wasn’t just Nike who showed out for the LA media day, as Kyle Kuzma pulled up in the Rhude x Puma Alteration. Speculation had been rampant for weeks of Kuz ditching the swoosh for Puma.

Over in Brooklyn, the new look Nets opened media day with some fresh kicks. Superstar Kyrie Irving posted up in the Air Max Plus “Sunset” inspired Nike Kyrie Low 2.

Kevin Durant took in the BK scenery today as well, with his fresh #7 jersey and Nike KD 11s.

Meanwhile in Houston, KD’s formers teammates the Brodie and the Beard were reunited for the Rockets media day. Russell Westbrook stepped in with the Jordan Why Not Zer0.2 SE. James Harden popped off in a blue adidas Harden Vol. 4.

And so concludes what the pros wore during the 2019 NBA Media Day 1. The @WPWBasketball Instagram is currently down due to a false copyright strike, but you can keep up with the site for more media day coverage.