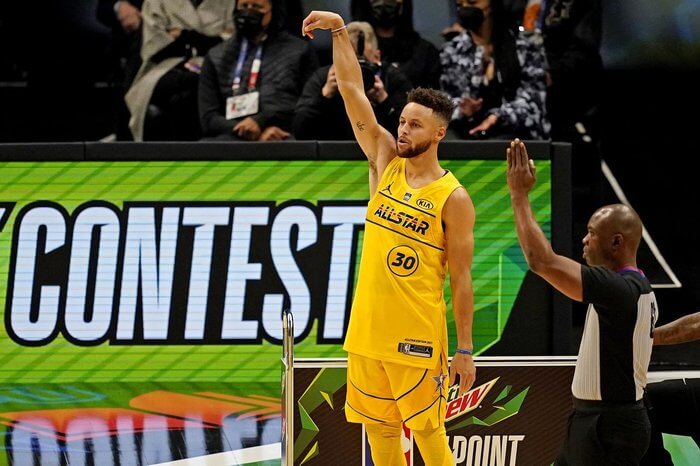 Every Sneaker Worn in the 2021 NBA 3-Point Contest

The NBA switched things up this year, stuffing all of the All-Star festivities in one night to reduce COVID exposure. The 2nd competition on All-Star Sunday was the 2021 NBA 3-Point Contest.

Check below for the highlights, as well as each sneaker worn this year from shooters like Steph Curry and Zach LaVine.

The greatest shooter of all time won his second 3-Point Contest in dramatic fashion, nailing the final moneyball to win the final round by a single point.

Steph rocked his signature Curry Flow 8 this game, opting for the “International Women’s Day” colorway. You can find this purple colorway HERE.

Other Curry Flow 8 colors are available at StockX and GOAT.

Props to Mike Conley for staying ready, as he wasn’t supposed to be at All-Star Weekend in Atlanta. A late scratch by Devin Booker allowed Mike to make his first All-Star Game and 3-Point Contest of his career.

Conley narrowly lost the long range competition in an Air Jordan 35 PE in white and black.

The youngest player in the field, Jayson Tatum made it to the final round of the 3-point contest in a colorful Air Jordan 35 PE.

The rainbow colorway he wore isn’t available, but you can find other colors at StockX and GOAT.

The 2x Dunk Champion took another stab at the 3-point competition this year, although Zach LaVine didn’t advance.

LaVine rocked the adidas Crazy BYW 2.0 tonight, in his LaVine Airlines player edition colorway. You can find other colors of this sneaker at StockX.

Jaylen Brown may not have won the 3-Point Contest, but he won nostalgia points for his footwear. Adorned with custom “HUMBLE & HUNGRY” text, Brown rocked the adidas T-MAC 2 in mismatched red and blue colors. This is an homage to Tracy McGrady’s 2004 All-Star appearance in the same colors, although he wore the T-MAC 3.

These exact colors aren’t available, but you can find other colorways of the adidas T-MAC 2 at StockX and GOAT.