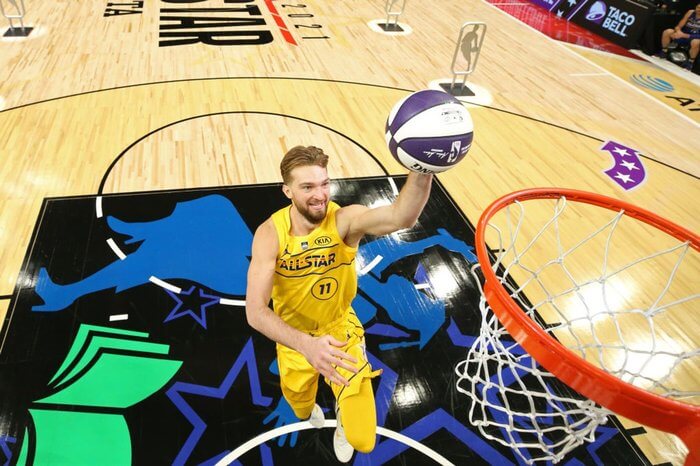 Every Sneaker Worn in the 2021 NBA Skills Challenge

The NBA switched things up this year, stuffing all of the All-Star festivities in one night to reduce COVID exposure. That meant the NBA started Sunday’s events with the 2021 NBA All-Star Skills Challenge.

Check below for the highlights, as well as each sneaker worn this year from the likes of All-Stars Domantas Sabonis, Luka Doncic, and Chris Paul.

The winner of the 2021 Skills Challenge was Indiana Pacers big man Domantas Sabonis. Unlike most big men, Sabonis went with low-top guard sneakers with the Nike Kobe 6 Protro.

This looks to be a PE made to match Sabonis’ Pacers colors, although it happened to fit his All-Star jersey perfectly as well. For a similar colorway, you can check out the white/Del Sol Kobe 6 found HERE.

You can find the Nike Kobe 6 over at StockX and GOAT.

The runner-up to Sabonis was the Orlando Magic’s Nikola Vucevic, who just narrowly lost a shootout with the Pacers big man. Maybe it was due to the guard shoes this game, as Nikola opted for the Nike Kyrie 7 in the Skills Competition. His “Chinese New Year” colorway can be found HERE.

You can find the Nike Kyrie 7 at StockX and GOAT.

This is the first All-Star appearance for Julius Randle, in his second season with the New York Knicks. Eager #Knickstape fans surely want to know the kicks worn in this skills competition, which was the Nike Kobe 6 Protro “All-Star” colorway. You can find this red sneaker HERE.

You can find more Nike Kobe 6s over at StockX and GOAT.

The Dallas Mavericks’ Luka Doncic was voted in as a starter for his 2nd All-Star game, but first came the skills competition. Doncic wore the Air Jordan 35 in a green and orange PE colorway.

Much of the Phoenix Suns upstart season is due to Chris Paul, who mades his 11th All-Star Game tonight. For that and the skills competition, CP3 wore the Jordan CP3.XIII (13) in red, green and yellow.

The 13th Paul signature isn’t available at this time.

RoCo did not fare well in the Skills Competition, but the Portland Trail Blazers still represented his roots. Just by appearing, Covington showed out as the lone participant during All-Star Weekend who came from a Historically Black College or University (Covington attended Tennessee State.) HBCUs are institutions established prior to 1964 with the principal mission of educating Black Americans.

Like Randall, Robert Covington hooped in the “All-Star” Kobe 6 Protro, that you can find HERE.

You can see other colors of the Nike Kobe 6 over at StockX and GOAT.