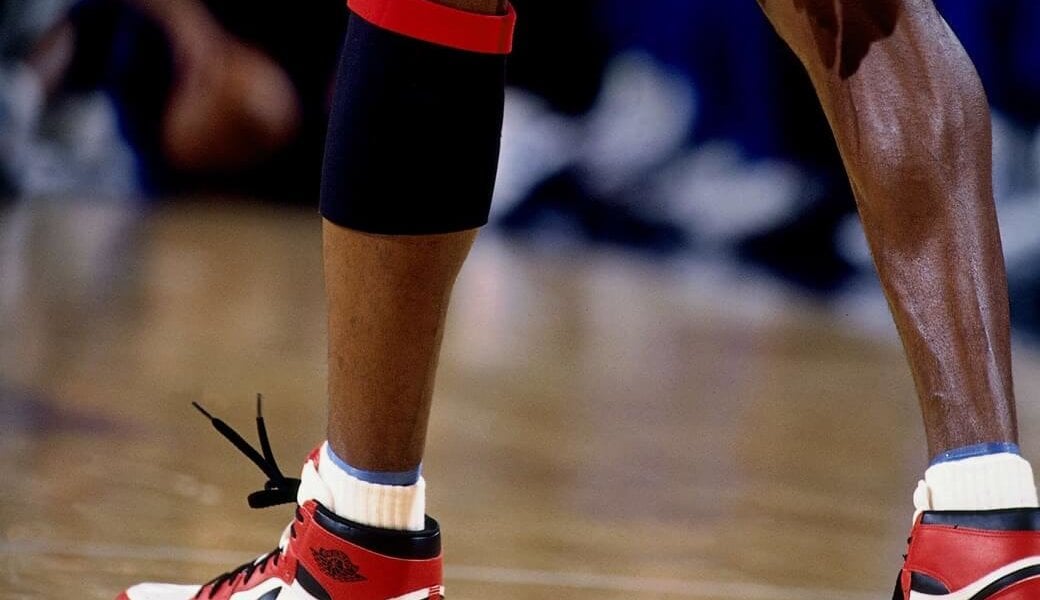 Every Sneaker Worn in The Last Dance: Episodes 5 & 6

The Last Dance takes a never-before-seen look at the last season of the Chicago Bulls dynasty. The third batch of two episodes released on May 3, and looked at the darker side of Michael Jordan’s legacy. You saw big highs with championship wins and endorsements, but also the lows of fame wearing on MJ.

Episode 5 took a look of the former though, with many of the kicks you see below based on Mike’s relationship with Nike.

Without further ado, here are all of the shoes worn in the Last Dance episodes 5 and 6.

Once again, the shoes featured prominently in the 1997-98 season was the Air Jordan 13. You can see the white and red colorway set aside Mike’s last MSG game as a Bull, in case he needed to switch out of his original Jordan 1s.

Michael can also be seen lacing up the “He Got Game” colorway near the end of episode 5.

Toward the beginning of the episode, Michael is rocking the “Playoffs” colorway for the 1998 NBA All-Star Game, as seen in the East team photo featured in the docuseries.

As a tribute to Kobe Bryant, the beginning of episode 5 took a detour from the Bulls drama in the 1998 All-Star Game. In behind-the-scenes footage, Michael could be heard saying “that little Laker boy’s gonna take everybody one-on-one.” Some high praise from one great, to a future great.

You can read more on Mike and Kobe’s All-Star duel HERE.

While the game footage wasn’t shown, Kobe’s first All-Star Game saw him rock the adidas KB 8 in Lakers centric colors. After the Black Mamba left adidas, the shoe was renamed the Crazy 8.

You can find this adidas Crazy 8 colorway at GOAT.

The most prominently featured pair of sneakers in the series is the Air Jordan 1. Aside from the Kobe nod, episode 5 showcased the rise of Michael’s mega popularity which translated into endorsements. Mike’s first endorsement was with Nike, as told by his agent David Falk. Photoshoots flashed by showing the “Black Toe” and “Bred” colorways. The latter of which revealed the wingless “Rare Air” version:

The regular “Bred” 1 also appears on feet in the Spike Lee joint She’s Gotta Have It.

A major part of episode 5 was Michael bringing back the Air Jordan 1 “Chicago” for his last game at Madison Square Garden as a Chicago Bull.

Of course the shoes were too small and his socks were soaked in blood by game’s end. You can read more on this legendary moment HERE.

You can find the Air Jordan 1 at StockX, Eastbay, GOAT, Flight Club, Stadium Goods, and DicksSportingGoods.com.

The Converse Chuck Taylor surprisingly makes it’s 2nd appearance on the Last Dance. An old ad played with kids tapping their toes in the low-top. This was in reference to Converse’s foothold on the NBA in the 80s, when they were the official sponsor of the league.

You can find the Converse Chuck Taylor All-Star Low-Top at DicksSportingGoods.com.

Speaking of Converse, the next shoe further emphasized the brand’s foothold on the NBA. A snippet of the Converse Weapon ad was shown, featuring Magic Johnson, Kevin McHale, Isiah Thomas, Bernard King, and a deadpan Larry Bird.

You can find the Converse Weapon Hi at GOAT.

Something that may shock people was the fact that Michael wanted to sign with adidas as a rookie. As David Falk said, adidas was “dysfunctional at the time” and didn’t have money to sign MJ.

This MJ admission came with shots of Mike wearing the adidas Pro Model in a UNC practice.

You can find the adidas Pro Model at adidas.com, StockX, and GOAT.

The sneaker montage in the middle of episode 5 featured the white and cement grey colorway of the Air Jordan 4, as well as the black and red.

Another Spike Lee film in Do The Right Thing was referenced, with the famous shot of Buggin’ Out getting his 4s scuffed by a bike.

You can find the Air Jordan 4 at StockX, GOAT, Flight Club, Stadium Goods, and DicksSportingGoods.com.

More “Michael taking over the world” endorsement shots include Spike Lee’s famous Air Jordan 5 ads with the above colorways.

Of course, Mike had to chime in after the endorsements montage by saying “My game did the talking.”

The “Metallic” colorway also made an appearance on Sam Smith’s The Jordan Rules book.

You can find the Air Jordan 5 at StockX, GOAT, Flight Club, and Stadium Goods.

During one of the in-season “Michael is dominating” montages, the Air Jordan 6 “Carmine” makes an appearance.

Mike was briefly seen taking a closed-eyes free throw wearing this colorway, which you can read more about HERE.

Michael can be seen wearing the “Carmine” sneaker in the Be Like Mike Gatorade commercial.

You can the Air Jordan 6 at StockX, GOAT, Flight Club, and Stadium Goods.

For most of the 1992 season, Michael was seen in the “Charcoal” Air Jordan 7, with sparse appearances from the “Cardinal” colorway. The former was worn in the 1992 NBA Finals opposite Clyde Drexler’s Portland Trail Blazers. Mike famously “shrugged” after nailing 6 three-pointers in the first half in the “Charcoal” AJ 7, which you can read more about HERE.

Due to the similar colors, sneakerheads later dubbed this shoe the “Raptors” Air Jordan 7, despite having no relation to the Toronto team.

You can find the Air Jordan 7 at StockX, GOAT, Flight Club, and Stadium Goods.

After extensive research, it appears that Clyde Drexler rocked a variation of the Avia 855 Low during his NBA Finals clash with MJ. Funny enough, Scottie Pippen had previously rocked this shoe before he signed with Nike.

One of the shots of Michael entering a stadium while in Barcelona shows him wearing the Nike Air Pegasus 92. This was the Olympics colorway, which was fitting for the Summer Games.

You can find the Nike Air Pegasus 92 “Olympics” at StockX.

A highlight of the Dream Team segment was the competitive rivalry between Magic Johnson and Michael Jordan.

In a funny moment with these two and Larry Bird in a photoshoot, you can see Johnson wearing the Converse Magic 1 in the Olympics colorway.

For a quick second in the Dream team locker room, you can see Patrick Ewing lacing up his own sneakers in the Ewing Eclipse High.

You can find this Olympic colorway at EwingAthletics.com.

None of the Dream Team members had much screen time outside of Magic, MJ, and Scottie Pippen. Number 33 (8 in Olympic play) had his beef with Jerry Krause arise once more, as Team USA faced off against Croatia. Krause apparently spent time signing Croatian star Toni Kukoc to the Bulls rather than tend to Scottie’s contract. This ticked off both Mike and Pippen. Because of the animosity, both Bulls chose to play extra hard on defense against Kukoc in Olympic play.

The sneakers of choice for Scottie was the Nike Air Flight Lite. This shoe can be found at StockX and GOAT.

The sneaker that Toni Kukoc rocked for the Olympics was the Nike Air Ballistic Force. This was a popular shoe at the time, as John Stockton also rocked the Ballistic Force on Team USA.

Knicks Guard John Starks had a cameo later in episode 6 and was also rocking this shoe during the 1993 Eastern Conference Finals against the Chicago Bulls.

Opposite the Knicks, Mike wore the “Playoff” Air Jordan 8. Despite the nickname, MJ pretty much wore this sneaker for most of the 1992-93 regular season.

The shoe is synonymous with Jordan winning his 3rd straight NBA championship with the Chicago Bulls by defeating the Phoenix Suns in game 6 of the 1993 NBA Finals.

In the losing effort, Charles Barkley rocked the Nike Air Max 93 in the NBA Finals. Chuck would later say this was the first time he felt he wasn’t the greatest player in the world after playing against Jordan in this 1993 series.

You can find the Nike Air Force Max at GOAT.

Horace Grant made a quick appearances in episode 6, as many felt he was the rat who revealed the Bulls inner workings to Sam Smith on “the Jordan Rules” book. Through the montages though, you can see Horace rocking the Air Force High 93, particularly in the playoffs against the Knicks and Suns.

Finally, we have the hero of game 6 in the 1993 NBA Finals. John Paxson hit the game-winning 3-pointer in the Reebok D Factor Low, a budget-friendly shoe in the 90s. The shot clinched Michael Jordan’s third consecutive championship.