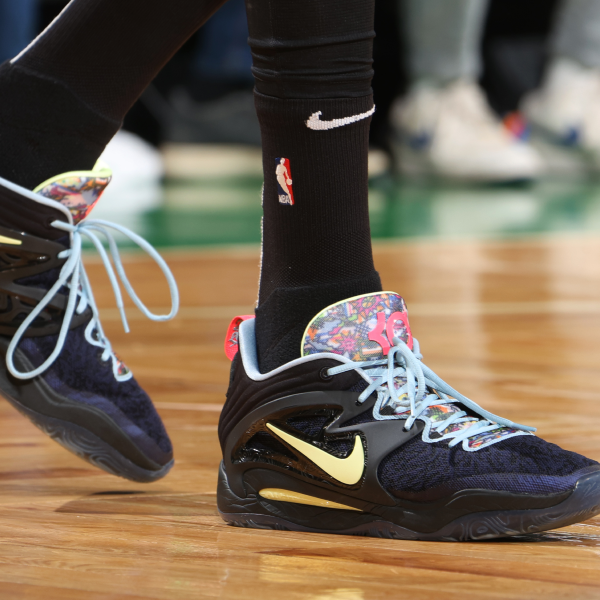 While his Brooklyn Nets loss game 1 against the Boston Celtics in heartbreaking fashion, the first round matchup also saw Kevin Durant’s 15th signature shoe on the All-Star’s feet.

This new style goes back to a low-cut feel for the first time since the KD10, for more range of motion. This is balanced by the supportive 3D molded heel counter and eye-catching midfoot cage surrounding the swoosh. The cage design was purposefully made to look like wavy water, with Kevin likening his game to the Bruce Lee quote “be like water.”

Zoom Air Strobel returns again, an underfoot bounce that has been a staple in the line since the KD12. This cushioning is visible at the midsection of the outsole, surrounded by the computer-generated traction pattern that provides grip at all angles.

Ben Nethongkome (who also designs the Kyrie line) once again crafts the KD after taking over the reins from Leo Chang on the KD14. Durant’s past sneakers have dabbled with casual sneaker elements, with the KD15 being no different. This time, there is a retro basketball feel combining elements from the Uptempo and Flight models prominant in the ’90s. The toe was inspired by the Jet Flight; a 2001 style that KD waxes nostalgia over from seeing them on his now coach’s (Steve Nash) feet.

The new sneaker is notable as it makes Durant the 2nd player ever to have 15 signature shoes release as an active player behind LeBron.

Future colorways of the KD15 will show inspiration from Durant’s love of music and art. There currently are no release dates, but expect to see them on Durant’s feet for as long as the Nets remain in the postseason.