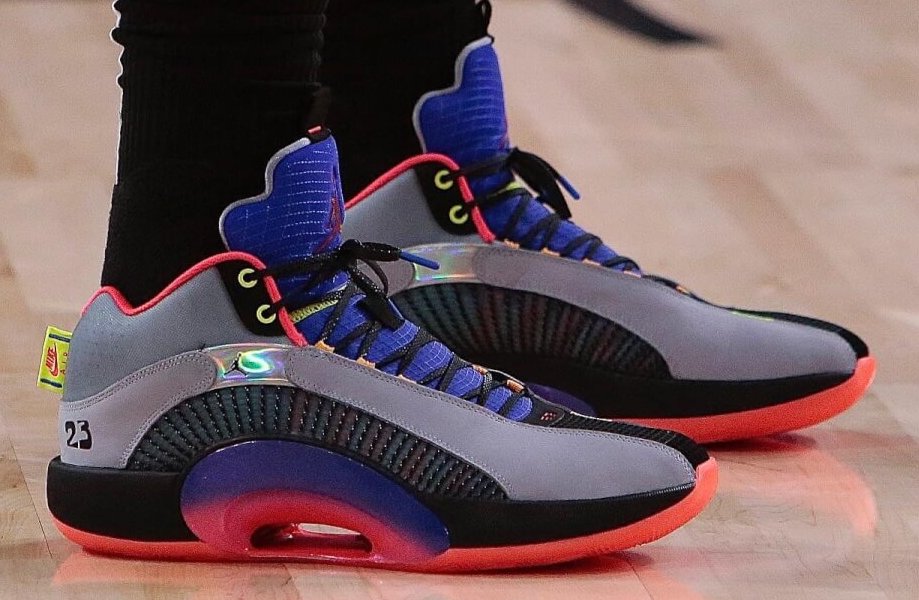 Welcome to Nightly Pro Notables: a collection of the hottest sneakers and biggest moments of the night on September 10, 2020.

On this night, we saw the Lakers take a 3-1 series lead on the Houston Rockets on the back of another big Anthony Davis performance. Additionally, we saw sneaker moments from the likes of PJ Tucker and even rookie Talen Horton-Tucker (no relation.) The recently leaked Air Jordan XXXV also graced the hardwood for the first time in both the NBA and WNBA bubble games. Check below for all of these highlights and kicks on a light day of Disney World hoops.

Anthony Davis had a tougher time with the likes of P.J. Tucker early in the Western Conference Semifinals, but was in his element tonight. A.D.’s considerable length helped grab multiple offensive boards, while finishing above shorter Rockets defenders.

The Brow dropped 29 points in the budget-friendly, black and white Nike Mamba Fury. You can find this colorway at Dick’s Sporting Goods.

The Lakers had a 23 point lead in the 4th, but had to sweat it out in the clutch. Luckily for them, LeBron found Alex Caruso in the corner for a three to finish off the comeback Rockets.

The Nike Kobe 5 Protro “Lakers/ 5x Champs” that Caruso rocked in game 4 can be found at StockX and GOAT.

With the game in hand thanks to Caruso, LeBron James punctuated the win with a alley-oop slam off the backboard. You know, normal stuff for a 17-year vet.

The King got it done in a gold, purple, and red Nike LeBron 17 seen below. This remains a player exclusive, but you can find other colorways at StockX, GOAT, and Dick’s Sporting Goods.

Both Jeff Green and Kia Nurse debuted new Air Jordan XXXV sneaker on-court today. Not much is known about the 35th signature Jordan sneaker, but it does appear to feature a heel homage to the Air Jordan 5. The eye-catching and supportive eclipse-plate carries over from the AJ34 as well.

Stay tuned to What Pros Wear for further info on the Air Jordan 35.

There isn’t release info about this colorway, but you can find other Nike Kobe 5s at StockX, GOAT, and Flight Club.

Rajon Rondo became a sneaker free agent recently after years with Anta. The Lakers guard had been rocking classic Nike styles but switched it up today with some Puma. No word on if Rondo has signed, or if teammate Kyle Kuzma hooked it up with a pair of J. Cole’s signature shoe.

The Puma RS-Dreamer “Blood, Sweat, and Tears” can be found at StockX and Foot Locker.

The Rook Catches Eyes with his Kicks

Talon Horton-Tucker doesn’t get much burn, but he made the most of the garbage time tonight rocking the Nike Kobe 7 “Prelude Pack.” You can find this colorway at StockX and GOAT.