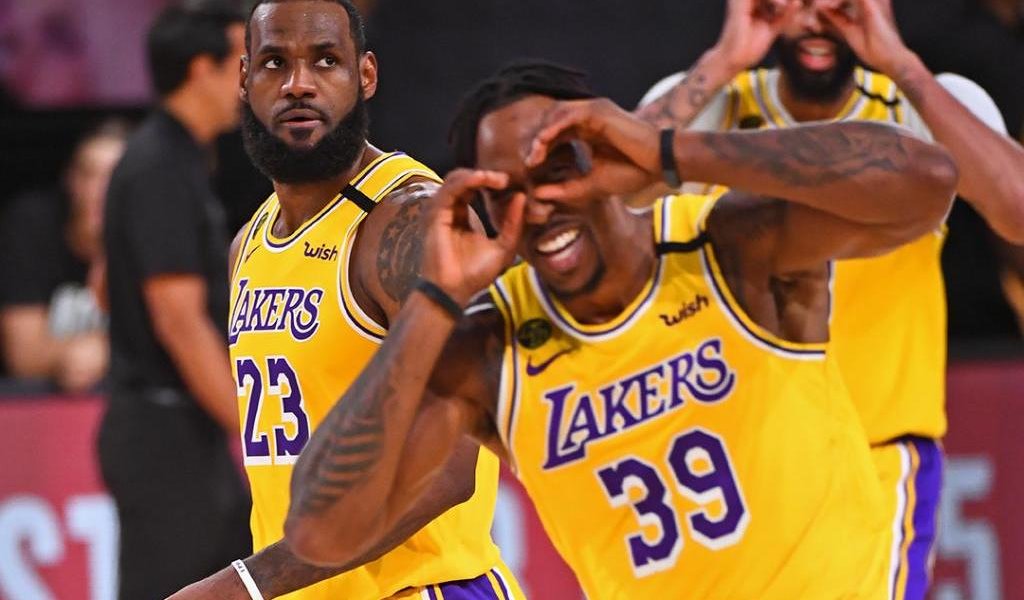 Welcome to Nightly Pro Notables: a collection of the hottest sneakers and biggest moments of the night on September 30, 2020.

It’s finally NBA Finals time after two restarts and one bubble creation in the 2019-20 season. The stars were out (virtually) for game 1, including Chicago resident Barack Obama as well as former Laker Shaquille O’Neal:

We also got some Black Mamba love from Pau Gasol in his vintage Kobe Bryant jersey:

What looked to be a competitive matchup soon saw Miami take a double digit lead into the 2nd quarter. Before you know it though, the Lakers barrage happened led by Anthony Davis. Los Angeles led by as many as 32 points as 3-pointer after 3-pointer dropped.

All this led to a big Lakers W. Along the way, we saw some flashy slams from LeBron James, as well as heat on the feet of Rajon Rondo and Bam Adebayo. We also have a sneaker revelation about Dwight Howard, which you can read below.

The extra few days of rest worked wonders for Anthony Davis, who was dealing with minor bumps at the end of the Nuggets series. A.D. brought all the energy tonight, dropping a game high 34 points in the Lake Show win.

The Brow would not be denied the W tonight, as exemplified by this play with multiple offensive rebounds:

Anthony rocked a new purple player exclusive tonight of the Nike Kobe 5 Protro, with some Purple Rain Prince vibes. This colorway isn’t available, but you can find other colors at StockX, GOAT, and Flight Club.

Bron Adds Some Spice to His Dunks

The Lakers were having fun out there, including LeBron James. Season 17 didn’t show as the King got up on a few slams with some extra flavor. While this slam came after the buzzer, ‘Bron did the most with a reverse, double-clutch dunk:

James also took a perfect Rajon Rondo dime and cashed in with a double-clutch, front-facing throwdown:

As he did in the last few games, LeBron rocked two different sneakers this game. The first quarter featured the Nike LeBron 7 he debuted on media day with mismatched purple and gold shoes:

The Nike LeBron 7 “Media Day” can be found at StockX and GOAT.

Once again in typical James fashion, he rocked another “you can’t get these” player exclusive Nike LeBron 17. You can find other colors at StockX, GOAT, and Dick’s Sporting Goods.

Herro Totally Meant to Do That

Never one to be afraid to shoot, Tyler Herro took this off balanced jumper in the corner that nicked the corner of the backboard. Somehow, someway though, the shot spun it’s way straight into a swish.

Herro played the part of magician on this play while wearing the Nike Kobe 5 “Unlucky 13”. This UNDFTD collab can be found at StockX.

You can stay tuned to StockX once the Nike Kobe 6 “Bruce Lee” releases for availability.

Add another new Kobe 5 to the list that Bam Adebayo has rocked this season. Game 1 saw him rock the DeMar DeRozan PE in grey with checkerboard and zebra print patterns.

You can find this Nike Kobe 5 Protro at StockX.

Fans may not expect Dwight Howard to be such a Kobe fan after his disappointing first run with the Lakers. The Los Angeles starting center did make up with Bryant before he passed though and he has been rocking various Kobe sneakers all season.

As it turns out, Dwight turned down a 6-figure endorsement deal from a non-swoosh company to rock Bryant’s sneakers before his dunk contest in February this year. All to continue to rock his Kobes.

The Nike Kobe 5 Protro “Lakers/ 5x Champs” that Howard rocked tonight can be found at StockX and GOAT.