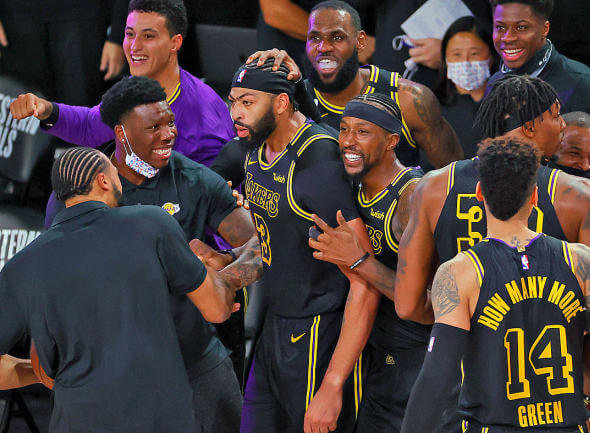 Welcome to Nightly Pro Notables: a collection of the hottest sneakers and biggest moments of the night on September 20, 2020.

The theme of the night was Kobe, with Anthony Davis channeling the Black Mamba on his epic game 2 buzzer beater that stole game 2 from the Denver Nuggets. We also saw more Kobes on the court from Alex Caruso and even Coach Vogel. Check below for all the happenings in the Western Conference Finals.

Brow with the Mamba Mentality

Anthony Davis dropped big numbers as usual, but it was his game-winner that shook up the NBA community.

A.D. put up 22 of his 31 points in the second half, with his last 3 being the wildest. Rajon Rondo was money on a perfect bounce pass out of bounds with 2.1 seconds left. The Brow channeled his inner mamba mentality on a trifecta over the outstretched arms of Nikola Jokic.

Swish. And guess what Anthony said after the buzzer sounded?

Davis rocked the Nike Kobe 5 Protro “Bruce Lee” on this game-winner. You can find this yellow and black colorway at StockX, GOAT, and Flight Club.

Despite taking the L, Nikola Jokic put up a fight dropping 12 points in the 4th during the Nuggets comeback. The much larger Jokic bullied A.D. at the rim:

The Serbian big also gave the Nuggets the first lead since the 1st with this wild tip-in off an airball:

Nikola rocked the Nike Hyperdunk X tonight, which you can find at StockX, Flight Club, and GOAT.


Bron and Craig Have a Block Party

On back-to-back plays, LeBron James and Torrey Craig had themselves a block-a-thon. The King stopped Jamal Murray with a vicious rejection of the Denver guard’s layup. The Lakers then went on a fast break that saw Craig come from outta nowhere to spike a shot off the backboard.

Bron wore the Nike LeBron 17 in a PE grey, purple, and yellow colorway. This isn’t available, but you can find other colors at StockX, GOAT, Stadium Goods, Flight Club, and DicksSportingGoods.com.

Torrey wore the grey zebra DeMar Derozan player edition Nike Kobe 5 Protro, which you can find at StockX and GOAT.

What out below; the Bald Eagle is taking flight. The Lakers bench absolutely went wild on this fast break from Alex Caruso that led to a right-handed spike dunk.

Alex wore the Nike Kobe 4 Protro x UNDFTD in black this game, which you can find at StockX and GOAT.

RR with the Nostalgia from 2004

Rajon Rondo is making the most of his sneaker free agency, bringing back a classic basketball style from 2004. The Nike Zoom Huarache 2K4 brings nostalgia for many hoopers back in the day. This black and yellow colorway is reminiscent of Kobe Bryant, who rocked the 2K4 as his first shoe after signing with Nike (from adidas.)

You can find this black and yellow colorway at StockX and GOAT.

Finally, we have Coach Frank Vogel getting in his own mamba mentality.

The Nike Kobe 5 Protro “Lakers/ 5x Champs” that coach rocked in game 2 can be found at StockX and GOAT.