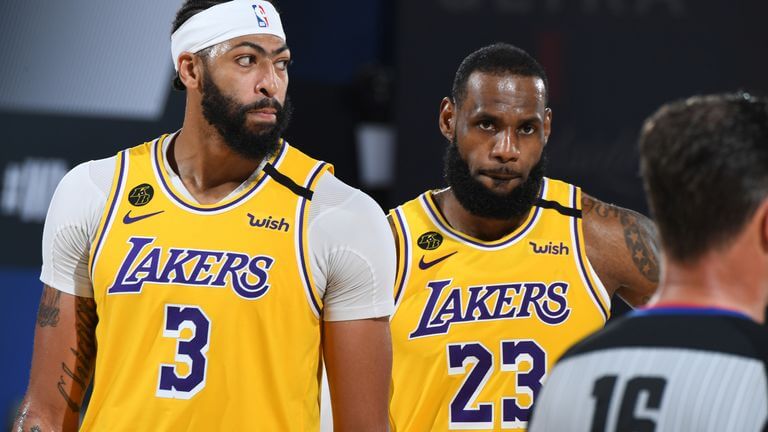 Welcome to Nightly Pro Notables: a collection of the hottest sneakers and biggest moments of the night on September 24, 2020.

As always, LeBron James and Anthony Davis paced the Lakers, with the former playing defense down the stretch against the Nuggets stars. Davis was on a tear offensively, as you can see below. Keep scrolling to find exclusive Kobe colorways as well as a sighting of J. Cole’s new Super Mario 64 sneakers in another playoff game in the Orlando bubble.

Anthony Davis paced the Lakers from the start with a blistering performance in the first half. The Brow started the game a perfect 7-7 after not having the best game 3. A.D. dominated with his deliberate face-up game, driving past any Nuggets defender coach Mike Malone threw at him.

Davis was so in the zone that not even a poked eye could stop him from getting buckets:

Anthony Davis rocked a PE white, purple and gold Nike Kobe 5 Protro in this game. While not available, you can find other colors at StockX, GOAT, and Flight Club.

Putting the Team on Her Shoulders

Over on the Wubble we saw a legendary performance from Alyssa Thomas. The Connecticut Sun Forward dislocated her shoulder just 36 hours prior to tonight’s game against the Las Vegas Aces. Thomas had her shoulder popped back in then subsequently dropped 23 points and 12 rebounds. This includes 9 points in the last three minutes to give her squad a 2-1 semifinals advantage.

Alyssa wore the turquoise Spurs based UNDFTD x Nike Kobe 4 Protro in this gutsy performance which you can find at StockX.

The wildest highlight in game 4 came from the red hot Jamal Murray. In a career moment, Murray went up for a layup on LeBron James, then double-clutched underneath the King’s outstretched arms, harkening to Michael Jordan’s hand-switch layup.

Murray was a walking bucket this game, including this bonus floating shot over tough defense from Rajon Rondo.

Dwight Gets Up, the Lakers Bench Gets Hyped

The Dwight Howard of old made a return on this play, following a LeBron James missed jumper with the foul. J.R. Smith was amused, with the ripping suit Superman motion on the bench.

Dwight’s impressive slam featured the Nike Kobe 10 Elite “Elevate”, which you can find at StockX and GOAT.

It was a busy sneaker day for LeBron James, as he debuted the Nike LeBron 18 in warm-ups. This reflections colorway can be found at StockX and GOAT.

During the game, the King reverted to two of his past PE colorways: a purple and gold base on the left foot and white and purple upper for the right foot. Both colors haven’t released, but you can find other LeBron 17s at StockX, GOAT, Stadium Goods, Flight Club, and Dick’s Sporting Goods.

Torrey Craig may not get much love from casual NBA fans but he sure seems to get it from Nike. The Denver wing rocked an exclusive white and red Nike Kobe 5 Protro this game. You can find other colors at StockX,GOAT, and Flight Club.

The red and blue Super Mario colorway he rocked for game 4 of the Western Conference Finals can be found at StockX and GOAT.