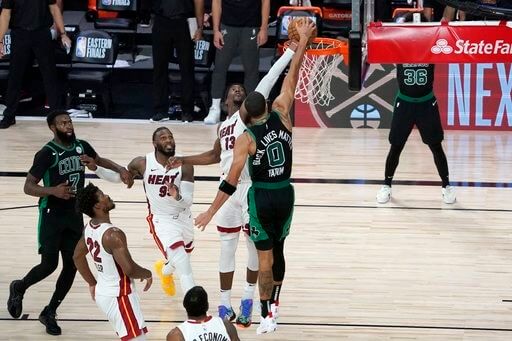 Welcome to Nightly Pro Notables: a collection of the hottest sneakers and biggest moments of the night on September 15, 2020.

And what a night of bubble basketball it was. We saw one of the more competitive overtime playoff games between the Celtics and Heat that saw one of the wildest blocks in playoff history. The following game was less competitive with an eventual blowout win by the Nuggets, completing their second 3-1 comeback series win, on Coach Michael Malone’s birthday no less. Check below for all the highlights and sneakers on a wild night at Disney World.

An All-Time Clutch Block from Bam

In the pantheon of great blocks in NBA history, Bam Adebayo’s might rank ahead them all. Boston was down two in overtime with the shot clock off and Jayson Tatum looked to have a ferocious dunk to tie it. Bam was unafraid though, even jumping much later than Tatum for the block. Adebayo’s wrist and hand bent back as much as possible, but he got the game-winning rejection over the Boston star.

Bam’s greatest career highlight came in the Nike Kobe 5 Protro “EYBL”, which you can find at StockX.

Like his nickname suggests, Jimmy Butler got buckets on the clutch for the Miami Heat. He first put the Heat up 1 with this pump-fake three pointer with 26 seconds remaining:

After the game went into OT, Jimmy got the go-ahead buck and free throw that led to the Bam block:

As a sneaker free agent, Jimmy Butler rocked the older Air Jordan 31 for this game. This black, white and red colorway isn’t available, but you can find other colors at StockX and GOAT.

Jamal Breaks Past 2nd Round

The high-point man in the late game was Jamal Murray, whose 40 points was more than Paul George and Kawhi Leonard combined (24.) Murray paced his Nuggets squad early with tough floaters in the lane. Eventually Denver came back from 12 down in the 2nd half (like they did in the past few Clippers games).

Jamal absolutely sank the dagger into Los Angeles with this tough three that put Denver up 18 with two minutes left:

Joker Gets the Last Laugh

After game 6, Nikola Jokic said he was just having fun out there and the pressure wasn’t on his squad. That seemed to be the case watching game 7, in spite of the double teams he faced. The Joker took the tougher defense in stride, throwing dimes out there on his way to a triple double that was achieved before the 4th quarter even started.

Andre Iguodala may not be contributing like he did in his Warriors days, but his shoe game remains on point. Iggy rocked a white and red Nike Kobe 5 Protro in Miami’s win, which hasn’t released. You can find other colors at StockX, GOAT, and Flight Club.

Sadly, this is the last of Kawhi Leonard’s sneakers we’ll see this season. The Klaw no doubt had other flavors prepped for his New Balance The KAWHI sneaker collab with Jolly Ranchers. He rocked a blue raspberry colorway, which surely will release later in the year.