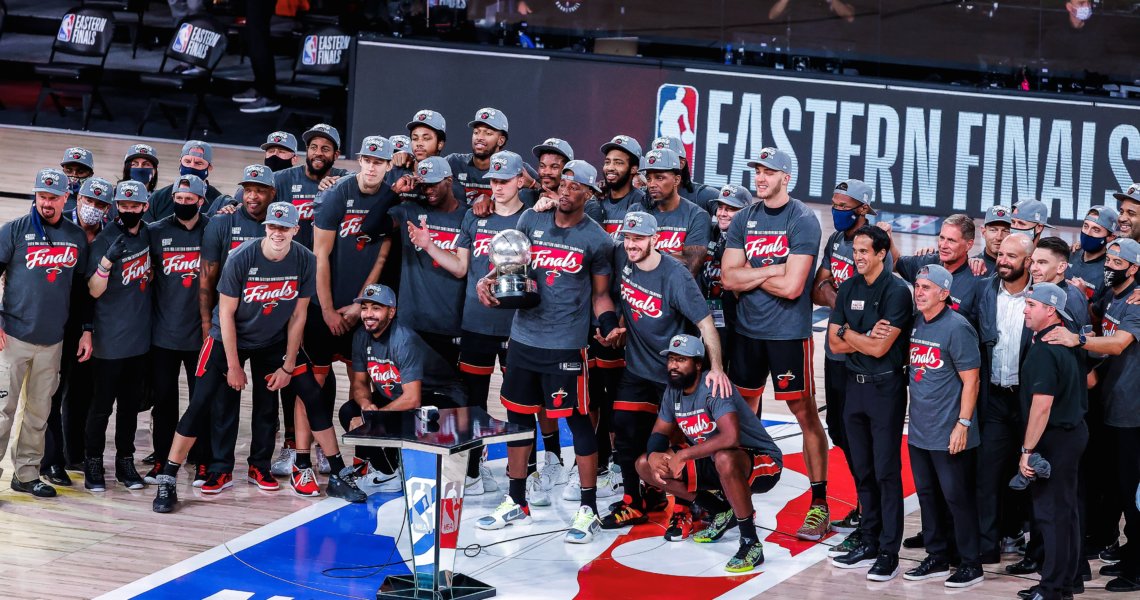 Welcome to Nightly Pro Notables: a collection of the hottest sneakers and biggest moments of the night on September 27, 2020.

The NBA Finals have been set after a game 6 W from the Miami Heat. The Celtics kept the score close and even led until a scoring binge from the likes of Bam Adebayo and Tyler Herro. You can watch their trophy ceremony below with quotes from Bam and Jimmy Butler:

The Eastern Conference Finals Miami Heat gear in that clip can be found at the NBA Store HERE.

It’ll be an interesting NBA Finals matchup, as LeBron James faces his former team in which he has won two championships with.

Continue scrolling to find the kicks worn in this closeout game 6 in the Eastern Conference Finals.

It’s a testament to the Miami Heat’s depth that they’ve had so many different leading scorers in the bubble. Game 6 featured a crazy efficient night for Bam Adebayo, who couldn’t be stopped when rolling to the rim.

Bam even posterized Daniel Theis on this drive to the rim:

The cherry on top of the big win came with under a minute left, with Adebayo finishing an emphatic reverse slam:

The Miami Heat big man finished with a game-high 32 points and 14 rebounds, all while rocking the Nike Kobe 5 Protro PJ Tucker PE. You can find this colorway at StockX and GOAT.

Iggy is in NBA Finals Form

While Andre Iguodala hasn’t looked like his prime self in the bubble, the 36-year old sniffed an NBA Finals trip on the line and balled out. The 3-time champ literally did not miss, going 5/5 from the field and 4/4 from three-point land:

The win meant that the former Golden State Warrior would appear in his 6th straight NBA Finals.

Iggy got it done tonight in a PE Nike Kobe 5 Protro in red and white. This colorway isn’t available, but you can find other colors at StockX, GOAT, and Flight Club.

Butler’s head and shoulder shakes absolutely froze the Celtics defender in his boots on this play before diving to the rim on an and-1 layup.

Butler got buckets in the Jordan Jumpman Diamond, which can be found at StockX.


Herro Puts on the Cape in the 4th

When they needed swishes most, Tyler Herro answered the call. The 20-year old first got back-to-back buckets with the Heat down in the middle of the 4th:

The “Baby GOAT” then helped separate the Heat, extending their lead with a layup he made look way too easy:

Herro dropped 19 points off the bench in the UNDFTD x Nike Kobe 5 Protro “Unlucky 13”, which you can find at StockX.

Pour One Out For Brown and Tatum’s Bubble Run 🍺

Despite taking the L, the Boston Celtics still had a great run in Disney World. The C’s were led throughout by Jaylen Brown and Jayson Tatum, who both scored 20+ this game.

Jaylen notably had a sweet steal and fast break bucket that gave Boston a lead late in the 4th:

Beside Brown was Jayson Tatum, whose pilfer and dunk in the first half was a thing of beauty:

Tatum rocked the “Zoo” Air Jordan 34 that was inspired by his son Deuce’s love of visiting the zoo. You can find this wild colorway at StockX.