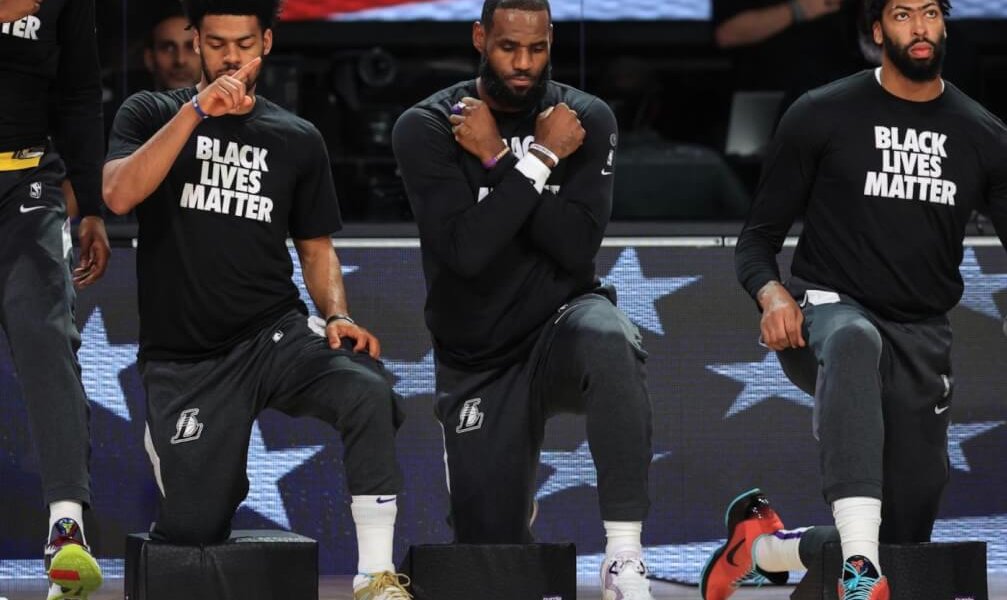 Welcome to Nightly Pro Notables: a collection of the hottest sneakers and biggest moments of the night on August 29, 2020.

The league took a two-day hiatus to figure out ways to utilize their platform for change in the wake of the Jacob Blake shooting. On Saturday, multiple game 5s were played with elimination games for the Magic and Trail Blazers. Spoilers on the later: LeBron and A.D. went to work and crushed the undermanned Portland squad.

In related news, Playoff Melo got buckets in what may be his last game as a Blazer. Giannis also did Giannis things, while Russ returned to the court in bright blue kicks. Without further ado, here are the best highlights and sneakers from Orlando.

LeBron James turned back the clock with a massive 36 point triple double.

James wore a Nike LeBron 7 PE in Lakers colors, but you can find other versions at StockX, Flight Club, and Stadium Goods.

Game 5 saw another incredible game from Anthony Davis. The Brow scored a team-high 43 points in the elimination game, dunking all over the Blazers defense.

Davis wore an orange PE in this game, but you can find the Nike Kobe 5 Protro at StockX, GOAT, and Flight Club.

Carmelo Anthony was in his bag today with a 27-point outing for Portland. On this play, Melo ran the court on Anthony Davis before stopping on a dime. A.D. kept moving, which gave Anthony all the room to pull up for his patented mid-range jumper.

The Air Jordan 34 he rocked this game isn’t available, but you can find other colors at StockX and DicksSportingGoods.com.

Another Blazers highlight was this Jusuf Nurkic rejection. LeBron made a beautiful no look pass to Javale McGee who thought he had an easy slam. Nurk said nuh-uh though, blocking the shot and corralling the rebound in one swoop.

Jusuf wore the new Nike LeBron Soldier 14 tonight, which can be found at StockX and GOAT.

Giannis Antetokounmpo was back to doing freakish things today, with this stretch Armstrong dunk that he made look way too easy.

Antetokounmpo’s dunk came while wearing the “White Cement” Nike Zoom Freak 2, which hasn’t released yet. You can find other colors at StockX and Dick’s Sporting Goods.

After being sidelined with a quad injury for the first four playoff games, Russell Westbrook returned to play his former OKC team with a minutes restriction. Possibly as an ode to his former team, the Brodie donned a blue Jordan Why Not Zer0.3 this game, which isn’t currently available. You can find other colorways at StockX, GOAT, Flight Club and Dicks Sporting Goods.

Shai Gilgeous-Alexander rocked a new(ish) sneaker for game 5 against the Houston Rockets. This time around was a white and pink Converse All-Star BB Evo, which is lower, lighter, and more responsive than the BB Pro.

This colorway isn’t available, but you can find other Converse All-Star BB Evos at StockX and GOAT.