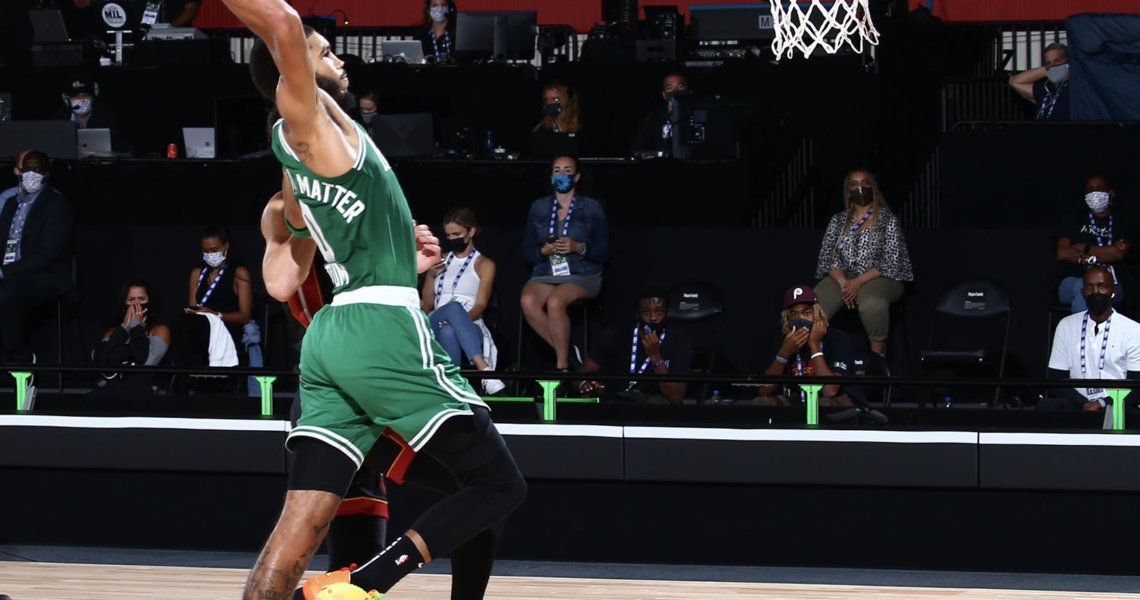 Welcome to Nightly Pro Notables: a collection of the hottest sneakers and biggest moments of the night on September 19, 2020.

On this night in the Orlando bubble, the Celtics were paced by four players with 20+ points to help finally beat the Miami Heat. The energy and pace saw an uptick with Gordon Hayward returning from a 5 week injury, although the scoring was held down by Jaylen Brown and Jayson Tatum.

Check below for all the Celtics highlights, as well as the sneakers they wore tonight at Disney World.

The Celtics were led by Jayson Tatum in the stat column. In addition to swishing threes, Tatum threw 8 dimes as well as 14 boards and 25 points.

Tatum rocked a “Taco Jay” PE of the Air Jordan 34 in this game, which isn’t available. You can find other colors at StockX and DicksSportingGoods.com.

Brown Dominates on Both Ends

Not to be outdone, Jaylen Brown put up numbers as well dropping a game-high 26 points to go with 3 timely steals that led to fast break points.

Despite only have 6 points in the game, Gordon Hayward (and his mustache) returned to the lineup for the first time in 5 weeks. Hayward’s presence was needed after the Celtics got down 0-2 in the series. Case in point was this Gordon steal and on-point half-court pass leadin g to Tatum’s slam:

Gordon Hayward wore his signature Anta GH1 in his return, which you can find at Anktshop.com.

The third 20 point scorer for Boston tonight was Marcus Smart. 2 of his more impressive points came on this reverse layup, that was cooked up after shaking Jay Crowder’s ankles:

Smart also shared the rock with this beautiful side-arm assist to Brown:

The white, orange and pink Puma Clyde Hardwood Retro Fantasy worn in this game can be found at StockX and GOAT.

One of the more exciting developments for Miami this season was the development of rookie Tyler Herro. The young guard has not been afraid of the big shot, as shown in this tough fadeaway jumper with Smart in his grill:

You can find the “Unlucky 13” Nike Kobe 5 Protro that Herro wore this game at StockX.