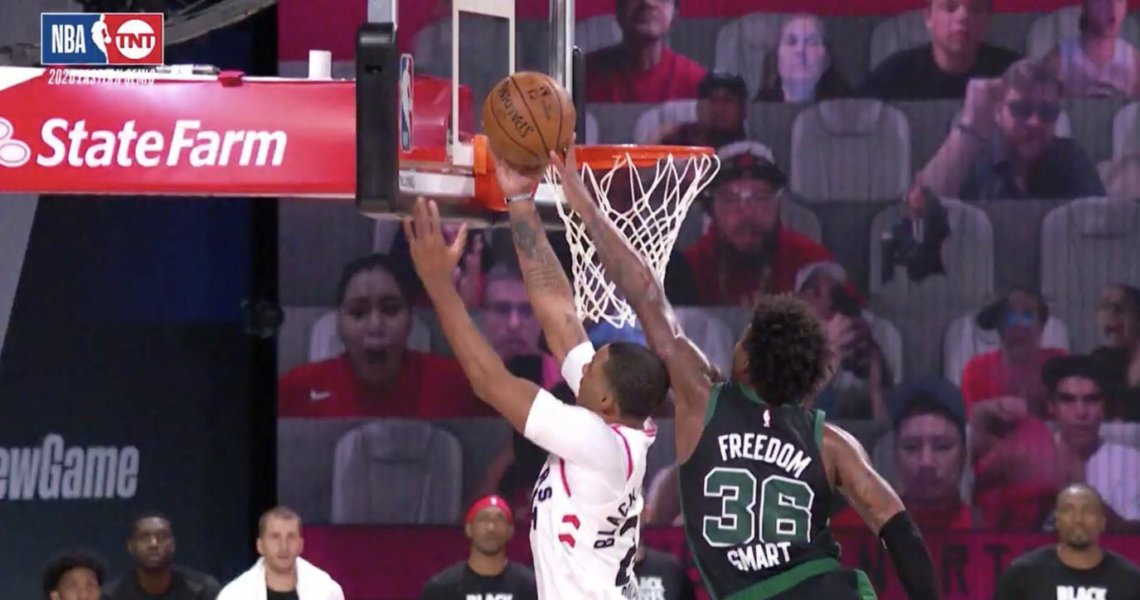 Welcome to Nightly Pro Notables: a collection of the hottest sneakers and biggest moments of the night on September 11, 2020.

The night saw an improbably comeback from the Denver Nuggets to stave off elimination, with some clutch plays from the maligned Michael Porter Jr. In the late game 7, Marcus Smart came up big amongst his Celtics team with a late game block that helped Boston advance to the Eastern Conference Finals. Check below for these moments, and other highlights on an exciting night of Disney World bubble hoops.

Jayson Tatum faced a formidable Toronto Raptors defense in a pivotal game 7 and still came up big in the scoring department.

Tatum sank jumpers and drove at will to become the high-point man on the night. Of course, the points don’t matter for the (literal) win or go home game, and you can see the joy when the buzzer sounded with the Celtics on top.

Tatum became the first player with 25+ PTS, 10+ REB & 5+ AST in a Game 7 since Kobe Bryant. Jayson finished with 29 points, 12 rebounds, and 7 assists and cherished the mamba comparisons:

Tatum’s signature game came in the Air Jordan 34 in purple and pink. This “Taco Time” colorway is exclusive to Jayson, but you can find other colors at StockX and DicksSportingGoods.com﻿

Things weren’t looking good for the Denver Nuggets in game 5. Facing elimination and a 16-point deficit, the team stormed all the way back on the back of Paul Millsap. Overall the Nuggets were paced by a comeback performance from Jamal Murray, who led the team with 26 points.

Marcus with the Play of the Game

Tatum may’ve paced Boston to the win but the biggest Celtics play belonged to Marcus Smart. With just over a minute left in the game and the C’s clinging to a two-point lead, Norman Powell challenged to tie the game on a fast break.

Powell got all the way to the cup, looking to get the bucket but Smart timed the layup perfectly, blocking the shot off the backboard.

The white, orange and pink Puma Clyde Hardwood Retro Fantasy can be found at StockX and GOAT.

Much has been said about Michael Porter Jr’s comments after the Nuggets game 4 loss, imploring his teammates to share the ball. MPJ didn’t seem to break through to his team, only scoring 4 points leading into the fourth quarter. Even with that, MPJ hit a dagger 3-pointer with no hesitation that put Denver up for good.

With the Nugs up 5, Porter Jr. even came up clutch on defense with a massive block against Ivica Zubac at the rim.

The same colorway that Smart rocked of thePuma Clyde Hardwood Retro Fantasy can be found at StockX and GOAT.

Jokes on the Clippers

The man who broke through the Clippers 16-point second half lead was none other than Nikola Jokic. The Serbian big man confidently stepped into a 3-pointer that gave the Nuggets their first lead with 7 minutes left in the fourth quarter.

Klaw to the Rim

Much of the big lead the Clippers had was in part due to Kawhi Leonard. The Klaw was attacking with rim with impunity, even posterizing Paul Millsap on this slam dunk.

Leonard’s all-white New Balance The KAWHI sneaker isn’t available at this time. His signature shoe will release later in the fall.

Finally, we have to pour one out for Kyle Lowry, who balled out in this Raptors vs. Celtics series. Lowry went out somewhat symbolically in Golden State Warriors colored shoes, the team Kyle vanquished last year for the championship.

The adidas Harden Vol. 4 Su Casa “Warriors” can be found at StockX.