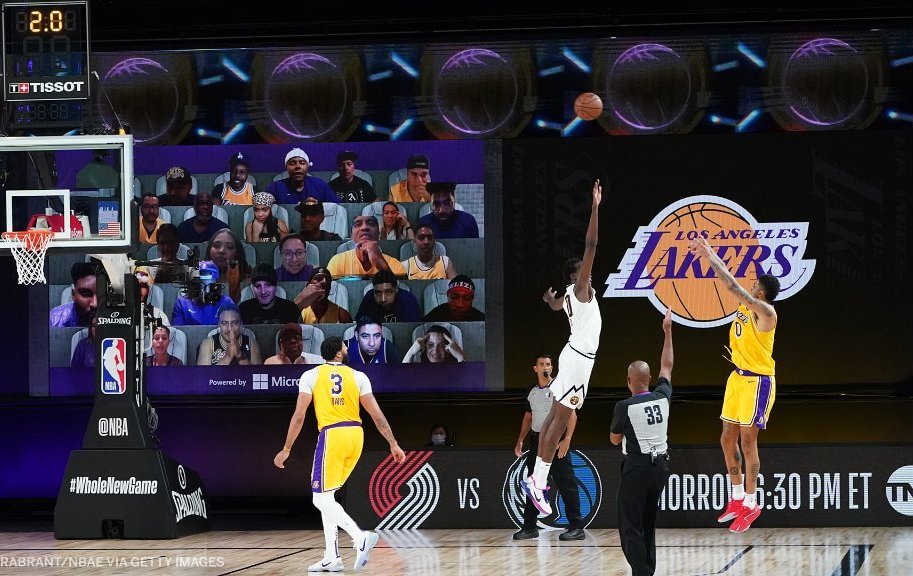 Welcome to Nightly Pro Notables: a collection of the hottest sneakers and biggest moments of the night on August 10, 2020.

On this night, Lakers highlights were abound as Kyle Kuzma made a clutch shot for the W. Anthony Davis contributed by immortalizing a few Denver players on highlights. Footwear notables also include Kuzma amongst other Lakers who debuted J. Cole’s latest Puma sneaker.

Check below for all the notables on another day of bubble basketball.

If only bubble games counted this season, Devin Booker might just be the league MVP. D Book notched another 30+ point game and even made ridiculous shots like this loooong three-pointer:

Giving Logo Lillard a run for his money.

The blue and orange Nike Kobe 5 Protro isn’t currently available, but you can find that style at StockX,GOAT, and Flight Club.

The talented Chris Boucher doesn’t get much run on the defending champion Toronto Raptors with Marc Gasol and Serge Ibaka logging most of the big man minutes.

Both the Raptors and Milwaukee Bucks decided to rest players late in the game though which allowed Chris to shine with a career-high 25 points along with 11 boards.

You can find the red/black Nike KD 12 he wore this game at StockX and Dick’s Sporting Goods.

While Kyle Kuzma has often been the scapegoat for any loss for the Lakers this season, he was directly involved in the W tonight against the Denver Nuggets. Not only did he tally 25 points on the night, but he hit the game-winning three with 0.4 seconds remaining.

If you were wondering about Kuzma’s sneakers for this epic shot, scroll down to the Pro Sneakers section for his Pumas.

The tallest player on the court had the best-court vision on this play. The 7’2″ Bol Bol corralled on this play and immediately threw a full-court pass to Nuggets teammate Mason Plumlee for the two-handed slam.

The white, pink, and purple Kobe 5 Protros he wore this game aren’t available, but you can find other colorways at StockX, GOAT, and Flight Club.

Double Poster Night for The Brow

Anthony Davis put up not one, but two poster dunk highlights today against the Nuggets. The first slam was via air mail from a driving Kyle Kuzma.

The lob pass could’ve been put anywhere and Davis’ long arms would grabbed it. Mason Plumlee attempted to recover for the block but just ended up on the wrong end of the posterization.

Somehow the second dunk was even more spectacular.

A.D. rebounded off the Kuzma miss with seconds ticking and some how pinned the ball to the top of the square on the backboard. Both Denver’s Nikola Jokic and Michael Porter Jr. contested (and possibly fouled) Anthony but the Brow still finished, getting two men on the poster.

His white and purple Kobe 5 Protro PEs aren’t currently available, but you can find other KB5s atStockX, GOAT, and Flight Club.

Cole World in the Bubble

This includes Skylar Diggins-Smith of the WNBA’s Phoenix Mercury:

You can find the Puma RS Dreamer at StockX.