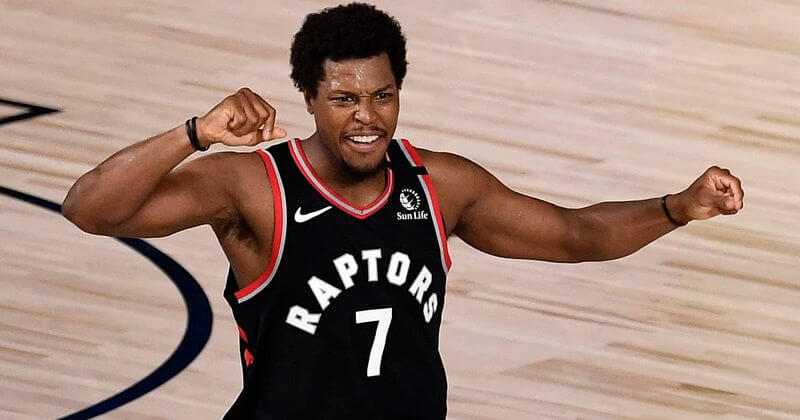 Welcome to Nightly Pro Notables: a collection of the hottest sneakers and biggest moments of the night on September 9, 2020.

On this night we saw the best game of the Orlando bubble with the double overtime thriller between the defending champion Raptors and the upstart Celtics. Highlights galore happened in the clutch, with Kyle Lowry emerging from the overtimes with some of the biggest shots. Boston kept the pressure up though, with plays from Jayson Tatum and Jaylen Brown almost eliminating Toronto.

Check below for all the highlights, as well as an early look at Montrezl Harrell’s Minion sneakers.

Facing elimination, Kyle Lowry came up BIG for the Raptors with game-high 33 points. In addition to the endless hustle, Lowry hit his most clutch shot 53 minutes into the 2OT game, fading away on a post-up for the four-point lead.

Kyle wore the “Phoenix Suns” adidas Harden Vol. 4 Su Casa in purple and orange in this contest. You can find this available at StockX.

The high-point man in the 2nd game of the night was none other than the reigning NBA Finals MVP Kawhi Leonard. His 30 points helped the Clippers take a commanding 3-1 lead over the Denver Nuggets, but it was this flashy assist that impressed on the night:

The New Balance The KAWHI sneaker isn’t currently available, but will release later in the fall.

Before Lowry’s clutch shot was this three-point play from Norman Powell that helped Toronto pull away. Powell first got the steal, pickpocketing Jayson Tatum. He then braced a fast break bump from Marcus Smart, with his falling layup hanging on the rim for an eternity before dropping in.

The white Nike Kobe 4 Protro “Del Sol” that Norman rocked this game can be found at StockX and GOAT.

Its appropriate that Fred VanVleet is signed with AND1, as he pulled off a signature street ball move tonight against the Celtics. Fred stumbled off a screen and fell to his knee. The Raptors guard kept his dribble though and fluidly got back up, spamming the crossover stick on his way to a difficult reverse layup.

The black and gum AND1 Attack 2.0 that VanVleet wore isn’t currently available.

The Celtics may have taken the L but Jayson Tatum didn’t go down without landing a few blows. His prettiest play was this crazy snatch-back dribble that froze Marc Gasol. The Boston wing immediately stopped on a dime, before throwing a perfect pass to Daniel Theis for the slam.

Tatum laced up the Air Jordan 34 that resembled Jayson’s favorite food: tacos with lots of cheese. This orange, yellow and green colorway is exclusive to Tatum, but you can find other colors at StockX and DicksSportingGoods.com﻿

Move Through London with the Euro-Step

One of the smoothest euro-steps you’ll see happened tonight via Jaylen Brown. The change of direction stopped Lowry in his tracks, leading to the easiest leftie layup from Brown.

Montrezl Harrell debuted yet another Reebok colorway tonight, rocking the Minions x Reebok Question based on Gru’s steely lab. This silver Despicable Me collab is expected to release at Reebok retailers next month.