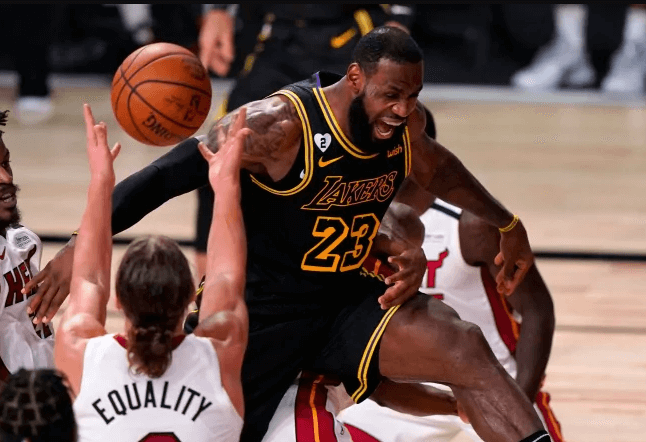 Welcome to Nightly Pro Notables: a collection of the hottest sneakers and biggest moments of the night on October 2, 2020.

Today we had a double dose of Finals basketball with the NBA and WNBA going back to back for your hoops fix. Game 2 in the NBA bubble saw the Lakers lead throughout against a short-handed Miami Heat squad. Star-power won out with LeBron James and Anthony Davis scoring more than half of L.A.’s points.

On the Wubble side, we saw a fan-favorite matchup with the Las Vegas Aces taking the L against the Seattle Storm. Similar to the NBA game, the WNBA Finals game 1 saw star power win out with Breanna Stewart leading all scorers (including the NBA game). Sue Bird also broke records while breaking necks in another pair of PE Kyries.

Continue reading to see all the sneakers and moments in both games, with lots of love for Kobe sneakers throughout.

Anthony Davis hardly missed tonight, going 15-20 from the field. At one point in the 3rd, A.D. hit shot after shot and only missed one shot up to that point.

The Brow has been aggressive through both NBA Finals games, absolutely abusing the Heat with his length and size:

The damage for Davis: 32 points and 14 rebounds, with a head start on NBA Finals MVP on the horizon.

Anthony wore a new Nike Kobe 5 Protro in yellow and black. This colorway isn’t currently available, but you can find other options at StockX, GOAT, and Flight Club.

King Continues to Show Out for Mamba

Aside Davis was the leading scorer in game 2, with LeBron James’ 33 points and 9 assists helping mightily in the Los Angeles Laker win.

The King eviscerated the Miami Heat zone defense that had dominated the NBA bubble. When he wasn’t dropping quick dimes, he was punishing his Finals nemesis Andre Iguodala on powerful drives like this one:

The Lakers notably got another W while wearing the city edition Black Mamba jerseys, with L.A. being undefeated in the uniforms. As you’ll see later in the post, there was plenty of love for Kobe via the footwear worn.

Speaking of sneakers, King James rocked multiple shoes once again this game. He laced up a black and purple player exclusive Nike LeBron 17 during warm-ups:

LeBron later rocked a black, red, and gold PE that resembles the “Courage” colorway that released, that you can find HERE. You can find other LeBron 17s at StockX, GOAT, and Dick’s Sporting Goods.

Year 17 never looked so good for Sue Bird, as her Storm team won yet another WNBA Finals game. This wasn’t any old game though, as Sue set a Finals record for assists.

Bird broke the NBA Finals record through 3 quarters alone with 12 dimes, finishing with a record 16 assists.

The sneakers on Sue’s feet was the Nike Kyrie 6 in a yellow and glow in the dark heel cup. This colorway looks to be exclusive to Bird, but you can find other colors at StockX, GOAT, Flight Club, and DicksSportingGoods.com.

Stewie Returns with a Vengeance

Coming back from an achilles injury is tough for any player, let alone the 2018 WNBA MVP. Breanna Stewart has worked her way back to top player form though with a whopping 37 points and 15 boards tonight.

Stewie dropped buckets in the Nike Zoom BB NXT in black and red. This colorway isn’t avaialble, but you can find other colors at StockX and GOAT.

Hyped Dwight is a Fun Sight

Dwight was back to his dunking ways tonight, first off this lob from Danny Green:

Howard also put a little extra oomph off this LeBron dime, charging himself up after the and-1 dunk:

The Nike Kobe 5 Protro “Lakers/ 5x Champs” that Howard rocked tonight can be found at StockX and GOAT.

Nunn of that in Kendrick’s House

Despite missing Goran Dragic, Kendrick Nunn’s comeback has been a pleasant sight for the Heat. His athleticism was on full display on this blindside block over Anthony Davis.

Kendrick wore the white and black Puma Clyde Hardwood, which you can find at Dick’s Sporting Goods.

Rajon Rondo has mostly rocked Nike and Puma sneakers during his sneaker free agency. Much like his 3-point shot though, tonight’s footwear of choice had a vector logo on it. Rondo wore the Reebok Question Low in purple and gold. This shoe notably was worn way back by Kobe Bryant in his own sneaker free agency after leaving adidas.

This specific colorway isn’t available, but you can find the mid-top version in Lakers colors at StockX.

Finally, we have even more Kobes tonight between both Finals games.

Jewell Loyd got buckets for the Seattle Storm in the Nike Kobe 5 “Bruce Lee” which you can find at StockX, GOAT, and Flight Club.

On the men’s side, we saw Meyers Leonard get the start tonight in the Nike Kobe 5 “EYBL”, which you can find at StockX and GOAT.