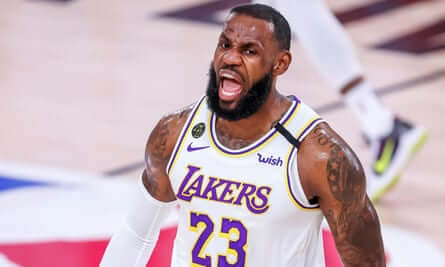 Welcome to Nightly Pro Notables: a collection of the hottest sneakers and biggest moments of the night on September 12, 2020.

Tonight we had an absolutely beatdown from the Los Angeles Lakers, who were clearly motivated to eliminate the Rockets. The LakeShow led the whole way on the back of LeBron James, leading to their first Western Conference Finals birth since 2010. This happens to be the last Lakers championship year as well.

On the sneaker side, we also saw the latest from Russell Westbrook and PJ Tucker, with the former rocking his own Converse sneaker to release soon. This and many more highlights and footwear on another night of Disney World bubble basketball.

Locked In King Shows No Mercy

From the jump of game 5, LeBron James was locked in to ensure his Lakers squad made it to the Western Conference Finals. This includes an early drive with reckless abandon to the rim that led to this powerful slam:

The Lakers would never relinquish their quick double-digit lead and rolled past the Rockets.

King James rocked the Nike LeBron 7 “All-Star” for this close-out win. You can find this classic colorway at StockX, GOAT, and Flight Club.

James Harden faced an uphill battle all night, and he thought he was safe for an easy layup after nudging Kyle Kuzma out of the way. From outta nowhere came the Internet’s favorite Alex Caruso.

The Lakers guard blocked Harden’s shot emphatically off the glass with enough force to still drift out of bounds.

The Nike Kobe 5 Protro “Lakers/ 5x Champs” that Caruso rocked in game 4 can be found at StockX and GOAT.

A.D. Post-Ups are a Bad Time for Defenders

The undersized PJ Tucker didn’t stand a chance on this Anthony Davis post-up. As if toying with his food, A.D. drove with between-the-legs dribbles before establishing post position near the paint. The Brow faked left before spinning on his pivot foot to jump over the extended reach of Tucker for an easy two.

The “EYBL” Nike Kobe 5 Protro that Davis wore this game can be found at StockX and GOAT.

Russell Westbrook may not have had the best night on the court (see his beef with Rajon Rondo’s brother), but his off-court sneakers were on-point. The Brodie wore his very own “Why Not” Converse Chuck 70 collab for post-game interviews. This features premium cracked leather and studs to showcase Russ’ love of rock-and-roll style jackets:

For warm-ups, Houston teammate PJ Tucker rocked the other shoe in the upcoming “Why Not” pack in the Air Jordan 16. This features satin accents with premium black leather.

These two sneakers will release as a packaged deal on the SNKRS App on October 2nd.

Of course, PJ Tucker doesn’t just wear one pair in a game. The Sneaker King rocked the XVI during warm-ups but switched to the upcoming Air Jordan 35 for game-time.

There isn’t release news a this time for the Air Jordan XXXV.

Noted sneaker free agent Rajon Rondo reverted back to Nike kicks tonight after getting a taste of Puma.

The Nike Kyrie 5 he wore isn’t currently available, but you can find other colors at StockX, Flight Club, Stadium Goods, and DicksSportingGoods.com.

A Colorway Made for Kuz

Finally, we have a fellow Puma sneakerhead in Kyle Kuzma. The Lakers forward is one of the more prominent Puma sponsored athletes, so it makes sense he has his own team colorway in purple and gold.

The Puma RS-Dreamer “Purple Heart” can be found at StockX and GOAT.