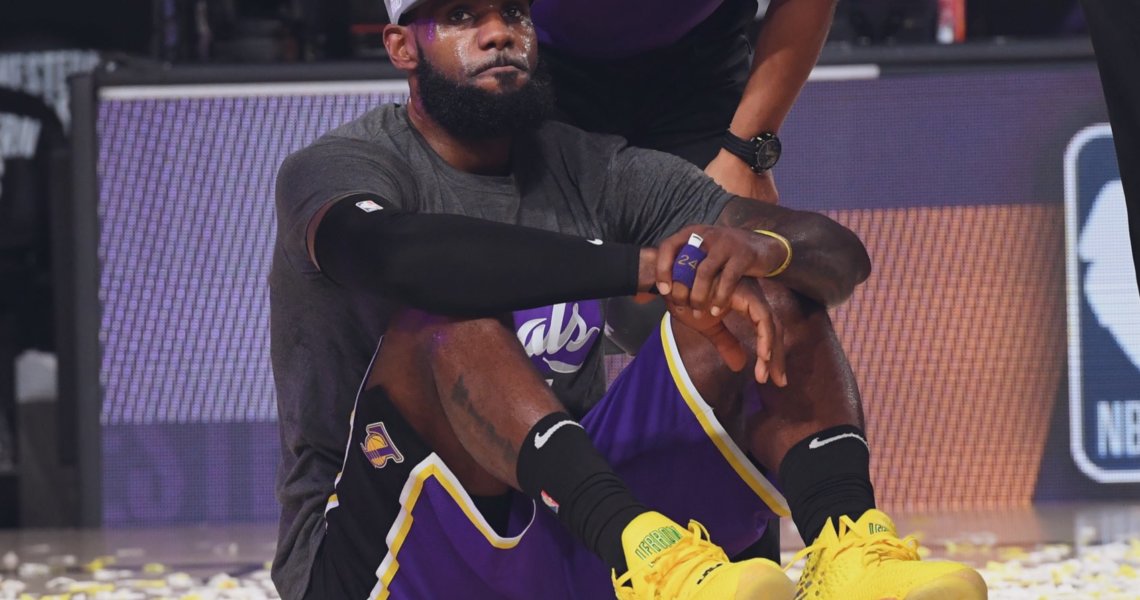 Welcome to Nightly Pro Notables: a collection of the hottest sneakers and biggest moments of the night on September 26, 2020.

It was a big bubble game for Lakers nation as Los Angeles once again saw their squad advance to the NBA Finals in the first time since 2010. This was once again on the back of LeBron James and Anthony Davis, with the King putting his team on his back in the 4th.

With their efforts, the gold confetti fell as the Lakers received their Western Conference Finals trophy:

With that saw comments from LeBron James himself:

For the Western Conference Finals champions gear including the hat and shirts, you can check HERE.

Of course, a WCF is only a stepping stone as the Lakers aren’t finished with their goal just yet.

And with that, check below for the biggest moments and hottest sneakers in this closeout game 5 between the Los Angeles Lakers and Denver Nuggets.

LeBron James moved one step closer to his 4th NBA title with his spectacular game 5 performance.

King James couldn’t be stopped this game. He even was able to look away and call this and-1 play even before his bucket slipped in the hoop:

The King dropped 16 in the 4th, answering every time the Nuggets got close. This 3-point shot clearly wasn’t drawn up but was the dagger in Denver’s chances of extending the series:

Anthony Davis couldn’t have said it better when paraphrasing LeBron: “it was his time.”

In total LeBron James tallied 38 points, 16 rebounds, and 10 assists for his 4th triple double of the postseason (with only Magic Johnson tallying as many in one playoff year.)

James rocked three sneakers on this historic night: first the purple and yellow PE Nike LeBron 17s for warm-ups. This colorway isn’t available, but you can find other colors at StockX, GOAT, and Dick’s Sporting Goods.

King James first half kicks was the purple Nike LeBron 7, which isn’t available at this time. You can find other colors at StockX, Flight Club, and Stadium Goods.

LeBron closed out the Nuggets in the yellow and mulitcolor scale PE. This Nike LeBron 17 is also unavailable, but you can find other colors at StockX, GOAT, and Dick’s Sporting Goods.

As the Lakers wouldn’t be denied a shot at the NBA Finals, you couldn’t say the same about Michael Porter Jr. on this play. Davis was on a mission here, with his arm well above the backboard square to deny this MPJ dunk attempt.

The Brow rocked a Nike Kobe 5 Protro PE in white, grey and purple this game. You can find other colors at StockX,GOAT, and Flight Club.

Pour One Out For Murray and Jokic’s Bubble Run 🍺

While their bubble postseason is over, you have to give it up to Jamal Murray and Nikola Jokic for their flair for the dramatics. They couldn’t overcome a third 3-1 deficit but their series ins of the Jazz and Clippers were the stuff of legends.

It was nice to see the acknowledgement from A.D. and the Lakers for Murray:

Murray was noticeably injured this game but gutted through in the yellow adidas D Rose 1 “Simeon”, which you can find at GOAT.

He then switched to the grey adidas D Rose 1 “Concrete” that can be found at StockX.

Jokic also got some love after the game from the King himself:

Jokic fought to make it a game, particularly on this sequence that Nikola steal the ball, then throw a dime pass while falling out of bounds for the Jerami Grant bucket.

Jokic once again rocked his blue and pink Nike Hyperdunk X PEs this game. This color didn’t release but you can find other colorways at StockX, Flight Club, and GOAT.

Finally, we end this section with some notable stats from both Nuggets stars, as they are now 1 and 2 in scoring in a single postseason, passing Denver greats in Carmelo Anthony and Alex English:

Rebound So He Caught It Off the Backboard

The Nuggets have a bright future with Michael Porter Jr. on the roster as well. MPJ finally got to show off his skill level in the bubble, particularly on this play. The Denver wing had Kyle Kuzma stumbling when he threw the rock off the backboard a la Tracy McGrady or Kobe. MPJ then retrieved the pass to himself before making the easy layup.

The Puma Clyde Hardwood Retro Fantasy that MPJ wore this game can be found at StockX and GOAT.

You can find this colorway at StockX and GOAT.