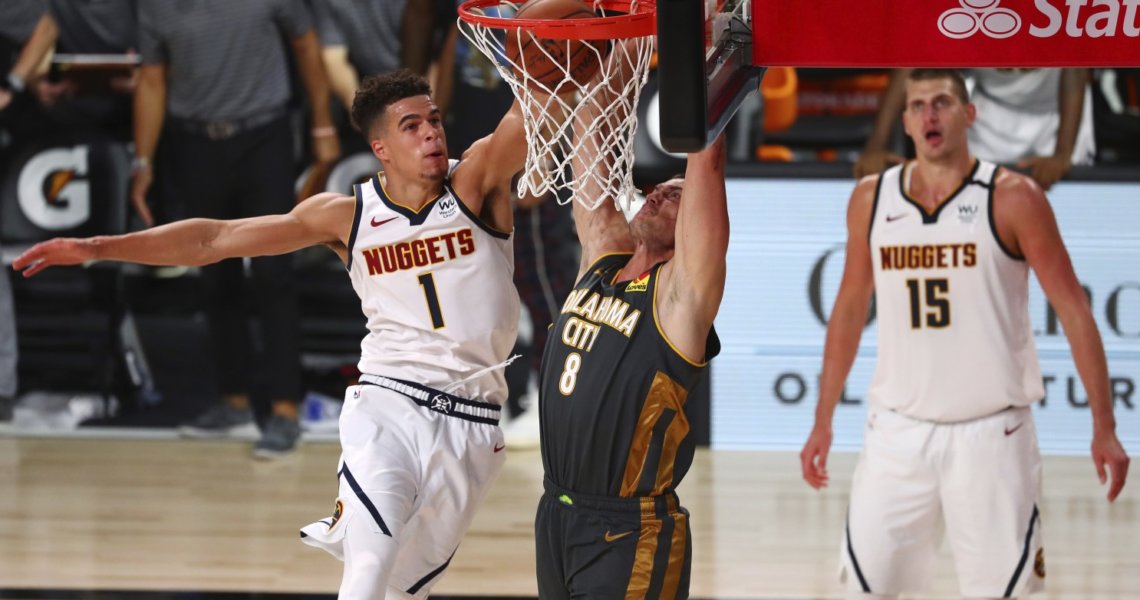 Welcome to Nightly Pro Notables: a collection of the hottest sneakers and biggest moments of the night on August 3, 2020.

Today’s slate of bubble games saw new career-highs for Michael Porter Jr. and Fred VanVleet, players on the opposite end of draft hype in their classes. On the highlight reel was relative unknown Shake Melton for the win, while LeBron and PJ Tucker brought the heat on feet. Check below for the best performances, highlights and kicks of the night.

The potential was always there for Michael Porter Jr. That alone tantalized the Denver Nuggets to draft him in 2018, knowing he had a severe back injury. This gamble looks to pay dividends in this bubble game against the the Oklahoma City Thunder.

Porter Jr. was going off in the first off, tallying an impressive 20 points and 9 rebounds when the second quarter concluded. MPJ tallied 37 by the end if the overtime period, as the Nuggets got a clutch win that helps them in the race for the 2nd seed in the west.

You can find the Puma Clyde Hardwood that Porter Jr. rocked at Puma.com and Dick’s Sporting Goods.

2019 Fred VanVleet was a sight to behold. The undrafted guard was a key cog in the Toronto Raptors NBA championship, but his game wasn’t a fluke. The Miami Heat saw this up-close in this bubble game, a Fred hit 3 after 3 with precision. This totaled 36 points, a new career-high for the underdog.

Fred VanVleet’s AND1 Attack 2.0 that he rocked for this career game is currently unavailable.

The high-point man on the day’s slate of 6 games went to Anthony Davis with a casual 42 points and 12 boards. Light work for the Brow.

The “Bruce Lee” Nike Kobe 5 shoes Davis was wearing this game can be found at StockX and GOAT.

Royce O’Neal played the part of Iggy in game 7 as he thought he had an easy layup. That was before King James swooped in for the huge block.

The orange colorway he wore isn’t currently available, but you can find the Nike LeBron 17 Low at Dick’s Sporting Goods.

The connection between Lonzo Ball and Zion Williamson have been on-point all season. The half-court lobs kept coming, although Anthony Tolliver seemed to miss the memo.

Zion posterized the Memphis Grizzlies big man in the Air Jordan XXXIV “Noah” player exclusive, which you can find at StockX and GOAT.

Confidence in Shake Milton seemed to wane after a heated argument last game with teammate Joel Embiid. Well, Milton stock is back up after the Sixers wing hit the go-ahead 3-pointer with 7.2 seconds left to give Philadelphia a 132-130 win.

The white and red Nike Kobe 5 PEs aren’t available, but you can find other colorways at StockX, GOAT, and Flight Club.

Even at the age of 33, Rudy Gay still can juke opponents. The equally old Al Horford was the victim here, who was lucky to have his knees hold up to Gay’s dribble moves. Rudy then went in and out after a quick post-up, nailing the fadeaway mid-range jumper from there.

The Nike Kyrie 6 style that Rudy wore this game can be found at StockX, GOAT, Flight Club, and DicksSportingGoods.com.

Kobe sneakers still dominate the league and it’s not just on-court. LeBron James made sure to step out in the “Alternate Bruce Lee” colorway for his tunnel fit in white.

You can find the Nike Kobe 5 Protro at StockX, GOAT, and Flight Club.

You gotta respect the diversity in PJ Tucker’s game. He’ll rock 1 of 3 samples one night then these Jayson Tatum player editions the next.

The wild patterns ties into Tatum’s frequent trips to the zoo with his son Deuce. Judging by some of Tucker’s past outfits, these Jordan 34s would match his wardrobe as well.

You can find this Jordan XXXIV “Zoo” PE for Jayson Tatum at StockX.