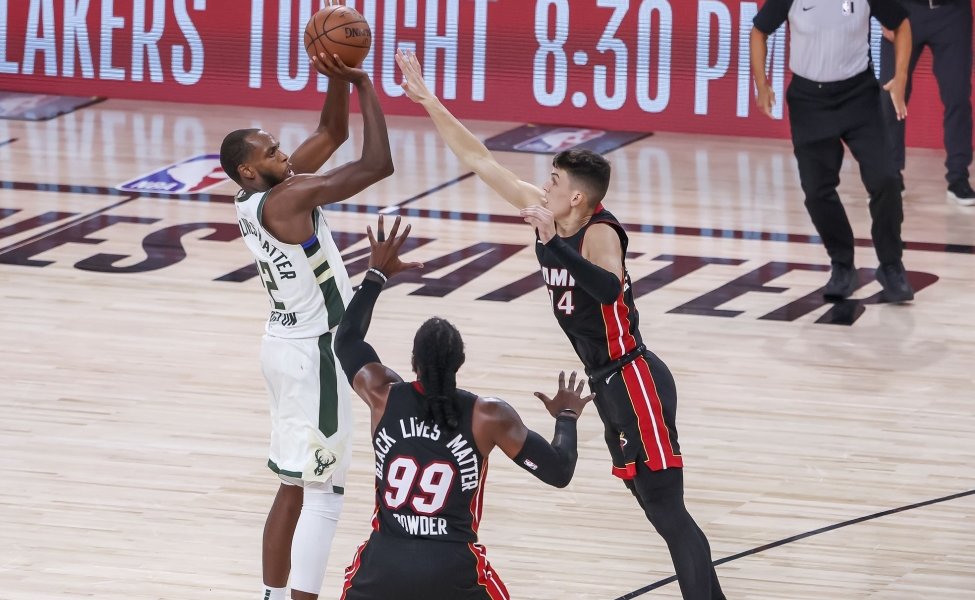 Welcome to Nightly Pro Notables: a collection of the hottest sneakers and biggest moments of the night on September 6, 2020.

After the 1-seeds were shocked two nights prior, the Lakers and Bucks bounced back with much needed wins. This was especially true for Milwaukee, who was on the brink of elimination. We saw huge games from Khris Middleton as well as a signature bounce back from LeBron James.

A handful of Kobes were rocked tonight including pairs from P.J. Tucker and Rajon Rondo. Without further ado, here are the best highlights and sneakers on another night of NBA bubble basketball.

Middleton Takes Over for Giannis

Things weren’t looking good early in the elimination game for the Milwaukee Bucks. Giannis Antetokounmpo rolled his ankle after carrying his squad despite another bad team performance. The Bucks getting swept in game 4 seemed inevitable, but Milwaukee’s second all-star wouldn’t go down without a fight.

Khris Middleton simply balled out this game, with his team making a concerted effort to switch smaller men over the wing. Khris found his rhythm and sank jumper after jumper, even icing the game in OT with a trifecta that put the Bucks up 4 with seconds remaining.

Middleton rocked the Nike Kobe 5 Protro PE in cream and green Bucks colors. This isn’t available at retailers, but you can find other Kobe 5s at StockX, GOAT, and Flight Club.

Potentially facing an 0-2 series deficit, LeBron James came to play in a game 2 win. James was flying in year 17, dunking all over the place including this slam off an Alex Caruso lob:

James also hit one three-pointer, with the King’s longevity leading him to 2nd all-time in playoff threes made.

James wore the Nike LeBron 17 “Courage” in black and red this game, which can be found at StockX and GOAT.

Another contributing factor to the Lakers win was L.A.’s other star Anthony Davis. The star big man poured it on from all parts of the court on his way to 34 points and 10 rebounds.

You can find the multicolor UNDFTD x Nike Kobe 5 Protro that A.D. rocked this game at StockX.

One of the better highlight clips of the night came in the WNBA bubble/wubble. Candace Parker exposes the ball over the defender’s head. Got eem. The fake allowed Parker to stroll to the rim for an easy two.

The yellow Los Angeles Sparks PE on her feet isn’t available, but you can find other colorways of the Pro Model 2G at Dick’s Sporting Goods.

P.J. Rocked His Own PE

The Sneaker King doesn’t just rock unreleased sneakers, he rocks his own shoes as well. P.J. Tucker wore a Nike Kobe 5 Protro PE made specifically for him tonight. This is rumored to release soon, but no news has dropped yet.

You can find other Kobe 5 Protro colorways at StockX, GOAT, and Flight Club.

After reportedly being a sneaker free agent at the moment, Rajon Rondo ditched his ANTA sneakers for something more familiar. Rondo was a Nike Basketball endorser prior to ANTA, and brought back the Nike Kobe 1 for game 2 against the Rockets.

You can find the Zoom Kobe 1 at StockX, GOAT, Stadium Goods, and Flight Club.

Sue Bird has been known to rock some wild Kyries in the past and today was not different. The Seattle Storm legend rocked a black and red gradient sneaker that fades into orange and yellow.

This Nike Kyrie 6 isn’t available at retailers, but you can find other colors at StockX, GOAT, Flight Club, and DicksSportingGoods.com.