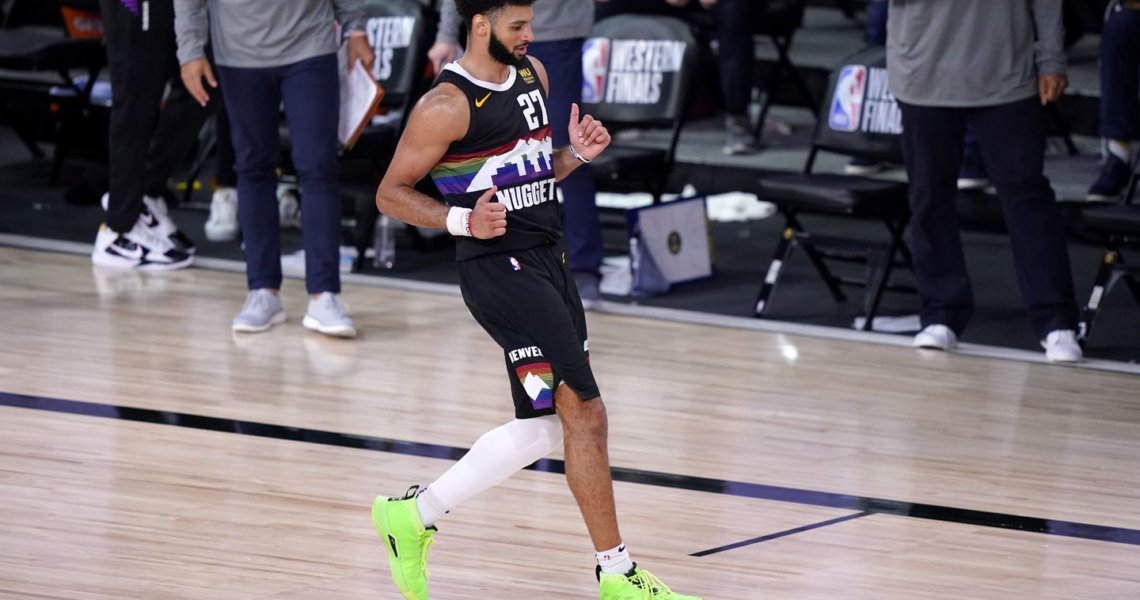 NIGHTLY PRO NOTABLES: Nuggets Get Back in the WCF on Back of Jamal Murray – September 22, 2020

Welcome to Nightly Pro Notables: a collection of the hottest sneakers and biggest moments of the night on September 22, 2020.

Tonight saw a huge game 3 effort from the Denver Nuggets, leading to a blowout in the 3rd quarter. Slowly but surely, the Lakers zone defense along with Rajon Rondo’s quick hands had Los Angeles roaring back to within 3. Huge efforts for Jamal Murray and Jerami Grant snuffed the comeback though, getting the much needed win.

Check below for all of these highlights in an entertaining Orlando bubble postseason game.

The top player of game 3 of the Western Conference Finals was undoubtedly Jamal Murray. The Nuggets guard was aggressive the whole game, in fact torching the Lakers since game 2 where Murray was a +17 when he was on the court.

Jamal was calm even as Los Angeles stormed back in the game, hitting big shot after big shot. This includes a wild back down and step-back 3 over Alex Caruso:

Jamal put the whole game away after this long trifecta followed by a little dance:

The bright green “Powerade Jam Fest” adidas Dame 5s that Murray rocked isn’t available, but you can find other colors at StockX and GOAT.

When the Lakers looked tired and out of it, LeBron James put the team on his back with timely scoring. James notched yet another triple double in the postseason, putting up 30 points, 11 assists, and 10 rebounds. King ish.

The white, purple, and yellow Nike LeBron 17 that James laced up isn’t available, but you can find other colors at StockX, GOAT, Stadium Goods, Flight Club, and DicksSportingGoods.com.

Denver needed a third player to step up alongside their stars and Jerami Grant answered the call. The Nuggets forward attacked the rim all night drawing 12 free throw attempts that helped Jerami drop a playoff-career high 26 points.

Grant rocked the Air Jordan 12 “Indigo” this game, which you can find at StockX, GOAT, and Stadium Goods.

On the other part of the Orlando bubble (wubble), A’Ja WIlson showed out with a dominant game 2 of the semifinals. The Las Vegas Aces youngster imposed her will on both ends of the court, dropping 29 points and 7 blocks on the Connecticut Sun.

The 2020 WNBA MVP slipped on a pink and green Nike Zoom BB NXT this game, which isn’t currently available. You can find other colors at StockX and GOAT.

Nikola Jokic has ascended into the upper echelon during the 2020 playoffs, mostly due to his passing. His shot-making has been a surprise though, as he makes numerous Dirk-like stepbacks in this game alone.

First was this one-legged jumper over King James himself:

Nikola upped the difficulty level on this stepback, one-legged shot of the pivot move. All over the long arms of Anthony Davis:

Alongside James, Rajon Rondo almost helped pull off an all-time playoff comeback with all three of his steals coming in the 4th quarter. This led to fast break bucks to the King:

Rondo also passed Kobe Bryant for 9th all time in playoff assists with 1041, all while rocking the Nike Kobe 1. Respect.

You can find this black and maize yellow colorway at StockX and GOAT.

Anthony Davis Has Every Kobe 5

In a season dedicated to the Black Mamba, Anthony Davis rocked yet another Nike Kobe 5. You can check past Nightly Pro Notable posts for all the other colors. Tonight the Brow rocked the 5x Champs gold and graffiti colorway, which you can find at StockX and GOAT.