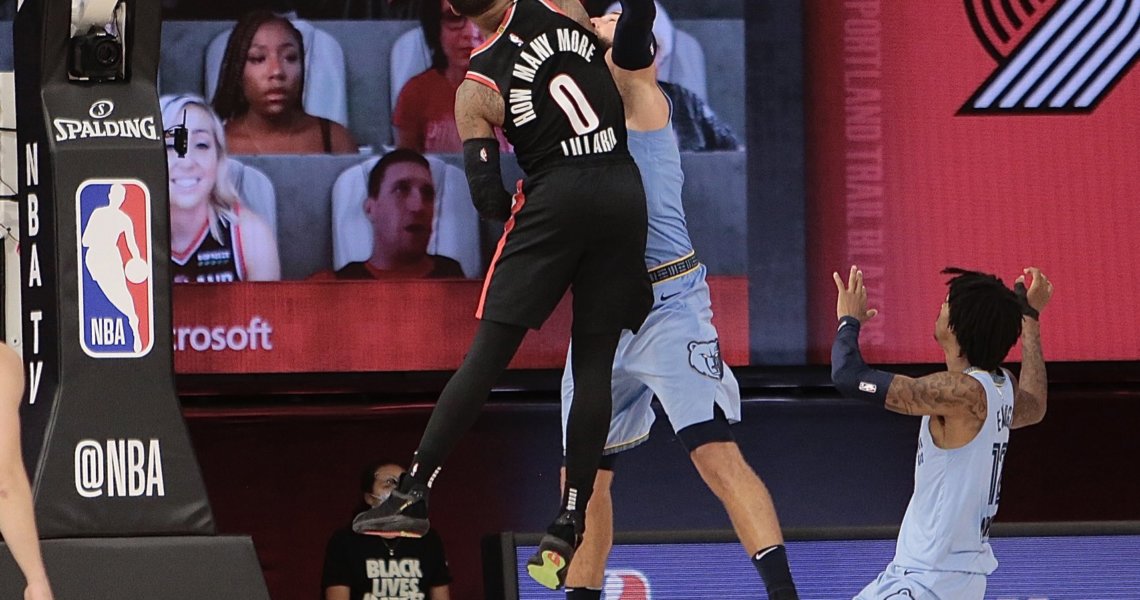 Welcome to Nightly Pro Notables: a collection of the hottest sneakers and biggest moments of the night on August 15, 2020.

The NBA’s first ever play-in game was today with the Portland Trail Blazers facing off against the Memphis Grizzlies. The stakes were high, as a shot at the top Western Conference seeded Lakers in the NBA Playoffs were on the line.

Portland just needed one win, but Ja Morant had other plans with a career game. The adversity was on the Blazers side even, with C.J. McCollum’s injury, Nurkic’s tragic day, and Melo being counted out for the last year. Check below for the stories and shoes from an exciting play-in game.

CJ Puts Blazers on his (Broken) Back

After 8 seeding games that each went down to the wire, the Portland Trail Blazers looked exhausted this game. This was particularly true for Damian Lillard, who had to put up 40+ point games just to reach this play-in game.

Not to worry though, as CJ McCollum had the juice in the fourth. Even with a broken bone in his back that he’s been playing through just about every game in the bubble, CJ gave the Grizzlies buckets. The guard from Lehigh cooked Ja Morant in the clutch on his way to 14 fourth-quarter points.

After a clutch mid-range jumper put the Blazers up 6 with 1:20 left, you can see McCollum mouth words. CJ later made a reporter clarify that he did say “he can’t fucking guard me” with emphasis on the third word.

McCollum ended up with 29 points and addressed his broken back after the W:

CJ rocked the Li-Ning YuShuai 13 in a PE grey colorway:

This isn’t currently available but you can find other colors at ShopNings.com.

Nurkic Shows Out for Grandma

Just hours before tip-off Jusuf Nurkic received news that his grandmother Hana had passed away from COVID-19. She had been battling the virus for weeks and Jusuf even considered leaving the bubble to see his ailing grandma.

After speaking to his family, Nurk decided to stay after working hard for over a year to recover from a brutal leg break. The Blazers dedicated this game to Hana, and Nurkic put on a show to honor her.

By halftime, the Bosnian Beast had 15 points and 17 boards and finished with 22 and 21 in the win. The game ball gift was an obvious choice after this performance:

Nurkic wore the Nike LeBron Witness 4 with custom Bosnian words printed, but you can find that colorway he wore at Dick’s Sporting Goods.

Even in the loss, the Ja Morant put on a show in front of a national audience. The Memphis Grizzlies guard slashed past Blazers defenders the entire game, showcasing his hops on numerous dunks. The presumptive Rookie of the Year put up a career-high 35-points this game, even getting praise post-game from Lillard and McCollum.

Ja rocked two pairs of shoes this game, first lacing up the Nike Kobe 9 in Brave Blue, which you can find at StockX.

After a slow start, Morant switched into the Nike Kyrie 6 in Midnight Navy Blue. This can be found at StockX and Dick’s Sporting Goods.

Much has been said about Carmelo Anthony’s resurgence this season after more than a year as a free agent. The Blazers need a jolt after injuries and Melo stepped in to keep the Blazers in the playoff picture.

NBA Twitter was all for celebrating Anthony after he came up clutch on a three-pointer that put away the Grizzlies for good.

Carmelo Anthony wore the Jordan M5.5 for this clutch shot, with colorways found at StockX and GOAT.

The Bubble MVP Caught a Body

Early in the morning on game day, Damian LIllard was named the Seeding Games MVP by unanimous media vote. It was an obvious decision with the guard from Weber State averaging 37.6 points a game, with games of 51 and 61 in the bubble.

Many of these points came off of tough threes and hard-fought free throws, but Dame had something else in his bag this game. In the middle of the 3rd, Lillard went full steam to the rim off a Nurkic pass and completely rose up against the 7-foot Jonas Valanciunas.

The blackout adidas Dame 6 that Lillard rocked on this poster dunk can be found at adidas.com. Other colorways can be purchased at StockX and Dicks Sporting Goods.