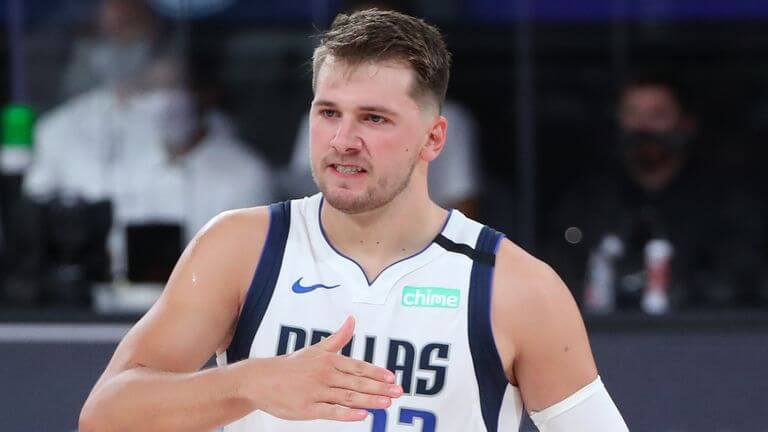 Welcome to Nightly Pro Notables: a collection of the hottest sneakers and biggest moments of the night on August 19, 2020.

On this day, Luka Doncic and Jayson Tatum continued their torrid scoring to help their teams get the W. Extra hang-time is featured in the highlights of the night, while the UNDFTD Kobe 5 makes it’s debut on the courts.

With another 1st round playoff day in the books, check below for the best footwear and moments seen in the Orlando bubble.

Helping gain a 2-0 series lead, Jayson Tatum was in his bag making 8-12 three-pointers on his way to a team-high 33 points.

Jayson gave everybody something to “Taco Bout” with the Air Jordan 34 PE.

While this colorway isn’t available, you can find other colors of the Jordan 34 at StockX and DicksSportingGoods.com.

After a sterling performance in game 1, Luka Doncic put up more big numbers in a game 2 win against the Los Angeles Clippers. With 70 points combined, Luka narrowly passed Kareem Abdul-Jabbar for the 2nd most points through the first two playoff games in NBA history, only behind George Mikan’s 75.

Luka rocked a white, blue, and green player edition this game, but you can find other colorways of the Jordan React Elevation at Nike Store and StockX.

Hardly will you see a flashy dunk on the fast break, but Jaylen Brown went a little extra on this 360 spin dunk.

The orange adidas Dame 6s that Brown rocked isn’t available but you can find other colors at StockX and Dicks Sporting Goods.

Donovan Mitchell has always had the extreme hang-time, and utilizes this not for a dunk but on a dime pass. Spida hung for forever on this play, before adjusting mid-air, spinning 180 degrees and finding the open man.

Jordan Clarkson adds a little extra on this dunk over Nikola Jokic, hanging extra long on the rim in his Nike Zoom Freak 1s.

You can find Freak 1 colorways at StockX, Stadium Goods, and GOAT.

Montrezl Harrell’s grandmother passed while the Clippers first arrived in the bubble and he just recently returned to the team. Trezz paid tribute to “mamie” with a custom message on his Reebok Question 1s.

The “Red Toe” colorway can be found at StockX.

Anthony Davis debuted the white and teal UNDFTD Nike Kobe 5 Protro just the other night now the 2nd colorway has graced the bubble courts. This time around Brooklyn Nets Guard Joe Harris laced up the “What The” version, with colors from all 12 teams that passed on Kobe Bryant in the 1996 NBA Draft.

You can find this multicolor UNDFTD x Nike Kobe 5 Protro at StockX.

The reigning NBA Finals MVP wore a new colorway of his signature shoe. The red and orange sneakers that Kawhi Leonard laced up, don’t have a nickname but does remind you of the on-fire shooting that the Klaw is known for.

The New Balance THE KAWHI has not released just yet.

This “Glow Pink” colorway of the adidas Pro Model 2G can be found at StockX.