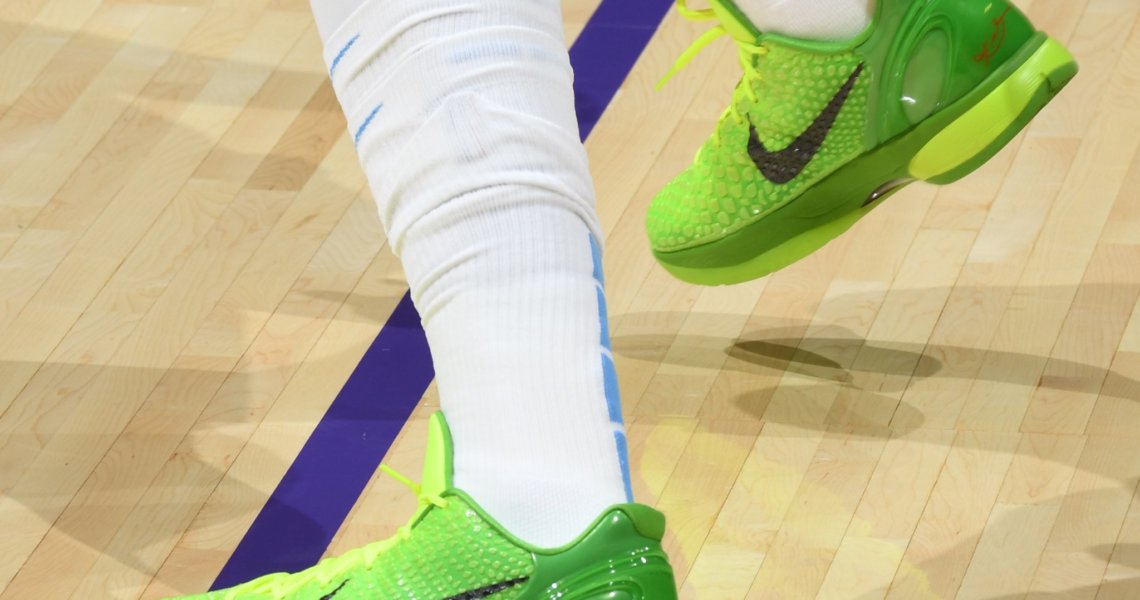 Welcome to Nightly Pro Notables: a collection of the hottest sneakers and the biggest moments of the night on December 25, 2020.

Today, we had some huge scoring performances from the likes of Kyrie Irving and Zion Williamson. A few Christmas day records were also set. Meanwhile the “Grinch” Kobe 6 is back on-court thanks to Anthony Davis. Elf and Rudolph also get some footwear love, as you’ll see later in the article.

In Kyrie Irving’s first official (non-preseason) game playing in Boston, the man put on an absolutely show. Kyrie went to work early by nailing multiple threes. He then mixed it up with his signature handles and a fantastic lob to a rolling DeAndre Jordan.

Irving finished the game a blistering 7-10 from 3-point range, finishing with 37 points on his first Christmas game with the Brooklyn Nets.

The shoes that Irving laced up was the crimson pink and blue “Expressions” Nike Kyrie 7, which you can find at StockX.

The number 1 draft pick in the 2019 Draft still has a lot to prove on the court. Zion Williamson did show off his potential on a national stage though, stuffing the statsheet on Christmas Day against the Miami Heat.

His first Christmas bucket came on a fastbreak layup. Zion attacking the rim? Sounds familiar. In fact, Williamson got his 32 points and 14 boards exclusively at the rim or from free throws as a result of attacking the paint.

Zion got the double-double in the Air Jordan 35 “Bayou Boys”, an ode to Williamson’s new home in New Orleans. You can find this sneaker at StockX, GOAT and Flight Club.

‘Tis the season for giving and Khris “Kringle” Middleton decided to gift some buckets the Warriors’ way. Middleton let it fly from downtown and midrange, showing off that lethal shooting on his way to a game-high 31 points.

Khris wore a cream, blue and green Nike Kobe 5 Protro this game, which isn’t currently available. You can find other colors at StockX, GOAT, and Flight Club.

In case you forgot, Duncan Robinson showed off his sniper accurate shooting in a record way on Christmas Day. Robinson lit up the Pelicans with an NBA record 6 three-pointers in the first half. Duncan later tied a Christmas single game record with 7 total. The other man that holds that record was on the opposite end of this matchup, as Brandon Ingram dropped 7 trifectas just last Christmas.

Robinson rocked the Nike Air Zoom BB NXT “Rawthentic” colorway this game, which you can find at StockX and Dick’s Sporting Goods.

Another Christmas, another LeBron highlight. This year marks the 13th straight Christmas game that King James has played in his 18 year career. On this play, James showed off a vintage fadeaway on up-and-comer Luka Doncic. The jabstep, Dream shake fake, then fallaway made this shot ever more difficult, but the ball still fell straight through the net.

The kicks the King was rocking was the Nike LeBron 18 “Xmas in LA”, which will release on December 30, 2020 at Nike Basketball retailers.

That New New for Jamal Murray

With the recent news of Jamal Murray signing a deal with New Balance comes the young Denver guard’s unveiling of brand new NB kicks. Slam Kicks refers to this as the New Balance Two Way sneaker, although there isn’t official word from the company yet on the name.

Regardless, Murray’s initials are featured on the tongue, indicating a signature shoe or at least more player exclusives are on the way.

Merry Grinchmas from the Brow

Anthony Davis has been rocking Kobes going on three years now and is one of the main players to continue Bryant’s sneaker legacy. As such, he gets first access to the latest Kobe sneakers and was the first player to unveil the Kobe 6 Protro “Grinch” on Instagram.

Ten years after the Black Mamba rocked the iconic Christmas colorway against LeBron, Davis is bringing back the Protro alongside LeBron.

You can find the Nike Kobe 6 Protro “Grinch” at StockX, GOAT, and Flight Club.

For the (Elf) Culture

Puma recently scored a collab deal with the creators of the holiday classic Elf. As such, the company’s hoopers had to rock the shoes for the occasion. Puma even dropped a onesie with Buddy the Elf quotes that Michael Porter Jr. showed off pregame:

The footwear from the collection includes the Puma Clyde All-Pro that Kyle Kuzma rocked in the Lakers game:

You can find the Puma Elf shoes at StockX.

Montrezl Harrell has had his share of wild Reebok customs in the past but this one may take the (ice cream) cake.

This Reebok Question was done up to feature fur like that on the claymation Abominable Snowman in the 1964 Rudolph the Rednose Reindeer tv special.

This custom isn’t available to purchase, but you can find other Reebok Questions at StockX and GOAT.