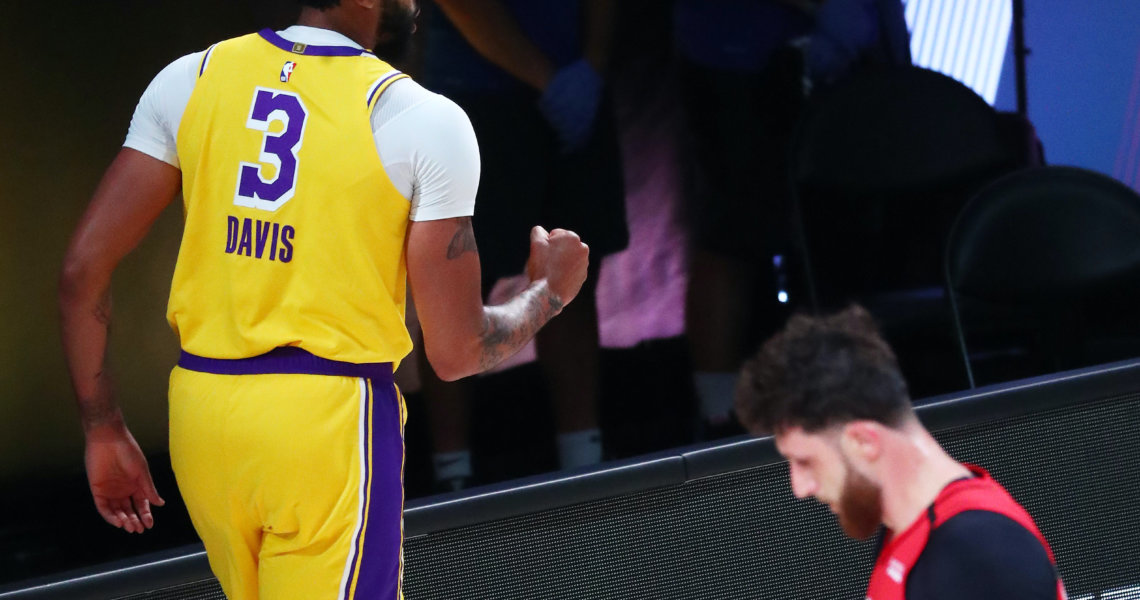 Welcome to Nightly Pro Notables: a collection of the hottest sneakers and biggest moments of the night on August 20, 2020.

Today we got impressive performances from the likes of Anthony Davis and even Duncan Robinson. We once again get eye-catching kicks from LeBron and Shai Gilgeous-Alexander. Melo also wore kicks that cost more than a grand, so check below for all the details on a day full of game 2s in the first round of the bubble.

After a disappointing game 1 loss to the Blazers, Anthony Davis put the team on his back in a stellar game 2 win.

The defensive player of the year candidate stifled Portland drives to the basket, like on this insane block on bubble MVP Damian Lillard:

The Brow was even cooking with dime passes, like this alley-oop to LeBron James:

Davis put up a 31 point 11 rebound performance in just 29 minutes, the star of the Lakers rout of the Blazers. Anthony put up these big numbers in the UNDFTD x Nike Kobe 5 Protro “Unlucky 13”, which you can find at StockX.

Here’s to You, Mr. Robinson

Duncan Robinson has had a breakout year in the Miami Heat rotation this season. D-Bo (yes that’s his nickname) showed off his smooth jumper in this W against the Indiana Pacers, sinking 7-8 three-pointers on his way to a team-high 24 points.

Giannis is HYPED After this Poster

Much like the Lakers, Giannis Antetokounmpo’s Bucks were slain in game 1 to the 8-seeded Orlando Magic. Milwaukee came back with a vengeance in game 2, with Giannis asserting their dominance on this slam.

The Greek Freak drove hard to the rim before spinning on Gary Clark. The poor soul didn’t stand a chance, as Giannis threw one down on his noggin.

Antetokounmpo’s poster dunk came while wearing the “White Cement” Nike Zoom Freak 2, which hasn’t released yet. You can find other colors at StockX and Dick’s Sporting Goods.

Jimmy is for the Kids

In a funny highlight, old whippersnapper Jimmy Butler had some fun with the 20-year old Tyler Herro. Excuse me, while I ask my niece to put me on their “Tiky Tok” like Jimmy Buckets.

Butler cracked jokes in the Jordan Jumpman Diamond, which can be found at StockX.

LeBron is in MVP Mode

While his stats weren’t needed in the Lakers big win, LeBron James had most valuable player-caliber footwear with the Nike LeBron 7 “MVP”. This colorway was originally exclusive to King James, after he won his second consecutive MVP award in 2010.

You can find either the 2020 version of the shoe at StockX.

Shai Gilgeous-Alexander’s OKC squad lost today, but his kicks were a big W. The rising Thunder star rocked a custom “Black Lives Matter” colorway with a fist symbol on the sides. This version isn’t available, but you can find other Converse Pro BB All Star colorways at StockX.S

On the surface, Carmelo Anthony wore just another pair of Air Jordan 34s tonight in black and pink. Dig deeper though and you realize it’s the limited “Paris” colorway that is limited to 500 pairs and resells for more than a stack. See for yourself or ball out at StockX.