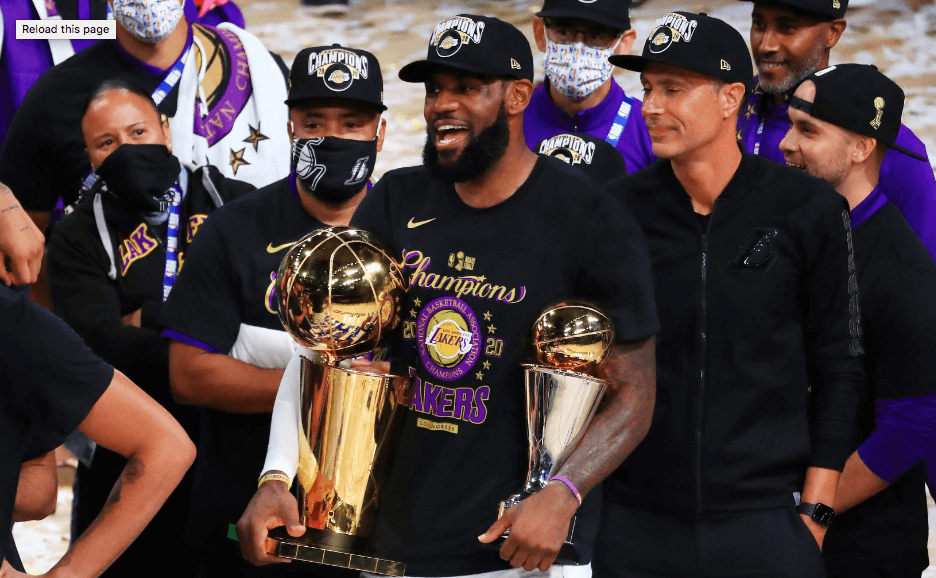 Welcome to Nightly Pro Notables: a collection of the hottest sneakers and biggest moments of the night on October 11, 2020.

This game wasn’t close, as the Lakers jumped on the Heat from the jump. By the time Goran Dragic stepped off the bench in his return from injury, Los Angeles was already up big and never looked back.

Eventually, the confetti fell for the Lake Show as they won 106-93 in the game 6 blowout.

In year 17, LeBron James won his 4th NBA championship and made sure to show his happy dance:

You can find the NBA championship t-shirts at Nike’s site HERE.

And with that concludes the Nightly Pro Notables from a long 2019-20 NBA season. It’s been fun to cover all the shoes and highlights from the Orlando bubble. Thanks for reading the last N.P.N. post on What Pros Wear until next season!

LeBron By the Numbers

Of course, the man who led the way for the Lakers was LeBron James. The King put up big numbers once again, dropping a 28 point triple double. This is James’ 11th career triple double in the NBA Finals, 28th total in the NBA Playoffs (2nd only to Magic Johnson.)

James was in his bag early, making behind-the-back crossovers like a guard while finishing like a big man:

LeBron made sure to bring the highlight dunks as well, including this fast break, cock-back slam:

Even and-1 dunks were easy for the King:

While Miami was whittling away at the giant 30+ point lead slowly, James put a stop to that with this slam with a backboard slap for good measure:

With the W, James further chases GOAT status, winning his 4th title and 4th NBA Finals MVP. This makes LBJ the first player to win Finals MVP for three different teams. He is 2nd only in Bill Russell trophies to Michael Jordan with 6. In his acceptance speech, LeBron wanted respect put on his name:

May the Greatest of all Time conversations fire up for the offseason.

King James won chip number 4 in a peach/ orange colored Nike LeBron 18, that isn’t currently available. You can keep eyes on StockX if this ever does release.

A.D. Did It For Kobe

Anthony Davis once again put on a defensive show, anchoring the interior D with blocks like the one above.

The Brow made sure to dedicate the moment to Kobe Bryant after the confetti fell:

A.D. made noise on the Internets with a “Black Toe” Jordan 1 inspired Nike Kobe 5 Protro. This colorway isn’t currently available, but you can find other options at StockX, GOAT, and Flight Club.

Outside of A.D. and LeBron, Kentavious Caldwell-Pope brought the scoring as a 3rd option all NBA Finals and provided 17 vital points tonight. 2 of which, came in specular and-1 fashion.

KCP rocked the “EYBL” Nike Kobe 5 this game, which can be found at  StockX and GOAT.

A decade ago, the Boston Celtics Rajon Rondo saw his team lose the NBA championship to Lakers in game 7. Facing another blown 3-1 Finals lead, Rondo made sure this wouldn’t happen again for the very Lakers franchise he loss to.

Rondo dropped 16 of his 19 in the first half, dropping layups with tenacity. As the buzzer sounded, Rajon won ring number 2 in the Puma RS-Dreamer in white and black that isn’t available right now. You can find a Lakers colorway at StockX and GOAT.

After the confetti fell, Rondo did slip into the Nike Kobe 5 Protro “EYBL” that KCP wore. Again, you can find this colorway at StockX and GOAT.

Pour One Out for the Dragon

You can tell in warm-ups the level of anguish on Goran Dragic’s face for not being able to play on the biggest stage. His status was a mystery since his game 1 plantar fascia tear but he finally was activated for game 6.

While it didn’t lead to the win, you love the see the heart for the veteran Miami Heat guard in his first NBA Finals series.

Dragic wore a black, red, and yellow colorway of the adidas Dame 6 which isn’t available. You can find other colors at StockX and Dicks Sporting Goods.

Pour a $20 Coffee Out for Big Face Butler

We wanted to dedicate some time to the founder of Big Face Coffee himself, Jimmy Butler, for winning the Orlando Bubble. In the three months at Disney World, no NBA player saw his stock increase more than Jimmy Buckets, who led a 5-seed to the Finals.

The Miami Heat star is currently a sneaker free agent, but did ink an apparel deal with Lululemon with Big Face Coffee gear upcoming. Things are looking up for Jimmy.

Winning Chip No. 2 with Mamba Flair

Despite not playing until the final minutes of game 6, Quinn Cook still got championship number 2 tonight (2018 for the Warriors being his first.)

Cook rocked the Reebok Question Mid in Lakers colors, a nod to Kobe Bryant’s sneaker free agency rocking a similar shoe back in the day. This gold and white Question can be found at StockX.