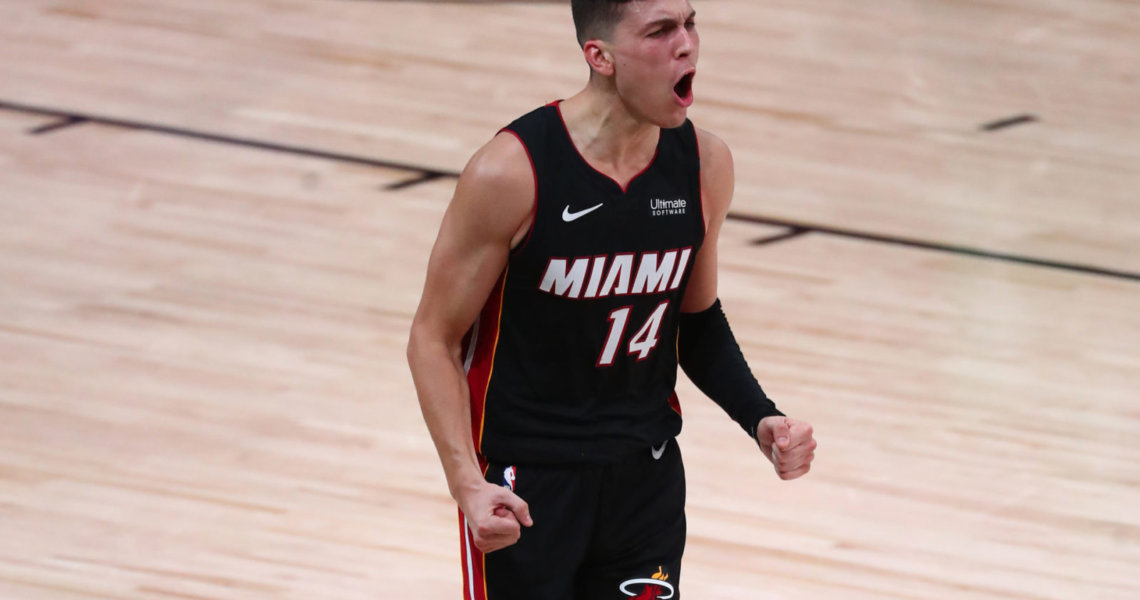 Welcome to Nightly Pro Notables: a collection of the hottest sneakers and biggest moments of the night on September 23, 2020. While the Boston Celtics clawed back into game 4 of the Eastern Conference Finals, one man made sure they took the L. Tyler Herro led the way and was among 4 Miami Heat players to drop 20+ points. This includes Jimmy Butler (24), Goran Dragic (22), and Bam Adebayo (20).

Check below for highlights for all of this #HeatCulture, as well as some of the newest kicks from Kemba Walker.

Can you believe he’s on 20? The rookie born in the year 2000 had the game of his life, literally topping his regular season career high with 37 points. This was historic as he was the first bench rookie to score this much since 1971.

Herro is also in select company in terms of scoring before the age of 21, only trailing Magic Johnson in points:

Tyler wore the EYBL Nike Kobe 5 Protro for this moment, which you can find at StockX and GOAT.

Tatum Was Not Having this Shot

After dropping 0 points in the first half, Jayson Tatum almost led the full comeback with 28 points. Jay also had an impressive block on the weakside, rejecting Goran Dragic’s shot into the stands:

Tatum rocked a “Taco Jay” PE of the Air Jordan 34 in this game, which isn’t available. You can find other colors at StockX and DicksSportingGoods.com

Miami thrives on the three-pointer but it’s Jimmy Butler’s grit that helps balance things out for the Heat. He threw a sweet wraparound pass on this play, then recovered the ball for this tough and-1 play.

Butler flexed on the Celtics in the Jordan Jumpman Diamond, which can be found at StockX.

In a nice series of events, Gordon Hayward tucked his chin over Goran Dragic’s shoulder, leading to his face fouling the Dragon’s arm on this 4-point play.

Dragic hit this improbable shot while wearing the adidas Dame 6 “Dame Time” in white, black and red. You can find this colorway at StockX and GOAT.

Much like a few of his teammates, Kemba Walker has been spotted wearing a colorful Air Jordan 35 in the Orlando bubble. This colorway is unique though as Kemba’s Jordan Brand logo is featured prominently on the tongue.

The AJ35 doesn’t have a release date yet, but stay tuned to What Pros Wear for more info.

Bam has mostly rocked the Kobe 5 at Disney World but switched it up today with a fresh pair of Nike Zoom Freak 2s. This red, black and white starred colorway isn’t currently available, but you can find other colors at StockX and Dick’s Sporting Goods.