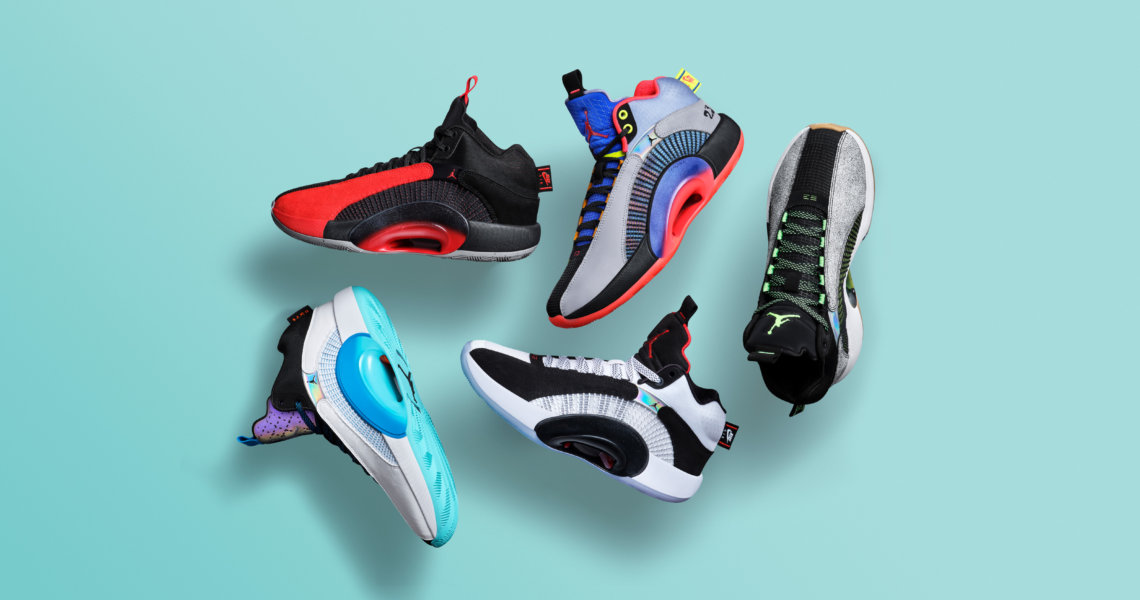 The new Air Jordan 35 improves on the popular AJ34 with support features like the Eclipse Plate 2.0. The eye-catching holed piece in the midsole now extends higher to the upper, providing support from rolling over.

Directly above this TPU plate are Flywire strands that the Jordan Brand dubs Flightwire. These strong wires combine with the Kurim material underneath to help lockdown the upper to your foot.

That Kurim netting will remind sneakerheads of the sides of the Air Jordan 5, which the 35 is loosely based on design-wise. The callback also includes puffy tongue, the padded heel shape, along with the 23 on the heel that is all directly taken from the AJ5. As lead designer Tate Kuerbis pointed out, the shoe will also harken back to the old days premium materials.

Unlike the Air Max based Jordan 5 though, the AJ35 has faster cushioning with large and bouncy Zoom units in the heel and forefoot:

The colorway seen on JB athletes like Jayson Tatum, Jeff Green, and Kemba Walker in the NBA bubble was the Air Jordan 35 “Center of Gravity”. This colorful version will release on on September 27 in China, globally on October 17.

This colorway might be familiar to sneakerheads, as it pulls directly from the black tongue Fire Red Air Jordan 5. Dubbed the “DNA” colorway, this homage will release on November 11.

Like on the AJ34, the 35 will see a slew of player edition colorways including this black and red color scheme for Rui Hachimura. The “Warrior” colorway features a Kanji-inspired samurai logo to showcase Rui’s Japanese heritage and warrior spirit. This colorway releases on October 21.

This Zion Williamson player edition is dubbed the “Bayou Boys”. Much like his 34 PE of the same name, this AJ35 is inspired by New Orleans with faux-gator wrapped in grey. This PE will release on November 30.

Based on the grace of a butterfly, the “Morphy” AJ35 features colors the represent metamorphosis of the insect. This is made to match Chinese guard Guo Ailun’s playing style. Since this is inspired by the Chinese Basketball Association star, this colorway will release exclusively in greater China on December 24.