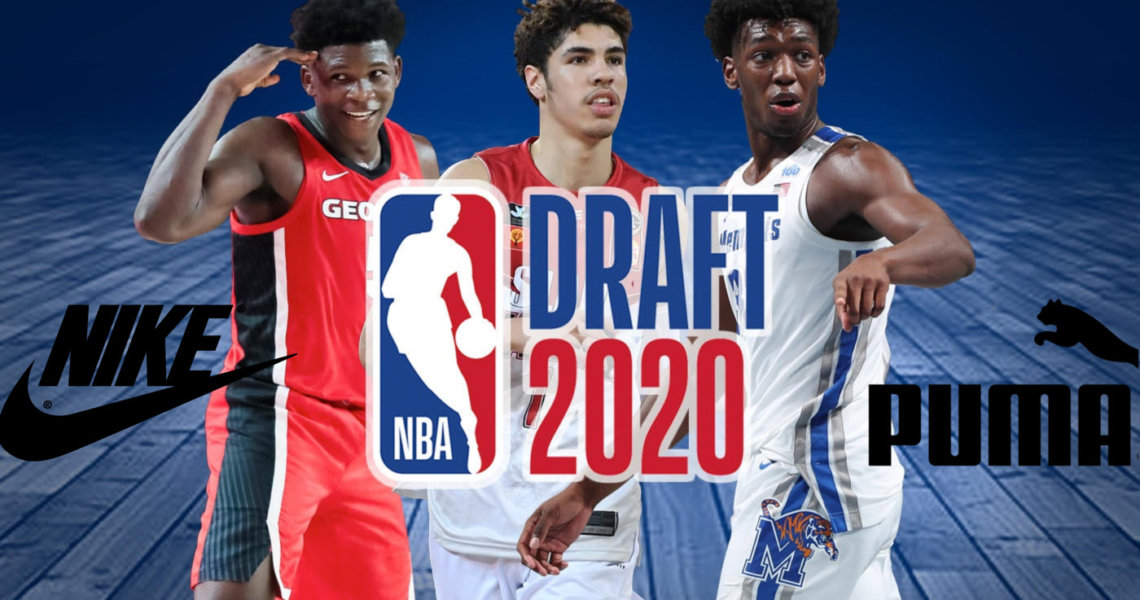 It’s 2020 NBA Draft time! The soon-to-be rookies won’t have the pleasure of summer league this year, with the season starting up in a month on December 22nd. With that accelerated timeline in mind, here is what sneakers to expect on the feet of the top freshmen in the 2020-21 season.

With the 1st pick in the 2020 NBA Draft, the Minnesota Timberwolves picked Anthony Edwards. The former Georgia Bulldog guard put up 19.1 points per game and earned SEC Freshman of the Year honors. Georgia is a Nike school, with Edwards rocking older swoosh sneakers like the Kyrie 5 and Nike Hyperdunk 2017 Low in his time in Athens.

One of the most heralded players in the NBA Draft, new Golden State Warrior James Wiseman sure is in a good spot. Adding the 2nd overall pick’s size to an already stacked Warriors squad with Steph Curry and Draymond Green will be dangerous to see.

Wiseman didn’t spend a lot of time with the Memphis Tigers, after the NCAA ruled him ineligible multiple times in his freshman year. In the 3 games he did play, the center rocked the Nike PG 2.

If James does remain with Nike, could we see him in Foamposites or Penny’s though to honor his Tigers coach and mentor? Hardaway was in the draft room sitting next to the Wiseman family, even after his reported payment caused James to be ineligible.

We shall see when Wiseman makes his debut.

While many draft picks are still in talks with shoe brands at this stage, 3rd overall pick LaMelo Ball already has one. No, not his never worn Big Baller Brand sneaker. The new Charlotte Hornet signed a deal with Puma in October worth a reported $100 million, with access to a private jet.

The new Charlotte Hornet signed a deal with Puma in October worth a reported $100 million, with access to a private jet.

If that number is correct, you can expect a signature shoe within a year or two (due to the long design process with sneakers.) LaMelo likely will start the season for the Hornets in a Puma team shoe like the RS-Dreamer. The J. Cole signature sneaker was very popular amongst the Puma roster this past season.

Melo previously rocked Nike shoes like the KD 12 while in Australia hooping for the Illawarra Hawks.

Chicago used their 4th overall pick on Patrick Williams. The wing from Florida State was highly touted out of high school, but too a lesser role with the Seminoles. Regardless, Williams did win ACC Sixth Man of the Year while showing sparks of his potential.

The defensive-minded Isaac Okoro was selected 5th overall by the Cleveland Cavaliers. The former Auburn Tiger was SEC All-Defense even as a freshman. Coming from Auburn, Isaac rocked the Under Armour Curry 6 for his time in Alabama. We’ll see if his UA allegiance will continue in the pros.

Another freshman was picked 6th overall, with the Atlanta Hawks selecting Onyeka Okongwu from USC. Prior to being a Trojan, Okongwu won back to back California Mr. Basketball awards given to the state’s best boys basketball player.

The big man was more low-key with his footwear in college, rocking the basic black/white Nike LeBron 17 in almost every game.

Not including LaMelo, the Detroit Pistons selected the first international player in 2020 in Killian Hayes. The French Guard is said to have untapped potential as a 19-year old as a passer and ballhandler, despite averaging just 12 points in last year’s EuroCup.

Hayes was a big fan of the Nike Kyrie 6 last year while playing for Ratiopharm Ulm, rocking multiple colorways of the sneaker.

Obi Toppin couldn’t hold back the tears when he was picked 8th overall by the New York Knicks. The 2020 Naismith College Player of the Year was born and raised in Brooklyn before playing two seasons at Dayton.

Toppin was particularly loud with his sneaker of choice last year, rocking the mismatched “What The” and “Soul Glo” Nike Zoom Freak 1 in his Naismith run.

Another international star was off the board when the Washington Wizards selected Deni Avdija with the 9th pick. Avdija made history by being he first Israeli-born player to be drafted in the top 10. Deni notably won the 2020 Israeli League MVP award, all while trash-talking his opponents and backing it up.

Avdija rocked the Nike Zoom Freak 1 with Maccabi Tel Aviv this past season.

Not to be confused with Big Wilie’s son, JALEN Smith brings his size and versatility to the Phoenix Suns new core with Devin Booker and Chris Paul. The former Maryland Terrapin was all-Big Ten, making the first team and defensive team in the conference.

Maryland is another Under Armour school, which meant Jalen wore the SC 3ZERO III this past NCAA season.

For the first time in 23 season, the San Antonio Spurs used their own pick in the NBA lottery portion of the draft. They used their 11th pick on Florida State’s Devin Vassell. The 20-year old guard looks to thrive as a 3-and-D player for Coach Popovich next season.

Vassell is yet another lottery pick to wear the Nike Zoom Freak 1 in college, opting for the “Coming to America” colorway.

Tyrese Haliburton may have had the suit of the night, but that didn’t help him slide in the draft. His purple collar did match up with the Sacramento Kings though, as they chose him with the 12th pick. The former Iowa State Cyclone will bring his 6’5″ frame to cause matchup nightmares for opposing point guards, while bringing his unorthodox (but effective) shooting to the Kings.

Arguably the draft’s best sneakerhead, Haliburton rocked a bevy of colorful Nike shoes including the KD 11, Kyrie 5, Kobe 8, Kyrie Low 2, and even the Air Jordan 11 “Concord”. For super high heat, Haliburton wore the Nike Adapt BB “Mag” and even a custom Kobe AD NXT. Impressive stuff to look for this season in Sacramento.