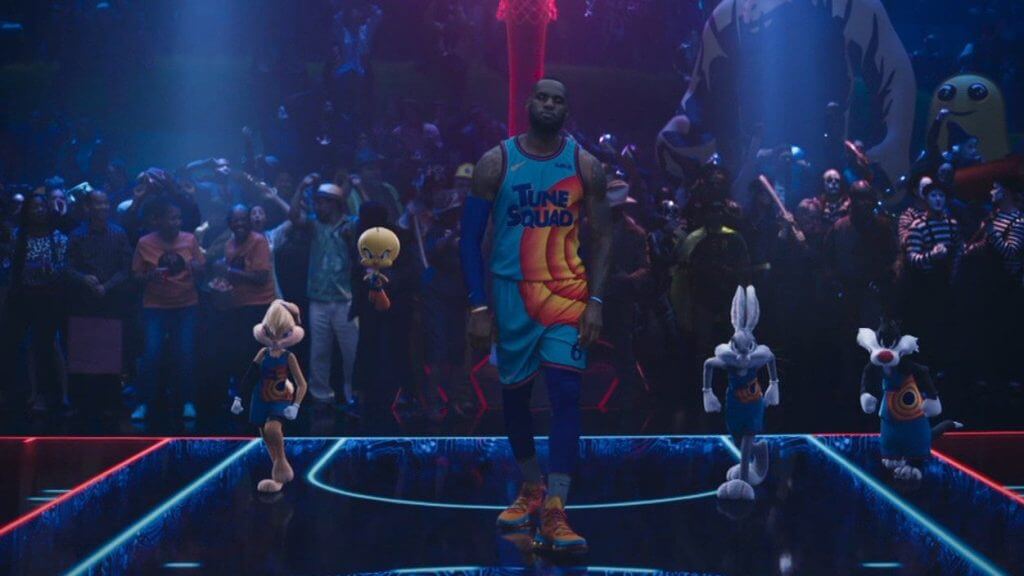 If you watched Space Jam 2: A New Legacy, you undoubtedly noticed the bevy of sneakers worn in movie. Much like its predecessor had Jumpman sneakers, this LeBron James-produced movie features Nikes everywhere. The King even (minor spoiler alert) imprinted a Swoosh into the ground when he fell into Tune Town. This makes sense as James has a lifetime deal with Nike. Even his on-screen family had nothing but swooshes on.

As for other brands, there are quick glances of Klay Thompson and Damian LIllard’s ANTA/adidas sneakers, but we couldn’t identify them due to the amount of CGI on their Wet-Fire and Chronos Goon Squad characters. More than likely, they are wearing their signature ANTA KT 6 and adidas Dame 6 shoes at the time they filmed their scenes.

With that said, here are the notable sneakers rocked in Space Jam 2 (spoilers ahead.)

The most prominently worn sneaker in the film was on the feet of James himself. LeBron and Nike coordinated the unveiling of the King’s 19th signature shoe just weeks before the release of Space Jam 2. The orange and blue colorway was worn most frequently in the movie, with the colors matching the bright Tune Squad jerseys in the pivotal basketball game.

Even the cartoon version of James was rocking the LeBron 19 in an all-red colorway.

James can even be seen writing the names of his fictional children on the blue “Space Jam” cartoon LeBron 19:

You can find the Nike LeBron 19 at StockX and GOAT after the shoe releases in Fall 2021.

In the beginning of the film, 1998 kid LeBron James is seen rocking the “Blue Fury” colorway of the Air Max Uptempo 95. This sneaker was originally worn by players big and small, namely Earl Boykins and Scottie Pippen.

The Blue Fury colorway shown in the movie released in 2019 but the style is in the era that LeBron grew up in. You can find this colorway of the Air Max Uptempo 95 at StockX.

Seconds later, LeBron’s friend Malik walks by to let him play with the original Nintendo Game Boy. Malik walks up in the Nike Air Tech Challenge 2, a sneaker worn by tennis star Andre Agassi in 1989. Multiple retros have released in this “Hot Lava” colorway and you can find all of them at GOAT.

LeBron’s real-life kids get new names, with his eldest son switching from Bronny to Darius as played by Ceyair J. Wright. Darius’ first introduction to the movie sees him rocking LeBron’s first signature sneaker in the Air Zoom Generation. This style released in 2003, with this black “King’s Rook” colorway retroing in 2017. You can find this colorway at GOAT.

LeBron’s younger son Bryce is replaced in this movie by Dominic, as played by Cedric Joe. His introduction saw him wear the multicolor Atmos x Nike Air Max 2 Light sneaker, which you can find at GOAT.

LeBron himself rocks a simple pair of Nike Epic React Flyknit 2 in an Oreo black and white colorway. This can be found at Stadium Goods.

Dom and LeBron appear on the WB Lot next and get sucked into the Serververse, where both are rocking the Nike Air Force 1. King James is rocking the classic all-white colorway, which you can find at Nike store.

Dom is wearing the AF1 LV8 in black, opti yellow, and orange peel gradient. This colorway can be found at StockX.

Al-G Rhythm even rocks the sneaker when he bulks up, wearing the Air Force 1 High in purple and white (found at StockX.)

LeBron’s right-hand man Malik in the film also is wearing blue and white AF1s (seen below), that aren’t currently available.

Alongside the rest of the James gang, Darius is seen rocking white and yellow Nike Blazer Mids, which you can find at StockX.

When Dom levels up his basketball skills from the encouragement of Al-G Rhythm, he upgrades his sneakers from the AF1 to the Nike Air Flightposite. This futuristic style dropped in 1999 and was notably worn by Jason Kidd and Allan Houston. This shoe isn’t new to the silver screen, as it was also worn by the Green Goblin in the original Spider-Man movie from 2002.

You can find the gold and black Flightposite at StockX.

Diana Taurasi appears briefly as herself as well as the White Mamba on the Goon Squad. The latter had a tail, so no sneakers were worn. Taurasi also appeared when Dom needed to scan hoopers for his game, where she was spotted rocking a grey Nike LeBron 16.

That specific colorway isn’t available but you can find others at GOAT.

Anthony Davis is seen in the Dom motion capture seen wearing a Nike Kobe AD PE in black, yellow and orange. You can find other colors at GOAT.

Later Davis shows up as his Goon Squad alter-ego “The Brow”, with the eagle-man rocking the Nike Kobe 9 Elite in the blue and green “Perspective” colorway. This can be found at GOAT.

Everything has been Nike so far, but some adidas did slip through editing for brief moments. Nneka Ogwumike is seen wearing the adidas N3XT L3V3L during the Dom scan scene. You can find this shoe at StockX.

Her Goon Squad alter ego Arachnneka is later seen wearing the adidas Marquee Boost Low, which can be bought at StockX.

At the end of the film, Dom gets his wish with LeBron allowing him to go to Game Design Camp. The young James walks off in the Nike Dunk Low in green and yellow. This Doernbecher charity colorway can be found at GOAT.

The craziest moment in Space Jam 2 was when “Michael Jordan” showed up to help the Tune Squad. Of course, it wasn’t THE Michael Jordan and any sneakerhead could tell, as this man walked in with the Nike Fear of God 1 instead of a Jumpman shoe.

You can find Michael B. Jordan’s black and white Nike Air FOG 1 at StockX.

After the credits roll, you can see members of the Tune Squad in the real world interacting with athletes and celebrities. After Porky Pig dropped bars earlier in the film, you can see him on stage with Travis Scott, whose rocking his brown Air Jordan 1 collab. You can find this Mocha sneaker at GOAT.

Cover image via The Undefeated