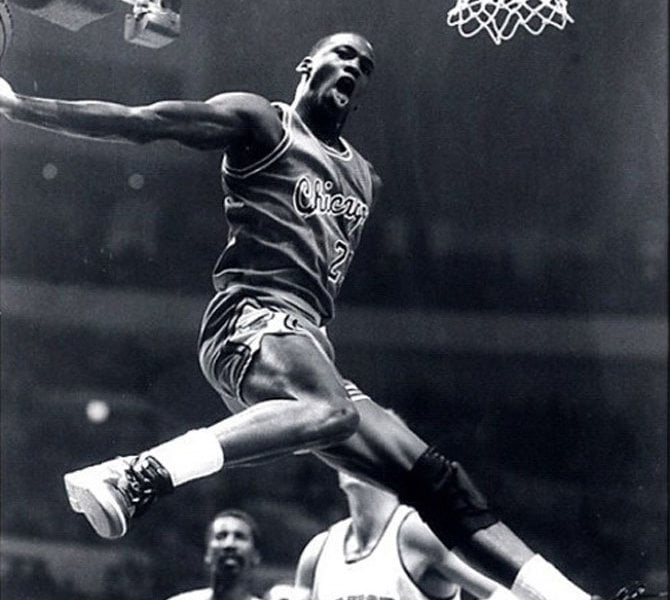 Despite debuting in 1984, the Air Jordan 1 is still one of the most popular sneakers and is regarded as an instant classic. Much of this allure is due to a series of Nike ads referencing the shoe being banned by the NBA. The only problem is; many people believe it was the Nike Air Ship that was banned and not the AJ1.

Michael Jordan was fined $5,000 every game he wore a certain pair of red and black, in accordance with the NBA’s “uniformity of uniform rule.” At the time, shoes had to be mostly black or white – with the loud red drawing the ire of the league. Then-NBA Executive Vice President Russ Granik even wrote a letter about the fines to Nike Vice President, Rob Strasser.

While written in 1985, the Chicago Bulls and Nike were first notified about the prohibition of red and black sneakers after the October 18, 1984 preseason game against the New York Knicks. According to Sole Collector, this was days after MJ was spotted wearing the Nike Air Ship on-court in those colors. Due to the lack of in-game photography, there aren’t many photos of Jordan ever wearing the Air Jordan his rookie season outside of the 1985 Slam Dunk Contest.

According to then Nike creative director Peter Moore, the black and red Air Ship was likely made just for Michael at the time. Despite rumors that Nike footed the bill on ever $5000 fine, MJ did wear league compliant colorways like the white and neutral gray version (according to Complex.)

The Nike Air Ship originally retailed for $35 and featured many of the same lines and leather panels as the AJ1. A game worn pair of the Air Ship was sold on eBay in 2015 by a former Lakers ball boy who asked Michael for his shoes. The pair sold for $71,554, but more interesting was the lower-profile Air Jordan 1 sole used on this pair. This would indicate that MJ was testing the Air Jordan 1 before it was ready for the market.

The rest is history with the Michael Jordan sneakers becoming so successful that it spun off into the Jordan Brand. The Nike subsidiary would continue the “Banned” Air Jordan 1 narrative until 2020, when the Jordan Brand finally retroed the Nike Air Ship in the “Beginning Moment’s Pack” alongside a PE Air Jordan 1 colorway.

You can find the Nike Air Ship in the Air Jordan New Beginning’s Pack at StockX and GOAT.