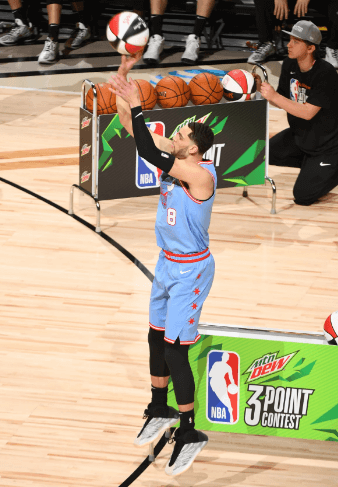 Zach LaVine is the technically the first NBA player to rock the adidas Yeezy BSKTBL basketball shoe on-court. Quavo rocked the Kanye shoes the night before in the 2020 Celebrity All-Star Game.

The three stripes dropped two Yeezy basketball sneakers in Chicago for All-Star Weekend. This includes the Yeezy BSKTBL and the Yeezy QNTM, with both sneakers looking similar. According to Yeezy Mafia, the BSKTBL features plastic caging on the Primeknit upper and doesn’t have the reflective material on the QNTM.

This Yeezy Basketball sneaker first leaked in April 2018, with no release info until February 2020. The NBA had planned to ban the Yeezy Basketball sneaker, as the 3M reflective material was deemed too distracting for audiences in the arena and at home. With LaVine wearing the shoes in the 3-point contest instead of a competitive game, the Chicago Bulls guard still rocked the non-reflective Yeezy BSKTBL shoe. Zach was eliminated in the first round with a score of 23, although his style points made LaVine a winner during All-Star Weekend.