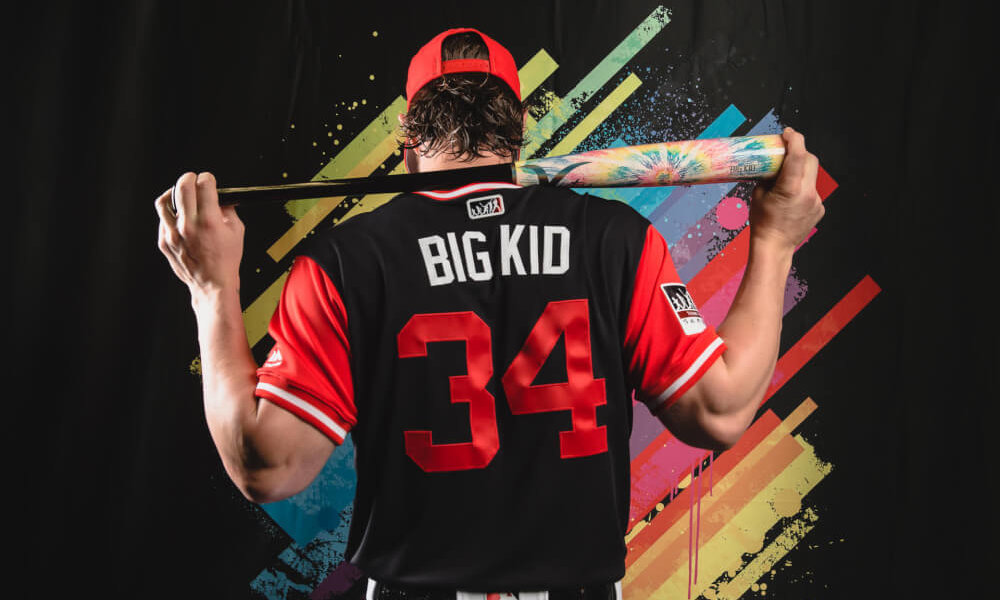 Not even 2 days into our first ever BEST OF WPW, and you, the readers, have cast 40,000 votes.  Thank you to everyone who has voted so far, and please keep following our IG stories every day until Christmas Day to cast your vote. Players Weekend features heavily in the inaugural Best of WPW, and that figures to continue if the bat companies are half as creative as they were in 2017.

We all assumed Players Weekend would crush as far as custom cleats goes, but the bats were a total surprise, including Birch specialist B45’s incredible “family portrait” seen below. Jonathan Lucroy, Keon Broxton, Bryce Harper, and Cargo received some pretty spectacular painted portraits on the sweet spot of their favorite B45 cut.  Tommy Joseph didn’t want to catch a face barrel so he went with the Liberty Bell. Cargo’s G5 stands out thanks to the sleek Venezuelan flag overlay on the B45 trademark.  PURE SHOW.

Get Cargo’s signature cut, the Cargo 5, with that same tapered handle that Cargo loves at this link.  To achieve full “Cargo,” tape the bottom hand only: Maybe I’m partial to the Venezuelan colors, but they really do pop.  Jose Altuve dressed as a rainbow for Players Weekend, and even though he swung Victus for most of the season, Sam Bat’s paint job was just too fire to leave in the bat rack.  Altuve hit a bomb with it, of course.

Even when Altuve had that Friday night off, he still kept it on the bench just so everybody knew who was boss.

The bat was so pretty it made the New York Times.

You can shop Altuve’s Sam Bat JA27 at this link.  It has a similar profile to the Sam Bat’s MC1/CG1, with a thin handle and an extended sweet spot.

The saddest storyline of Players Weekend was that Bryce was out for it.  Bryce had heaps upon heaping heaps of baseball swag on deck for it.  This Rawlings bat wasn’t even the sickest thing he had ready, but we could only choose one.

Actually, that’s a lie.  We chose two (keep reading for the other).  This Rawlings BH220 stood out from the crowd for its design.  Interestingly, it was the only one with the Cargo knob.  Rawlings offers a Pro Label bat under Bryce’s name at this link. Just a fantastic design.  Astros Tequila Sunrise jerseys forever.  Get the H-Town design in a “well-balanced” and “durable” JC24 similar to the 271.

Victus is offering an Axe “X50” which we’d guess is the same profile as Springer’s MB50.  Get that here.

This picture, in itself, might just win Bryce the contest.  Sex appeal for days. This bat has it all.  Dog prints.  Cacti.  Batman.  Kike Hernandez’ seems like the type of guy who would be pondering these items while simultaneously hitting 3 bombs to bury the defending champs. Wes crushed it with this design.

Get the Chandler CC13 at JustBats.com. The performance.  The paint.  The total package.  A great look at the full details via Just Bats:

Incredibly, this bat, custom paint and all, can be had. JustBats.com is offering it in a very limited quantity at this link. When I die, please bury me with Sanchez’ “Kraken” so I can barrel baseballs in the Afterlife.

Gary Sanchez’ Kraken AP5 was given to him by Victus ahead of his HR Derby.  It didn’t even see the field that night, which likely determined the outcome of the contest. Instead, Sanchez hit with a more traditional version similar to the above bat, and he fizzled out in the semis.  I understand the sheer brilliance of the design might make you want to shelf it, but its like @dieselbats, the artist said:

These are not trophies, they’re made to do damage #thekraken #baseball #baseballbat

“These are not trophies, they’re made to do damage.”

Greatest bat I’ve ever seen.  Somehow, JustBats.com has made it available, numbered to 24, and you can get it here.

The bat’s box is also unbelievable and as we understand it, that was made by @smuglabs.

GO TO IG NOW AND VOTE.  ONLY A FEW HOURS LEFT.