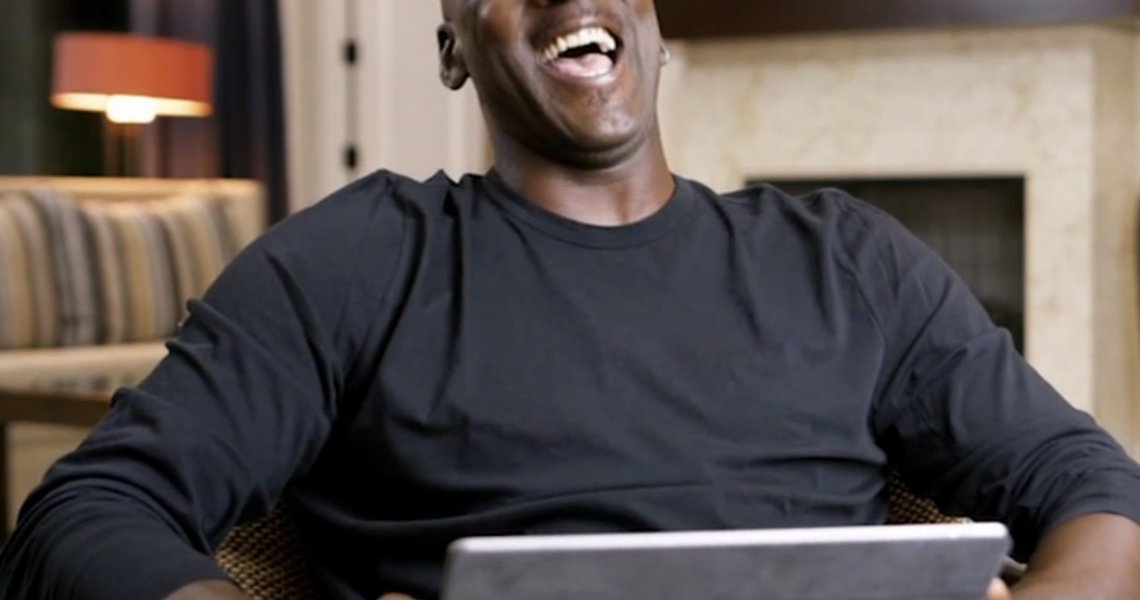 Every Sneaker Worn in The Last Dance: Episodes 7 & 8

The Last Dance takes a never-before-seen look at the last season of the Chicago Bulls dynasty. The fourth batch of two episodes released on May 10, and dug into the titanic turn of events after Michael’s father James Jordan was murdered. Mike would go on to play baseball, un-retire from basketball, star in Space Jam, then reel off the greatest season in NBA history.

Of course, Michael Jordan wore a lot of kicks in this time. Without further ado, here are all of the shoes worn in the Last Dance episodes 7 and 8.

Once again, the shoes featured prominently in the 1997-98 season was the Air Jordan 13. As the name suggest, Michael is shown rocking the “Playoffs” colorway during the postseason series against the Charlotte Hornets and New Jersey Nets.

The “He Got Game” colorway can be seen in practice as well as the “Cherry” version. The latter is also spotted when Michael has a bat in his hand and a cigar in his mouth.

Curiously, Mike was spotted wearing an all-black sample colorway of the AJ 13. This looks similar to the “Black Cat” colorway that released in 2017.

For a few seconds of montage film, you can see Jordan rocking the Air Jordan 8 prior to his retirement at practice.

Mike is very briefly shown wearing the “Bugs Bunny” colorway later when facing off against LaBradford Smith (more on him later.)

After Michael Jordan shocked the world by announcing his retirement, he had a press conference to give a shot at professional baseball. In the footage, Mike can be seen rocking a Chicago White Sox jersey and the Air Jordan 9 while throwing baseballs.

Mike never played for the White Sox, but did suit up for the AA affiliate in the Birmingham Barons. MJ wears the black and white AJ 9 Cleat a lot, including on the Sports Illustrated cover that infuriates the GOAT.

You can find the Air Jordan 9 at StockX, GOAT, Flight Club, and Stadium Goods.

The baseball cleat can be found at StockX.

After the baseball strike stopped MJ’s promising minor league career, former Bulls teammate B.J. Armstrong invited Mike to say hi in a practice. This was the catalyst for Michael to return to the game. In one practice scene, you can see Jordan rocking the “Shadow” AJ 10.

The white, black and red colorway was shown a few times, first from Scottie Pippen’s “bat signal” for Mike to return on national TV.

The documentary then cut to close ups of this colorway.

The shoe eventually made it onto the hardwood in Mike’s first game back against the Indiana Pacers. His return to form game against the Knicks saw him score 55 points in the shoes, hence the “Double Nickel” nickname. You can read more about that game HERE.

Nick Anderson notably wore his own player edition AJ 10 in the Orlando playoff series that followed.

You can find the Air Jordan 10 at StockX, GOAT, Flight Club, and Stadium Goods.

A nice Easter egg was spotted by Matthew Welty, who saw Mike wear the Nike Air Challenge LWP before his first game back from retirement. This sneaker is most well known as Andre Agassi’s footwear during his 1995 Australian Open win.

This sneaker is currently unavailable at retailers.

The “Space Jam” colorway was seen in (surprise) footage of filming for the movie Space Jam.

The “Concord” colorway was most seen, first in Mike’s first playoff matchup against the Orlando Magic after returning from retirement.

Jordan famously got fined for wearing the AJ 11, which you can read more about HERE.

Mike can be seen lacing up the Concords much like he did with his shoes in past episodes of the Last Dance.

He then rocked the iconic colorway at the Jordan Dome, which was made on the set of Space Jam for Mike to get his reps in.

The drip was real when MJ wore the shoes off-court too. Jordan famously told designer Tinker Hatfield the shoes would be rocked with suits.

You can find the Air Jordan 11 at StockX, GOAT, Flight Club, and Stadium Goods.

Very briefly in the Last Dance, you might have spotted Mike in black Nike shoes in his series with Orlando. You can read more on why Jordan didn’t wear his signature sneakers HERE.

You can find the Nike Air Flight One at StockX, GOAT, Flight Club, and Stadium Goods.

Now that the retro Jordans are accounted for, we can dive into the Easter eggs of the episode.

In one shot of practice, Mike is seen rocking his team sneaker in the Jumpman Pro Quick.

You can find the Jordan Jumpman Pro Quick at StockX.

Jordan sneakers weren’t just worn by Mike himself. The Jordan Jumpman Team 1 was prominently worn in episode 7 and 8, first by B.J. Armstrong with the Hornets. Yeah, maybe you shouldn’t yell in MJ’s face after hitting a game-winner.

While his kicks weren’t shown, Scott Burrell also wore the Jumpman Team 1 when he dropped 23 points to close out the New Jersey Nets.

You can find the Jordan Jumpman Team 1 at GOAT.

Speaking of players who Michael drew motivation from… LaBradford Smith’s introduction into the Last Dance was wild. The game he scored 37 points in against the Bulls should just be a blip in MJ’s career. As many of these points were against Mike, he made up a story of how Smith told him “good game” after the buzzer. Michael torched LaBradford for 36 in the first half the following night.

The sneakers that LaBradford wore for the game of his life was the Nike Air Ballistic Force Mid, which has not returned since it dropped in 1992.

Now onto the shoes of the other Chicago Bulls. Without Michael Jordan in the 1993-94 season, rookie Toni Kukoc had to step his game up. The Croatian sensation responded with game-winners through the year, including the game 3 buzzer-beating, game-winner in the playoffs against the Knicks.

The Nike Air Prevail that he rocked this game is currently unavailable.

The other man at the center of Kukoc’s game-winner was Scottie Pippen. The Bulls star sat out the final seconds of the game as coach Phil Jackson didn’t draw up the final play for Scottie.

Pippen would redeem himself two games later when he threw down one of the hardest dunks on Patrick Ewing in the Nike Air Swift:

Pippen put up MVP numbers in the 1993-94 season as well, while in the Nike Air Swift. You can find this style at GOAT.

Back to the 1996 NBA Finals where Gary Payton was a topic of discussion. Not necessarily for Michael Jordan, who laughed at the idea that Payton was locking him up on defense.

The Nike Air Thrill Flight that GP wore for the finals is currently unavailable.

Beside Payton on the Seattle Super Sonics was Shawn Kemp. Surprisingly, the Reignman didn’t wear his nick-namesake signature shoe that dropped in 1995, or the Reebok Kamikaze he is synonymous with.

Instead, Kemp rocked the Reebok Optix Mid during the 1996 NBA Finals, which isn’t currently available.

On the opposite end of the court in the 1996 NBA Finals was Dennis Rodman in the Nike Shake Ndestrukt.

You can find this sneaker at StockX and GOAT.

Beside Michael and Rodman in the 1996 NBA Finals was Scottie Pippen in the Nike Air More Uptempo. While not his signature shoe, the eye-catching style has become synonymous with Pippen, who also wore the style during the 1996 Summer Olympics.

You can find the Nike Air More Uptempo at StockX, GOAT, Flight Club and Stadium Goods.

Very briefly in the documentary, Steve Kerr’s kicks were shown as he was getting picked up by a teammate.

He’s rocking the Nike Air Force Mid 94 in this shot, which is not currently available at retailers.