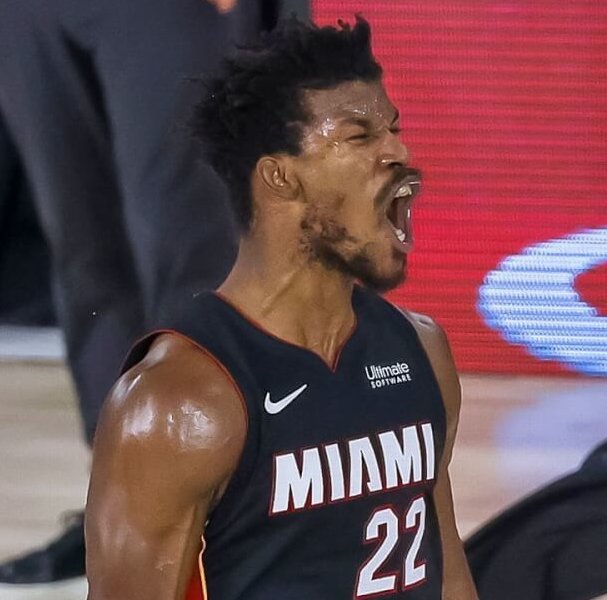 Welcome to Nightly Pro Notables: a collection of the hottest sneakers and biggest moments of the night on August 31, 2020.

We see clutch performances tonight from Jimmy Butler and CP3. On the sneaker side, P.J. Tucker wore another expensive pair of Jordans, while Jeff Green reps his alma mater Georgetown on a pair of PEs. Check below for all of the best sneakers and highlights in the Orlando bubble.

Many assume the Milwaukee Bucks are a shoe-in for the NBA Finals. Nobody told Jimmy Butler that though. Like his nickname suggests, Jimmy got buckets including this massive dunk over the extended Donte DiVincenzo:

CP3 Ties It Up Against His Former Team

The point guard matchup in the OKC Thunder vs. Houston Rockets series as the most interesting plot point as the seeding games concluded. Russell Westbrook has been injured for most of the series, but Chris Paul has hurt his former team like in tonight’s game 6.

With his team down in the 4th, CP3 put the team on his back with 20 second half points. He also made the go-ahead free throws with less than 10 seconds remaining. With the game nearly in hand, the petty Paul stared down former teammate James Harden as if to say “and you didn’t want me on your team.”

Paul dropped 28 total in the Thunder’s win, forcing a game 7. He did this while rocking a PE sneaker based on the Shaw University Bears. This is one of many small college colorways CP has rocked in the bubble that isn’t available.

You can find other Jordan CP3.XII colorways at GOAT.

A New Assist Queen in WNBA

Moving to the Wubble for a moment, we have a new single game assist leader in Courtney Vandersloot. The Chicago Sky guard initially tied Ticha Penicheiro’s record of 16 assists with 3:22 remaining. Courtney broke the record with under 2 minutes left on a Allie Quigley corner three.

Vandersloot wore a baby blue Nike Kyrie 6 that matched her uniform. This colorway isn’t available, but you can find other colors at StockX and Dick’s Sporting Goods.

Not in Giannis’ House

Jimmy’s Heat got the W, but the Greek Freak got one over on Mr. Buckets on this play. The Miami guard tried to pack a two-handed slam but Giannis said “AntetokounpNO” with the rejection. With his long arms, it seemed Giannis could’ve blocked the shot with his elbow if he wanted to.

Antetokounmpo’s block came while wearing the “White Cement” Nike Zoom Freak 2, which hasn’t released yet. You can find other colors at StockX and Dick’s Sporting Goods.

The Beard Makes It Look Easy

James Harden always has a knack for dropping shots through the net. This bucket in particular makes you think “how?” The Beard easily drove to the rim before stopping to force contact with Dort. The foul topped James but not before he flipped up a shot underhand for the and-1 layup.

The black, green and blue adidas Harden Vol. 4 that James wore isn’t available, but you can find other colors at StockX, GOAT, and DicksSportingGoods.com

This Jordan Why Not Zer0.3 that Green busted out features navy blue portions mixed with gradient gray. This PE isn’t available, but you can find other Why Not Zer0.3s at StockX, GOAT, Flight Club and Dicks Sporting Goods.

Another Limited Pair of Jordans Worn by Tucker

Sneaker King watch sees another pair of rare Jordans rocked by P.J. Tucker. While not unreleased, the red “Steve Weibe” Jordan 10 he wore tonight is said to be limited to 230 pairs.

You can find this limited edition Air Jordan 10 at StockX and GOAT.