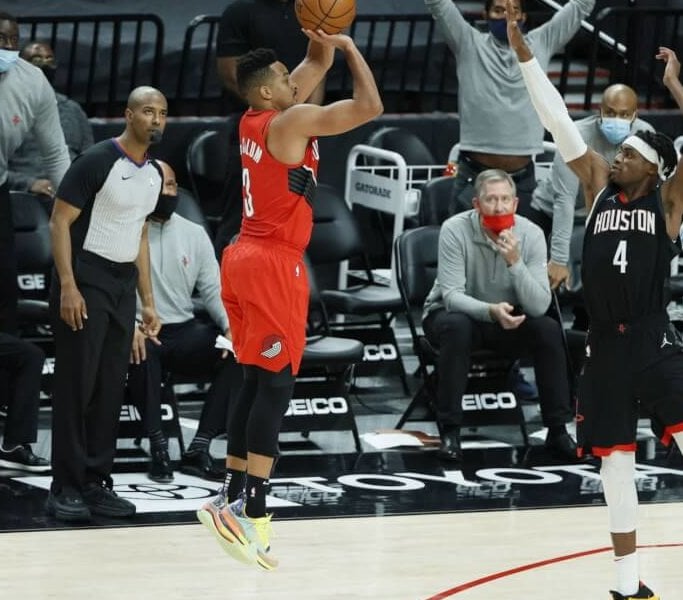 Welcome to Nightly Pro Notables: a collection of the hottest sneakers and the biggest moments of the night on December 26, 2020.

Tonight we saw an epic shooting guard battle between CJ McCollum and James Harden, all with trade rumors abound regarding the Beard. You can see CJ’s game winner below, as well as a clutch shot from Shai Gilgeous-Alexander. We also saw some trickeration from the likes of Markelle Fultz and Anthony Edwards, and a glitchy ball save that you have to see to believe.

Check below for all that, and the hottest sneakers on night 3 of the 2020-21 NBA season.

With Harden to Portland rumors reaching a fever pitch this week, CJ McCollum drowned out all the noise with a masterful OT performance. McCollum got hot in the 3rd to bring his Portland Trail Blazers back into the game, dropping a flurry of 3s for 14 points in the quarter.

CJ ended the game matching Harden with 44 points, but his 44th point was the from a game-winning 3:

McCollum rocked the Li-Ning Speed VII “Christmas Day” on this night, which you can find at ShopNings.com.

Despite all the signs pointing to Harden being unhappy with the Rockets, he still balled out in his season debut. Blazers defenders couldn’t do much when James is shaking and banking his dribbling.

Even with a depleted 7-man active roster, the Beard managed 17 assists on the night to go with his 44 points.

James rocked the Core Black and multi-color version of his adidas Harden Vol. 5, which is set to release on January 31 at adidas retailers.

CJ McCollum isn’t the only one making big shots in the clutch. Shai Gilgeous-Alexander is out here with all the guts with the score tied 107 all against the Charlotte Hornets. Shai put the Thunder on his back, with the rock under 5 seconds remaining. The OKC guard slashed the lane on Cody Martin, before splashing a long two-pointer with less than two seconds remaining.

The tie-dye Converse BB EVO that SGA rocked isn’t currently available, but you can find other Converse All-Star BB Evos at StockX and GOAT.

Number One Pick with One-Legged J

With shades of Dirk Nowitzki, the 2020 number 1 overall pick Anthony Edwards hit a one-legged jumper in only his 2nd NBA game. The shoulder nudge and fadeaway just showed how skilled Edwards is, let alone the the rock falling through the net.

Anthony wore the adidas Dame 6 in this game, with the white and blue colorway not available. You can find other colors at StockX and Dick’s Sporting Goods.

Speaking of number 1 picks, the top of the 2017 NBA Draft was dropping highlights as well. Markelle Fultz slashed the lane before navigating laterally. Orlando teammate Nikola Vucevic trailed behind him, with Fultz dropping a no-look, behind-the-back pass perfectly. Like the mascot, the assist was magic and led to an easy layup.

Markelle wore the “Bruce Lee” Nike Kobe 5 Protro, which can be found at StockX, GOAT, and Flight Club.

This play won’t show up in the statsheets, but it’s worth watching 10 times just to rub your eyes at what happened.

TJ McConnell either entered the matrix or glitched on 2K in this save, with the ball somehow spinning in such a way that the ball ran away from the nearest Chicago Bull and towards his Pacers teammate. If Fultz’s pass was magic, this is high sorcery.

The Navy Blue Nike Kyrie 6 that McConnell wore this game can be found at Dick’s Sporting Goods.

Ja Morant might be the most diversified sneaker wearer in the NBA, at least when it comes to Nike endorsers. After rocking the Grinch Kobe 6 in preseason, Ja went with the “Think Pink” colorway that reportedly will release in 2021.

You can find other Kobe 6 colorways at StockX, GOAT, and Flight Club.

Continuing to show his allegience to his brother’s kicks is Seth Curry rocking the Flow 8. Technically, the new Under Armour spin-off is called the “Curry Brand,” so Seth can see it as a family business.

This Chinese New Year colorway doesn’t have release date yet, but will drop in the coming months.