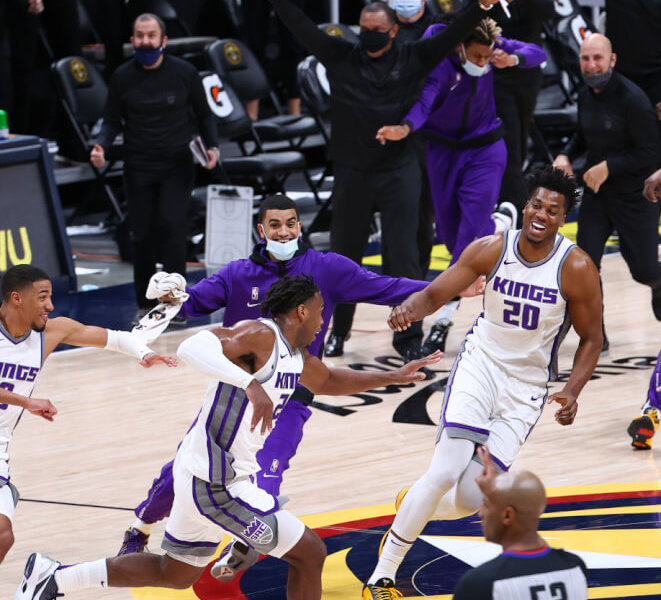 Welcome to Nightly Pro Notables: a collection of the hottest sneakers and the biggest moments of the night on December 23, 2020.

The first multi-game night of the 2020-21 NBA season saw plenty of action with youngsters dropping career and franchise highs. We also saw two game-winners already from the likes of Jayson Tatum and Buddy Hield. Sneakerheads will love to see the Kobes and Yeezy’s laced up tonight as well.

Without further ado, here are the best performances, highlights, and sneakers seen on day 2 of fan-less arena NBA hoops.

The Memphis Grizzlies only have three national TV games this season and after tonight, that’s a shame. Ja Morant made sure you had his squad on league pass alert with a career-high 44 points. He did it with flair too, going off the backboard on an assist to himself on this slam:

Ja rocked more heat in his second season, rocking the Nike Kobe 8 “What The” in the season opener. You can find this colorway at StockX, GOAT, Stadium Goods and Flight Club.

Out of all the players to don the purple and teal, Terry Rozier is on top with a franchise high 42-point game tonight.

From greatest scoring performance in Charlotte Hornets history, to the greatest cup of coffee ever (perfect transition), Rozier played up the Elf watching season with his kicks.

Rozier wore the “Elf” Puma Clyde All-Pro sneakers, which you can find at StockX.

It was deja vu for Buddy Hield has the Kings guard ran off the court in yet another game-winner. He did it years against the Pistons, and it was the Nuggets this time around who were shocked at the buzzer.

Sacramento pilfered Nikola Jokic with seconds remaining, with Harrison Barnes missing on the other end. Lucky enough, Hield got his hands on the rock, guiding the ball in the hoop with the clock reading 0:00. Like something out of the film Old School, Hield and his teammates ran energetically ran to the tunnel knowing they just stole one from a Western Conference contender.

Hield rocked the Nike Kobe 6 TB in Midnight Navy, which you can find at Flight Club.

Money in the Bank

Like another famous Celtic once said (as a Wizard, but still): “(he) called game!”

Jason Tatum had the ball with the shot clock running down and Giannis staring him down. Dribble moves had the reigning defensive player of the year just enough on his heels for the Tatum fadeaway to slip past him. The shot perfectly banked before falling through the net.

Jayson rocked a PE black and green Air Jordan 35 for this game. You can find other colors at StockX.

Yeah, Giannis missed the game-tying free throw this game, but he still got over on the Celtics on this play. Jayson Tatum thought he had an easy layup after a quick spin move but the Greek Freak came from the weak side to swat the shot near the sidelines.

Antetokounmpo wore a red and white Nike Zoom Freak 2, which isn’t available. You can find other colors at StockX, GOAT, and Dick’s Sporting Goods.

After almost a year on the market, the adidas Yeezy BSKTBL sneaker has finally appeared in an NBA game. The shoe was notably banned for the initial colorways having too bright of reflective material. They did make an appearance on the feet of Zach LaVine in the 2020 3-point contest, but Iggy’s appearance is the first in a game.

You can find the adidas Yeezy BSKTBL at StockX and GOAT.

Grinchmas is Upon Us

The night before Nike was set to release the Nike Kobe 6 Protro “Grinch”, Atlanta Hawks swingman DeAndre’ Bembry laced up the 2010 OG version. Merry Grinchmas to all our readers, you can find either Grinch Kobe 6 at StockX and GOAT.