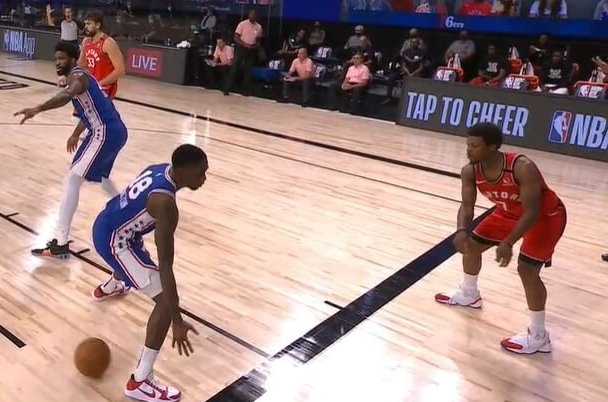 Welcome to Nightly Pro Notables: a collection of the hottest sneakers and biggest moments of the night on August 12, 2020.

On this night, the young’uns got the chance to shine with the seeding games running down and not much left to play for. We saw game winners and plenty of nutmeg passes. Check below for rare kicks from Victor Oladipo as well.

Another Huge Statline for Harden

Despite the loss, James Harden put up big numbers once more against the Indiana Pacers. The Beard put up 45 points, 17 boards, and 9 assists – narrowly missing another triple double.

With the bubble seeding games running down, young players are getting some time to shine on playoff rosters. In this case, it’s the Oklahoma City Thunder’s Mike Muscala came up big against the Miami Heat. Down 113-115, Muscala took advantage of space from a Darius Bazley drive and nailed the game-winning three.

You can find the Nike LeBron Witness 4 shoes that Muscala wore at Dick’s Sporting Goods.

Not to be outdone in the bench players big bucket category, the Toronto Raptors Stanley Johnson hit his own clutch shot today. This game was tied 121 all with Johnson getting double teamed with seconds remaining on the clock.

Stanley split the defense though and threw a nice pass to the cutting Dewan Hernandez. His shot was blocked right into Johnson’s arms, who immediately floated a shot for the go-ahead shot with 4.9 seconds left.

The black and gold Nike LeBron 3 Stanley Johnson rocked can be found at StockX, GOAT, and Stadium Goods.

Kyle Lowry was slick with the inbound passes today against the Philadelphia 76ers. Shake Melton was guarding the end line, but wasn’t watching the ball. Lowry slid a dime pass between Shake’s legs for the nutmeg, with a cutting Pascal Siakam laying the ball in thereafter.

Lowry rocked the adidas Harden Vol. 4 x Allen Iverson collab made to look like the Reebok Question with the red toe.

You can find this colorway at adidas.com and Hibbett Sports.

This day of bubble hoops was twice as nice with another nutmeg. This time around Goran Dragic played pick and roll to perfection, freezing OKC Thunder Steven Adams by self-nutmegging a pass to his Heat teammate.

Dragic rocked the “Ready For Change” custom adidas Dame 6. While not available, you can find other colors at StockX and Dicks Sporting Goods.

In the Pacers 7th bubble game, Victor Oladipo decided to bust out the recently released Air Jordan 10 “SoleFly”. This limited sneaker dropped exclusively at the Florida retailer of the same name and features white and linen touches.

You can find the SoleFly x Air Jordan 10 at StockX.