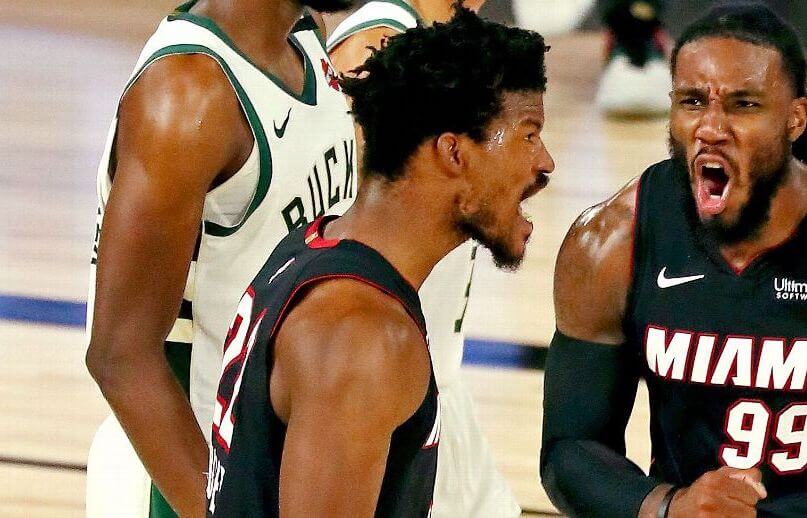 Welcome to Nightly Pro Notables: a collection of the hottest sneakers and biggest moments of the night on September 4, 2020.

Today we saw the Milwaukee Bucks on the brink of elimination thanks to Jimmy Butler taking over in the 4th. Similarly in the west, James Harden took over early to get a surprise game 1 win over the top-seeded Lakers.

We also saw kicks inspired by Super Mario, as well as some Lakers ties to the Greek Freak. Without further ado, here are the best highlights and sneakers from another night of Orlando bubble basketball.

Jimmy Butler was built for this moment. Buckets dropped 30 on the Milwaukee Bucks allowing his Miami squad to take a 3-0 series lead. The Heat guard outscored the Bucks by himself in the 4th 17-13:

The Beard Got in his Groove

After struggles offensively against the OKC Thunder, James Harden got his groove back in a shocking win against the LA Lakers.

The Beard dropped 25 of his 36 points in the first half, getting back to his usual step-back three-point game we’re accustomed to. James also was in his bag on this fast break slam over LeBron:

The Beard wore a black, orange, and green adidas Harden Vol. 4 seen below, which can be found at StockX.

LeBron Gets Over on Westbrook Twice

Despite his team taking the L, LeBron James added to his playoff highlight reel with two massive moments on Russell Westbrook. The first is a poster dunk over Russ, who inexplicably tried to take a charge on the King:

Later in the game, James completely erased a Westbrook layup attempt. The two-handed swat gave LeBron the easy rebound, then going coast-to-coast for the and-1 layup:

The Lakers star wore a very Los Angeles colorway of the Nike LeBron 7. The purple sneaker isn’t available, but you can find other colors at StockX, Flight Club, and Stadium Goods.

PJ Put the Clamps on AD

Very rarely will you see Anthony Davis struggle on offense, but the tenacious PJ Tucker did so on this play. The footwork was key here, constantly getting in Davis’ space without fouling. This defensive pressure forced an airball from the Brow.

PJ rocked a blue Las Vegas PE of the Nike Kobe 4 for this game. While not available, you can find other colors at StockX, GOAT, Stadium Goods, and Flight Club.

The 4th quarter nightmare for Giannis and the Bucks saw Bam Adebayo posterize the Greek Freak. On this play, Bam rolled hard to the rim with Antetokounmpo trying to block from behind. Adebayo threw it down with both hands though, topping Giannis to the ground from the force.

You can find the multicolor UNDFTD x Nike Kobe 5 Protro that Bam rocked this game at StockX.

Kyle Kuzma went against the grain tonight with red, white and blue sneakers to contrast the purple uniform. This is inspired by Super Mario 64, although there aren’t official signs of a collab with Nintendo.

This Puma RS-Dreamer can be found at Foot Locker.

Finally, we have a pair of sneakers that would have Lakers fans salivating. No this isn’t Giannis but rather his brother Kostas wearing a purple and gold Nike Zoom Freak 2.

This isn’t currently available, but you can find other colors at StockX, GOAT, and Dick’s Sporting Goods.